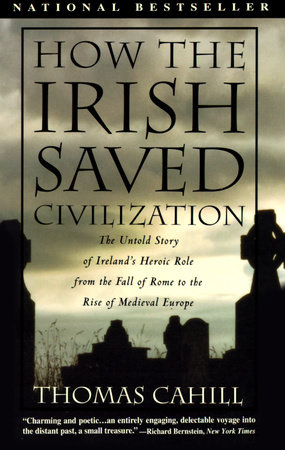 We normally think of history as one catastrophe after another, war followed by war, outrage by outrage–almost as if history were nothing more than all the narratives of human pain, assembled in sequence. And surely this is, often enough, an adequate description. But history is also the narratives of grace, the recountings of those blessed and inexplicable moments when someone did something for someone else, saved a life, bestowed a gift, gave something beyond what was required by circumstance. In this series, The Hinges of History, I mean to retell the story of the Western world as the story of the great gift-givers, those who entrusted to our keeping one or another of the singular treasures that make up the patrimony of the West. This is also the story of the evolution of Western sensibility, a narration of how we became the people that we are and why we think and feel the way we do. And it is, finally, a recounting of those essential moments when everything was at stake, when the mighty stream that became Western history was in ultimate danger and might have divided into a hundred useless tributaries or frozen in death or evaporated altogether. But the great gift-givers, arriving in the moment of crisis, provided for transition, for transformation, and even for transfiguration, leaving us a world more varied and complex, more awesome and delightful, more beautiful and strong than the one they had found.

"Charming and poetic . . . an entirely engaging, delectable voyage into the distant past." —The New York Times

The questions, discussion topics, and author biography that follow are intended to enhance your group’s reading of the first book in Thomas Cahill’s The Hinges of History series, How the Irish Saved Civilization.

How did a remote island sparsely populated by illiterate, semi-nomadic warrior barbarians become an emerald isle of saints and scholars who saved Western literature? In How the Irish Saved Civilization, Cahill tells us to look to men like Patrick, who was brought in chains to Ireland and dedicated himself to making sure nobody would ever arrive that way again. Grafting traditional Christian teachings to the positive elements of Irish myths and magic rooted in nature, Patrick planted a message that spoke directly to the Irish psyche and heart and brought a non-Roman form of Christianity to an island of people fierce in their traditions of loyalty, poetry, courage, and violence. From here, Cahill turns to the Irish scribes, monks who copied the great literature of the world, who approached their work with pride and playfulness, turning a task that many would consider dronelike into an art form. And when the monks take off to establish monasteries and spread Christianity throughout the world of early medieval Europe, they bring their books and replant the seeds of learning and scholarship in lands barren of these since the fall of the Roman Empire.

How the Irish Saved Civilization is the story of how an isolated island, too small and barbaric for the Romans to bother with, played a heroic role in saving Western civilization. It is a story of transition and movement–classical to medieval–a hinge of history that hasn’t been studied much before.

1. As the author notes, most historians describe periods of stasis, not movement, so that we miss out on the transition periods of history. Discuss this in light of the story the author tells in this book.

2. The author often gives us tableaus where he slips deep into the scene as it’s happening–the Roman soldiers facing the German tribes along the banks of the frozen Rhine, for instance. Talk about how he does this and how it depends on our understanding of the history he reports.

3. The possibility of "psychological fiction" [p. 41] came about because of Augustine’s Confessions. Discuss this breakthrough to the personal in prose.

4. The author gives a picture of Irish character that spans prehistoric to current times. Discuss character as a trait rooted in or heavily influenced by geography, weather, and culture.

5. Ireland, an island, had fewer outside influences on it than did many other cultures during the Pax Romana. Discuss isolation as a protective force, and a contributor to the idea that as Roman lands went from "peace to chaos," Ireland went from "chaos to peace" [p. 124].

6. Talk about the particular Irish women presented in this book–Medb, Derdriu, Brigid of Kildare, and Dark Eileen O’Connell–and the general Irish view of the role of women.

7. Discuss the difference between Patrick and Augustine’s "emotional grasp of Christian truth" [p. 115].

8. Talk about the Irish people’s ability to enjoy magic and superstition and pagan influences and yet convert wholeheartedly to Christianity.

10. As Columcille and Columbanus traveled in Europe and converted people to Christianity and established monasteries, they worked under the rubric of a democratic principle that "a man is better than his descent" [p. 176]. Discuss this as a change in previous and subsequent spiritualities, such as that of Augustine and the Rule of Saint Benedict.

11. Is power always corrupt? Discuss this in light of the Church conspiring with the enemy (Brunhilda) against its own messenger, Columbanus, and his Irish monks.

12. Discuss the cause and effect of the clash between the Roman Christianity of Augustine’s Canterbury and Celtic Christianity at the Synod of Whitby in A.D. 644.

13. Discuss how the intellectual Greek approach to thought died and the price that subsequent cultures paid for it at the Synod of Whitby or elsewhere.

14. Discuss De Divisione Naturae, John Scotus Eriugena’s theory of nature and reality, and Pope Honorius III’s order to burn all copies of it. From what the author presents here, talk about the difference between pantheism and what Scotus suggested.

For Discussion: The Hinges of History Series

1. Each book gives a piece that helps complete the picture of who we are, of our history, of our humanity and acts as a piece in a puzzle. How effective is this type of a reckoning of our past?

2. The author did not write the books in his series in strict chronological order. Instead he traces large cultural movements over many centuries. How does this choice affect the understanding of each book as a piece in the puzzle? Or as an individual work?

3. In his books, the author gets inside the heads and hearts of his subjects, using a very close third-person point of view. How does this choice strengthen his premise? Does it have limitations?

4. The author is Roman Catholic. Is he able to present these histories without being biased by his Catholicism? Does one’s religion (or lack of it) necessarily constrict or color one’s view?

5. Discuss the nature and history of the Irish and the Jews as read in these books. What are their ambitions, their differences? How do they differ from the Romans and the Greeks in all three books?

Thomas Cahill is the author of the bestselling books, How the Irish Saved Civilization, The Gifts of the Jews, and Desire of the Everlasting Hills, comprising Volumes I, II, and III respectively of the prospective seven-volume The Hinges of History series. A lifelong scholar, Thomas Cahill has studied with some of America’s most distinguished literary and biblical scholars. Born in New York City to Irish-American parents and raised in the Bronx, he was educated by Jesuits and studied ancient Greek and Latin. He continued his study of Greek and Latin literature, as well as medieval philosophy, scripture, and theology, at Fordham University, where he completed both a B.A. in classical literature and philosophy, and a pontifical degree in philosophy. He went on to complete his M.F.A. in film and dramatic literature at Columbia University. He studied scripture at New York’s Union Theological Seminary, and recently spent two years as a Visiting Scholar at the Jewish Theological Seminary of America, where he studied Hebrew and the Hebrew Bible in preparation for writing The Gifts of the Jews. He also reads French and Italian. In 1999, he was awarded an honorary doctorate from Alfred University in New York. Thomas Cahill has taught at Queens College, Fordham University, and Seton Hall University, served as the North American education correspondent for The Times of London, and was for many years a regular contributor to the Los Angeles Times Book Review. Prior to retiring recently to write full-time, he was Director of Religious Publishing at Doubleday for six years. He and his wife, Susan, also an author, founded the now legendary Cahill & Company, whose Reader’s Catalog was much beloved in literary households throughout the country. They divide their time between New York and Rome. Cahill is currently working on the fourth volume of The Hinges of History series, which explores the glories of Greek civilization.

The Princes in the Tower

The Princes of Ireland

The History of the Kings of Britain
Back to Top