The Stars Are Fire Reader’s Guide 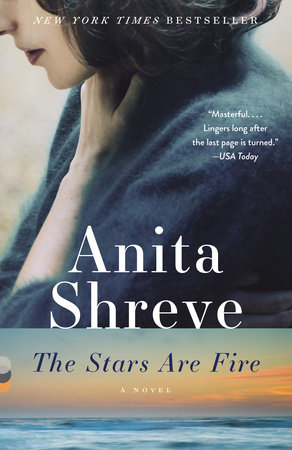 The Stars Are Fire Reader’s Guide

The questions, discussion topics, and reading list that follow are intended to enhance your reading group’s discussion of The Stars Are Fire, the new novel from beloved author Anita Shreve.

2. “Containerize, her own mother once told Grace, as if imparting the secret of sanity. Her mother meant children as well as dry goods.” (pages 9–­10) In what ways does Grace follow this advice? When does she disregard it?

3. Grace intends to seduce Gene on page 15, but the results are degrading and painful. If the novel were set in the present, might this be considered marital rape? How are things different now from in the 1940s?

5. Discuss Grace’s relationship with Rosie. Why is this friendship so important to Grace? What function does Rosie serve in her life?

6. Before reading The Stars Are Fire, what did you know about the fires that tore through Maine in 1947?

7. Can you think of anything Grace could have done differently to prepare?

8. After the fire, after losing the baby, Grace believes Gene may have used the chaos as cover for him to leave the family. What makes her think this? Would she rather that he fled, or died fighting the fire?

9. Why do Matthew and Joan take in Grace and the children? How does their action help her to heal?

10. At various points in the novel, Grace either ignores or heeds her intuition—­for instance, when Claire has a fever, or when Grace lets Aidan stay in the house. How does she decide when to follow her gut, and when to disregard it? Does her faith in her intuition grow over the course of the novel?

11. What do you think would have happened to Grace and the children if Marjorie hadn’t found them?

12. When does Grace begin to believe in her ability to survive and even thrive on her own? Is it purely a matter of necessity?

13. How does the notion of a “diaspora” figure into the story?

14. Which does more to pull Grace toward Aidan, their conversations or his music?

15. Why do you think Merle hid her jewelry where she did? What would have happened to Grace and the children if Grace hadn’t found it?

16. What prompts Grace to lie to her mother about Dr. Lighthart and about the money?

17. When Gene reappears, Grace thinks, “She will live in this house with this injured man on the couch until one of them dies. She will never again go to a job. She will never make love again. She will not have friends.” (page 175) What prompts her to find a way to escape this fate?

18. Are there any ways in which Gene’s rage about his situation is justified?

20. In her goodbye letter to Gene, Grace writes, “I think that if the fire hadn’t happened, we’d have continued as the little family that we were. In time, I believe, we would have come to care about each other in a way that was companionable.” (page 221) Without the upheaval of the fire, do you think Grace would have stayed in her marriage?

21. When Grace decided to drive north, where did you think she was going? Did the epilogue surprise you?

22. The novel ends on a serendipitous note. Did you find it satisfying?

Learn More About The Stars Are Fire
print

Before We Were Yours
Lisa Wingate
Back to Top