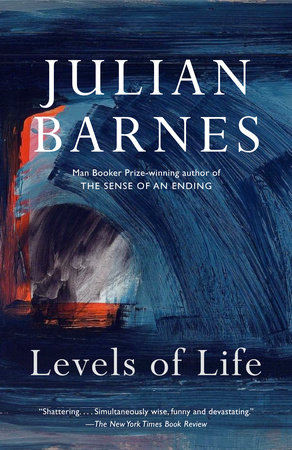 The introduction, discussion questions, and suggested further reading that follow are designed to enhance your group’s discussion of Levels of Life, the moving, genre-bending new work by Man Booker Prize winner Julian Barnes, author of The Sense of an Ending, Flaubert’s Parrot, and many other works.

Part cultural history, part short story, part memoir, Levels of Life defies classification. Instead, it demonstrates what its opening sentence asserts: that things brought together in unprecedented combinations have the power to change the world. In three distinct but subtly connected sections, Julian Barnes joins balloon flight and photography, an imagined love affair between two balloonists, and his agonizing grief over his wife’s death. Love and grief have certainly been brought together before; as Barnes notes, one nearly always follows the other. But rarely has a writer investigated his own grief with such unflinching honesty, fierce intelligence, and grace.

The first section, “The Sin of Height,” explores the history of balloon flight, humankind’s first successful method of transcending earthly constraints. Barnes focuses on three figures: an Englishman, Colonel Fred Burnaby of the Royal Horse Guards; the most famous actress of her time, Sarah Bernhardt; and France’s greatest portrait photographer, Félix Tournachon, known as Nadar. Barnes captures the ecstatic nature of the first balloon flights, the feeling of being free, as Burnaby would write, “from letters, with no post office near, no worries, and above all no telegraphs” [pp. 13–14]. Bernhardt feels that in flight she enters “not silence but the shadow of silence” [p.14]. But it was Nadar who combined balloon flight with photography and produced the first images of the Earth, of Paris, from a Godlike perspective—and thereby changed the world, or our perception of it.

The book’s second section, “On the Level,” is a fictionalized account of an affair between Burnaby and Bernhardt. It begins, ominously, with the ascent in an experimental balloon that ends in disaster, killing both pilot and co-pilot. And this love affair, despite the initial “roaring sense of uplift,” will likewise end in failure, and in heartbreak for Burnaby, as the Divine Sarah values her sexual freedom above all else. This confirms Barnes’s assertion that “every love story is a potential grief story. If not at first, then later. If not for one, then for the other. Sometimes, for both” [p. 39].

The final section, “The Loss of Depth,” shifts to Barnes’s grief story over the death of his wife, a loss that proves “greater than the sum of what was there,” which he acknowledges is both mathematically impossible and emotionally undeniable [p. 73]. In what seems another mathematical cruelty, Barnes writes that his marriage spanned thirty years, but it was just thirty-seven days from his wife’s diagnosis to her death.

Barnes subjects his mourning to an almost microscopic investigation, unfolding the potent mix of feelings—indifference, longing, agonizing sadness, the temptation of suicide, his unapologetic need to keep speaking to his wife, anger at his friends’ sometimes clumsy consolations. An atheist, Barnes must navigate his grief—“its tone and texture, its deceptions and false dawns, its recidivism” [p. 75]—without the benefit of religious solace or significance. Death, for Barnes, is “just the universe doing its stuff” [p. 81].

But Levels of Life extends beyond Barnes’s private grief to a larger cultural critique. We are bad at dealing with death, he asserts. Having lost the old metaphors—there is no underworld to descend into, as in the Orpheus and Eurydice story—we must find new ones. Levels of Life shows just how painful grief can be in the absence of such sustaining myths and metaphors, and while Barnes might not offer new passages to these mythic depths, he shows how—in a book of extraordinary self-revelation—we can still go down into dreams and memory.

1. Julian Barnes begins the book with a striking assertion: “You put together two things that have not been put together before. And the world is changed” [p. 3]. How are the seemingly disparate concerns of Levels of Life—love and grief, ballooning and photography, height and depth—brought together? In what ways are these themes connected? In what ways is the book itself an unprecedented act of joining, even as it is about loss and separation?

2. What is the effect of placing his essay on grief after the section on the history of balloon flight and aerial photography, and the fictionalized account of the love affair between Fred Burnaby and Sarah Bernhardt? Would the final section have been less affecting if Barnes had published it as a stand-alone piece?

3. Why does Barnes come to love opera—an art form he had formerly despised as overly dramatic—after his wife dies? What is it about opera that elicits such a powerful emotional response form him? Why does he call it his “new social realism” [p. 100]?

4. Discuss the implications of Barnes’s remarkable assertion that we seek out love, in spite its potential for grief, because “love is the meeting point between truth and magic. Truth, as in photography; magic, as in ballooning” [p. 39]. Why should the joining of truth and magic be so potent?

5. What did balloon flight represent to its first proponents, the “balloonatics”? What kind of freedom did it offer them? Why did some people feel that it in fact constituted a kind of hubris?

6. Why does Barnes assert that “we are bad at dealing with death, that banal, unique thing; we can no longer make it part of a wider pattern” [p. 75]? Why is this the case? What shared patterns, beliefs, and myths have we lost that might allow us to experience death in more meaningful ways?

7. What is Barnes suggesting when he writes that “the fact that someone is dead may mean that they are not alive, but doesn’t mean that they do not exist”? [p. 111].

8. Why does Barnes object so strongly to euphemisms like “passed” and “lost to cancer”? How does he react to the well-meaning and largely conventional consolation offered by friends—that he should get away for a while, or meet someone new, or that surviving grief will make him stronger?

9. Bewildered by his grief, Barnes asks: “What is ‘success’ in mourning? Does it lie in remembering or in forgetting? A staying still or a moving on? Or some combination of both? The ability to hold the lost love powerfully in mind, remembering without distorting? The ability to continue living as she would have wanted you to . . . ? And afterwards? What happens to the heart—what does it need, and seek?” [p. 122]. How might these questions be answered?

10.  Compared to most memoirists, Barnes is remarkably restrained about his wife, never mentioning her name or the cause of her death. Why might have he have made this choice? What is the effect of focusing so intensely on the experience and meaning of his grief rather than its source?

11. How does Barnes argue himself out of suicide? How does he justify continuing to talk to his wife after she dies? In what ways is his thinking on these questions both exceptional and perfectly logical?

12. Barnes gives readers an extraordinarily nuanced and searching meditation on grief. What are some of the most remarkable insights he offers in Levels of Life?

Julian Barnes is the author of eleven novels, three books of short stories, and three collections of journalism. In addition to the Man Booker Prize, his honors include the Somerset Maugham Award, the Geoffrey Faber Memorial Prize, and the E. M. Forster Award from the American Academy of Arts and Letters. He lives in London.
Learn More About Levels of Life
print

How Reading Changed My Life

A House of My Own
Back to Top