The Weight of Blood Reader’s Guide 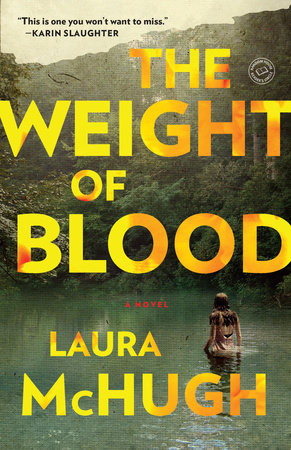 The Weight of Blood Reader’s Guide

A Conversation with Laura McHugh

You’ll never think of small-town life the same way again after reading Laura McHugh’s chilling debut, The Weight of Blood. Part Twin Peaks, part Tana French, the novel opens just after the body of eighteen-year-old Cheri has been found stuffed into a tree trunk. Lucy Dane may have been the troubled Cheri’s only friend, and after turning up some disturbing evidence she becomes determined to track down Cheri’s killer—especially since her own mother’s disappearance some fifteen years earlier has still never been solved. As Lucy’s quest proceeds, she begins to unearth the town’s darkest secrets, some of which involve her own family.

We asked McHugh, who lives in Missouri with her family, a few questions about her new book.

Trisha Ping: As a former software developer, you took an unconventional path to becoming a writer. Is it something you’ve always wanted to do?

Laura McHugh: I wanted to be a writer all along, but I had no mental road map of how to make that happen. I was a first-generation college student—my dad was a shoe repairman, my mom worked at Waffle House—and I had never heard of an MFA. We viewed higher education in a very practical way, as a ticket out of poverty. I studied creative writing as an undergrad, but for grad school I chose more technical degrees, ones that I thought would result in steady employment. I was a software developer for ten years, and then suddenly I lost my job. That’s when I completely reevaluated my life. I’d been writing short stories, had published a couple, and dreamed of writing a novel. I didn’t want to regret that I never tried. I feel incredibly lucky that things worked out the way they did.

TP: How did you come to write this particular story?

LM: My family moved to the Ozarks when I was a kid. The community was close-knit and wary of outsiders, and the surrounding area was home to groups that wanted to isolate themselves from the rest of the world. We lived down the road from the East Wind commune (a woman would sometimes jog topless past our school bus stop), and not far from the compound of a militia group called The Covenant, the Sword, and the Arm of the Lord. I was haunted by the place long after we left, and I wanted to capture what it was like to grow up in such an insular place, and also to show it from an outsider’s viewpoint.

In the midst of writing the novel, I came across a news article from the small rural town where I’d attended high school. A local teen had been victimized in a shocking crime, and the people involved had kept it secret for years. That crime was the inspiration for Cheri’s story.

TP: Small towns are usually associated with words like “peaceful,” “idyllic,” or “friendly.” Henbane is none of the above. Why were you drawn to depicting the darker side of rural life?

LM: For one thing, it’s in my nature—show me a seemingly idyllic town, and I’ll instantly wonder what’s hidden in the shadows. I grew up in a series of small rural towns, and they’re grittier than people might imagine. I’m also fascinated by the way crime plays out in these tight-knit communities where everyone knows (or is related to) everyone else. No one wants to speak out against their neighbor or their kin, or maybe they’d rather not involve the law. A good example is the murder of Ken McElroy in tiny Skidmore, Missouri. He was a bully and had gotten away with some serious crimes. The townspeople were fed up and decided to take action. McElroy was murdered in broad daylight in the middle of town, in front of nearly fifty witnesses, and not a single person would rat out the killers. (Also, no one called an ambulance.)

TP: On a similar note, thrillers are often very black and white—but your book definitely deals in shades of gray. Does that present challenges when writing suspense?

LM: I didn’t find it problematic while writing this book. Maybe it helped that I didn’t set out to write a thriller. I wanted to tell Lucy’s story, and I wanted the reader to keep turning the pages, and the story naturally became more suspenseful as it developed. I enjoy books with those murky shades of gray, but I’m not biased one way or the other—I like all sorts of thrillers, and I’ll read anything that grabs my attention and won’t let go.

TP: Without giving too much away, Lucy makes some dark discoveries about the adults in her life—people who care deeply for her might be capable of bad things. The novel is also a coming-of-age story, though, and these revelations mirror one of the rites of passage of growing up: learning that adults are people, too.

LM: You’re right, that’s an important part of growing up. I clearly remember having that revelation as a kid. It’s scary to realize that the grownups in charge are not necessarily making good decisions. For Lucy, as for most people, it’s difficult to process and accept the idea that a loved one might be capable of grave wrongdoing.

TP: You tell this story from several different perspectives. Which character was your favorite to write? Which was the hardest?

LM: Jamie Petree, the drug dealer who is obsessed with Lila, was my favorite. I’m not sure what this says about me, but I have always loved to write creepy characters—they come naturally to me. I liked being able to show Jamie from two different perspectives. We know how Lucy views him, and we also get to go inside his head and get a sense of who he really is.

Lucy’s mother, Lila, was the hardest. She started out a bit more innocent and naïve, but that wasn’t working. I had to let go and let her be a bit more troubled and troublesome.

TP: Although the violence is not at all sensationalized, bad things happen to girls and women in this book. I assume that’s something you thought about, as the mother of two young daughters. Do you think there are lines that fiction writers should not cross in this area?

LM: Truth is always stranger and more disturbing than fiction, and the things that happen to Cheri in this book don’t compare to what happened to the real-life victim who inspired her character. I did not want to portray violence against women in a way that was titillating or sensational, and I was careful about how I approached it in the book. That said, I wouldn’t put any limitations on fiction writers. Real life is so much more dangerous than a book that you can close and put away.

TP: What are you working on next?

LM: I am finishing up my second novel, which will also be published by Spiegel & Grau. A young woman witnessed the kidnapping of her sisters years ago, and now a terrible discovery forces her to question everything about her past, including her own memory. The novel is set in a decaying Iowa river town—I do love small towns and their secrets.

1. The Weight of Blood alternates narrators, giving us many of the characters’ perspectives, but mostly going back and forth between Lila and Lucy. What did you think of this dual narrative? Did it confuse you? Could the story have been told in one voice?

2. How do you interpret the relationship between Crete and Carl? Carl consistently turns a blind eye toward Crete’s questionable behavior. Do you think this is a weakness of Carl’s character, or do you believe that Carl is rightly loyal to his brother? If you were Carl, how would you handle your relationship with Crete? Would you have covered up Cheri’s murder?

3. The Weight of Blood ends with Lucy and Daniel together on a blanket, lost in their own world. Lucy tells us, “I let myself get lost in the moment, looking neither forward nor back, seeking nothing absent but embracing what was right in front of me.” How does this ending resonate with the rest of the story and the struggles Lucy has had to face?

4. The novel is set deep in the Ozark Mountains of Missouri, in a sparse and wild, dreary and deserted landscape. Describing the valley where her family first settled, Lucy tells us, “What was left of the homestead now was a cluster of tin-roofed out-buildings in various states of decomposition, a collapsed barn, a root cellar with its crumbled steps leading into the earth, and the stone foundation and chimneys of the main house. Walnut trees had sprouted in the spaces between the buildings [and there was] a single-wide trailer that looked out of place among the ruins but every bit as forsaken.” Discuss the role the setting plays in the novel.

5. Discuss the book’s title, The Weight of Blood. Ultimately, what does the novel have to say about “blood,” and the meaning of family? Did your interpretation of the title evolve from the beginning to the end of the novel? If so, how?

6. Throughout the novel, Lucy carries around the necklace she finds, a broken blue butterfly on a chain, until she leaves it with the flowers in the cave. Discuss the significance of the necklace.

7. Throughout the novel, Lucy carries around the necklace she finds, a broken blue butterfly on a chain, until she leaves it with the flowers in the cave. Discuss the significance of the necklace.

8. Discuss the friendships between Lila and Gabby and Lucy and Bess. How were they similar across the generations, and how were they different?

9. The novel leaves the question of who is really Lucy’s father unanswered. Who do you think it is? Do you think it matters? Why or why not?

10. What did you think about Ransome’s role in Crete’s operation? She did whatever she could to help the girls, without actually trying to stop Crete. Do you think her actions were cowardly? Do you think she had a choice?

Learn More About The Weight of Blood
print

Try Not to Breathe

I See You
Back to Top