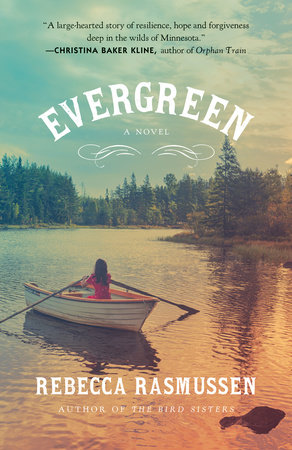 The questions, discussion topics, and reading list that follow are intended to enhance your reading group’s discussion of Evergreen, the luminous new novel by Rebecca Rasmussen, acclaimed author of The Bird Sisters.

Evergreen is a gorgeously rendered and emotionally charged novel that spans generations, telling the story of two siblings, raised apart, attempting to share a life.

It is 1938 when Eveline, a young bride, follows her husband, Emil, into the wilderness of Minnesota. Though their cabin is run-down, they have a river full of fish, a garden out back, and a new baby boy named Hux. But when Emil leaves to take care of his sick father, the unthinkable happens: a stranger arrives, and Eveline becomes pregnant. She gives the child away, and while Hux grows up hunting and fishing in the woods with his parents, his sister, Naamah, is raised an orphan. Years later, haunted by the knowledge of this forsaken girl, Hux decides to find his sister and bring her home to the cabin. But Naamah, even wilder than the wilderness that surrounds them, may make it impossible for Hux to ever tame her, to ever make up for all that she, and they, have lost. Set before a backdrop of vanishing forest, this is a luminous novel of love, regret, and hope.

1. The book’s epigraph is a quote from José Ortega y Gasset: “Tell me the landscape in which you live, and I will tell you who you are.” How does this prove true for Eveline, Hux, and Naamah?

2. Eveline’s arrival in Evergreen reads almost like a fable: “Eveline LeMay came after the water. She arrived on a cool morning in early September, asleep in a rowboat without paddles as if she knew the river currents would carry her past the tamarack and black-spruce forest, around Bone Island, a fen, and a bog, all the way to Evergreen and her new husband, Emil, who was waiting for her on the rocky shore”. How does Rasmussen use language to create a real world where less-than-realistic things happen?

3. When Emil tells Eveline, “What you do isn’t who you are”, what does he mean? How does this develop into a theme of the novel?

4. Years apart, Eveline and Lulu become pregnant after being raped. Each makes a difficult decision. What do their choices tell us?

5. Emil, Eveline, and Hux all practice taxidermy for different reasons. How does the author develop this as a metaphor? What does Tuna, the bird, represent?

6. The cabin’s previous resident left behind a letter, which ends with a piece of advice: “When the time comes to let go, let go”. How does Eveline use this advice? Who else lets go over the course of the novel, and what do they release?

7. Part Two, set at the Hopewell Orphanage, is quite bleak. How does the author use language and imagery to make the horrors endured by Naamah tolerable to readers?

8. The girls’ names are explained—nearly every girl’s first name is Mary, “ . . . as if Sister Cordelia didn’t want them to be told apart.” Naamah and Ethelina, though, have highly unusual names. How did Sister Cordelia identify these two infants as being different? Did their names somehow seal their fates?

9. Why does Cordelia choose Naamah to lead the girls in song?

10. Abandonment is a theme throughout the novel, but becomes especially important in this section. How does Cordelia’s abandonment by her own mother connect to what happens at the orphanage?

11. Why does the Bible passage, “There is no fear in love”, prompt Naamah to leave? Does Cordelia love Naamah, as she insists later to Hux?

12. When Hux learns that Emil knew about Naamah, he blames him for doing nothing. How might things have played out if he had acted?

13. Why does meeting Gunther prompt Naamah to move inside Hux’s cabin?

14. When Naamah chooses to live with Gunther, Hux thinks, “Gunther had always been able to do everything—catch a bucket of fish, chop down a tree, milk a goat—twice as fast as Hux. He’d made a life out of tracking wild things, taming them with the barrel of his shotgun, and mounting them on his walls. Hux had made a life out of preserving what was dead. Of course Naamah would go to someone like him”. Why is she really drawn to Gunther?

15. Why does Naamah go to the Mosquito Net for the first time?

17. What makes Ethelina so important to Naamah? How does her death spur Naamah into making such a calamitous decision?

18. Is Gunther a good parent? Did you expect him to be?

19. How do Lulu’s coat, Ethelina’s hat, and Racina’s purple boots act as talismans to the wearers?

20. Encroaching modernity has negative connotations throughout the novel—the flood caused by the dam, Cullen’s connection to attempts to bring light to the forest, the misery of the logging camps. What is the meaning of this?

Rebecca Rasmussen is the author of the novel The Bird Sisters. Her stories have appeared in or won prizes from TriQuarterly, Narrative Magazine, Glimmer Train, the Mid-American Review, and other publications. She was born and raised in the green and rolling Midwest. Currently, she lives in Los Angeles with her husband and daughter and teaches English part-time at UCLA.
Learn More About Evergreen
print