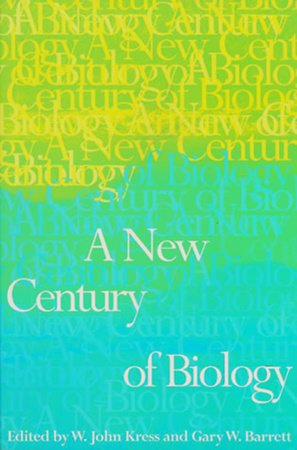 A New Century of Biology

About A New Century of Biology

In the twentieth century, scientists in the relatively new field of biology played an important role in exposing the threats of environmental degradation, loss of species diversity, habitat fragmentation, scarce energy resources, and human population growth. In the essays found in A New Century of Biology, some of the world’s most notable biologists consider how their discipline must evolve to address these problems in the twenty-first century.

The next one hundred years, the contributors argue, will likely be dominated by breakthroughs in evolutionary biology and systems ecology; by an increased need for scientists to integrate research, teaching, and service missions; and by problem-solving ventures on greater spatial and temporal scales. Because human activity and increased population will continue to have a profound impact on the environment, biologists must define an effective strategy for integrating the biological sciences with global economics and human social structure.

The eleven contributors are leaders in the fields of ecology, and evolution, morphology, and development, behavior, microbiology, ecosystem energetics and biogeochemistry, biodiversity and conservation biology, and human sciences. While acknowledging the real problems their discipline must address, they offer an optimistic agenda for the future.

A New Century of Biology