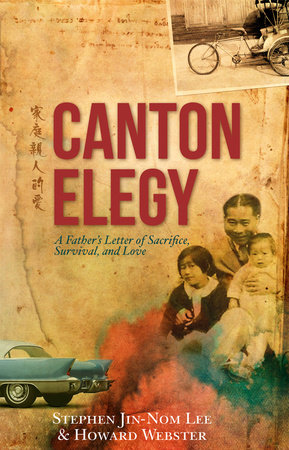 A Father's Letter of Sacrifice, Survival, and Enduring Love

By Stephen Lee and Howard Webster

By Stephen Lee and Howard Webster

Stephen Lee’s grandchildren knew him as a humble grocer. Beneath his humble exterior, however, lay one of the most extraordinary stories of the twentieth century.

Lee was born in Canton, China in 1902. As a teenager he was sent to live with relatives in San Francisco. He attended college at Iowa State and later transferred to UC Berkeley where he was one of the first Chinese-Americans to receive a degree. The widespread racism of the time prevented Lee from landing a job in his chosen field of finance, so he burned his papers and returned home to China.

With the clouds of war gathering, Lee, an anti-communist, found work in the accounting and logistics office of the Cantonese Air Force where he quickly rose to Colonel and comptroller. In 1929, after securing his position, he married a local beauty named Belle and in 1930, his first child, Amy, was born.

When the Japanese pushed south from Manchuria in 1936, the Cantonese Air Force was merged with that of Chiang Kai-shek’s and Lee was forced to flee with his wife and four children to Hong Kong. There Lee took a job with the Canton Trust Company. On the eve of the bombings at Pearl Harbor, the board of the Canton Trust made the fateful decision to send Lee to Kwelin to set up a new office. After Hong Kong fell to the Japanese, Belle and the children were force to flee on foot to Kwelin, which became a three hundred mile, six-week ordeal of hunger and hardship.

In 1943, Kwelin was evacuated and the Lees were once again on the move. Forced to play the part of refugees, the Lees moved up river, eventually landing in the small village of Foo-Luke outside of Chungking. There Stephen was invited to teach accounting at the local university. But tragedy soon struck again when a sudden flood nearly washed the family down the Yangtze River.

After the war, the Lees returned to Canton where they found that their home had been converted into an auto repair shop by the Japanese. Undaunted, Belle set about rebuilding it while Stephen helped return the city to civilian rule. By 1948, however, the Communists were bearing down on Canton and Lees were compelled to relocate again.

In 1955, the Lees fled for a final time–to America. Back in San Francisco, Lee found that attitudes towards Chinese immigrants had not changed much since he first left there 30 years before.

Canton Elegy is a love story, an adventure, and an intimate portrait of one family’s struggle to survive. Stephen Jin-Nom Lee, his beautiful wife, Belle, and their four young children, braved famine, flood, corruption, and the devastation of war, on their journey to America.

Written so that his grandchildren might one day understand the quiet man who ran the local grocery store, Canton Elegy has all the action of a Hollywood blockbuster. From the 300-mile journey Belle and the children take on foot, to the night when Stephen stands at his window watching Canton burn, Canton Elegy describes events with an artist’s sensibility and a poet’s heart.