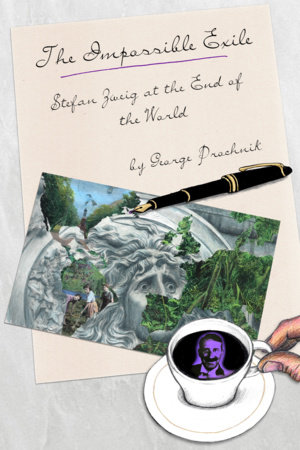 1. Are there exile stories in your own family that resonate with the experience of Stefan and Lotte Zweig? What does exile mean to you?

2. How do you feel Stefan Zweig’s very privileged but very rigid upbringing affected his character and work?

3. How would you compare Friderike and Lotte’s characters? What did the two women respectively find captivating about Zweig and was Zweig capable of returning the love they offered him?

4. Stefan Zweig felt that he’d failed in the most important mission of his life: the obligation to nurture a pacifist, cosmopolitan humanism.  In retrospect do you think he and other like-minded intellectuals failed as completely as Zweig thought they had? Or are there positive accomplishments of their cultural mission that outlasted the war?

5. How do you interpret the response of Stefan Zweig to New York and the United States in general? Why did so many of the Austrian and German refugees believe that the New World threatened the values they’d sought to champion in their lives and work?

6. The author says that Stefan Zweig believed education in racial tolerance and cross-cultural appreciation was the singlemost important step that could be taken toward fostering world peace. Do you agree and how do you feel that events since the Second World War support or refute this position?

7. Why did Stefan Zweig fall so passionately in love with France, calling that country his second homeland? What did he find there that he felt deprived of in Vienna, Berlin, London and New York?

8. Why did Stefan and Lotte choose to commit suicide in February 1942 when, in many ways, their lives were more stable and untroubled than they’d been in a long while? Friderike believed that Lotte’s passivity made her the worst possible companion for Stefan when he sank into his depressions, and further implied that if Stefan had stayed with her he would never have gotten to the point of killing himself, do you agree? Do you feel you understand why Lotte Zweig committed suicide with Stefan?

9. The author states that many of Zweig’s novellas and biographies depict individuals caught up in tides of emotion and history that are beyond their control. Why did the stories Zweig told, in which love and ambition were so often disastrously thwarted, prove so successful among readers? Why has Zweig’s popularity in much of Europe continued on unabated while in the United States he is still so marginalized?

10. How would you characterize Zweig’s relationship to his Jewish identity? Is it correct to view him as a stereotypically assimilated Central European Jew, or do you feel after reading the book that Jewishness was always a more pressing concern to Zweig, as he made it out to be in some public statements?

11. Are there lessons we can learn from Zweig’s story that might help us prevent a return to the sociopolitical conditions that led to his exile?

Ayn Rand and the World She Made
Anne Conover Heller and Anne C. Heller

The Story of a Life
Aharon Appelfeld

Memoirs from Beyond the Grave: 1800-1815
François-Réne Chateaubriand

All Rivers Run to the Sea
Elie Wiesel

Anna of All the Russias
Elaine Feinstein

And the Sea Is Never Full
Elie Wiesel

The Quest for Corvo
A.J.A. Symons

Clinging to the Wreckage
John Mortimer

Love and Other Ways of Dying
Michael Paterniti

The Story of My Life
Giacomo Casanova

A Guest in My Own Country
George Konrad

Kafka Was the Rage
Anatole Broyard