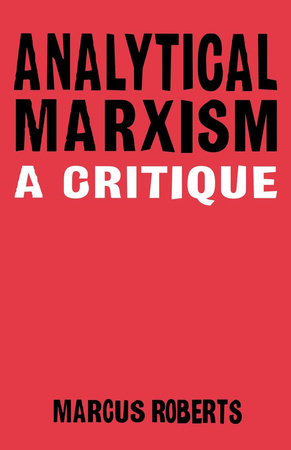 In the 1980s, leading philosophers at Oxford, Chicago and UCLA undertook a controversial reassessment of Marxism using the techniques of analytical philosophy. The aim of these so-called “Non-Bullshit” Marxists was no less than the complete reconstruction of Marxist theory, recasting it on a logical and rigorous basis, free from all metaphysical jargon and sentimentality.

Marcus Roberts’s study serves as a lucid survey of the Analytical Marxists’ contributions to the understanding of historical materialism, exploitation, class structure, method, politics and ethics—a panoramic tour de force which he brings up to date with considerations on John Roemer’s recent work on models of socialism.

Roberts charts the sinuous progress of the growth, development and ultimate dilution or disintegration of the bold theses originally put forward by such figures as Gerry Cohen, Jon Elster and John Roemer. For Roberts, the Analytical Marxist project, for all its elegance and richness, failed on its own terms, and in terms of Marxism more generally. However, as this book so persuasively demonstrates, along its winding route, the project raised questions of fundamental importance for social and political theory—questions that anyone interested in emancipation cannot avoid taking seriously.