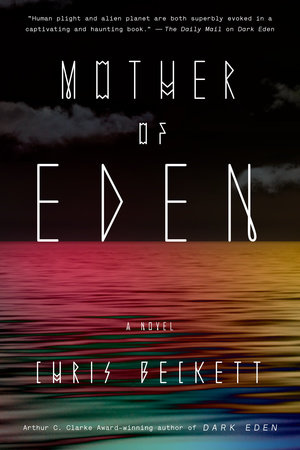 “We speak of a mother’s love, but we forget her power.”

Civilization has come to the alien, sunless planet its inhabitants call Eden.

Just a few generations ago, the planet’s five hundred inhabitants huddled together in the light and warmth of the Forest’s lantern trees, afraid to venture out into the cold darkness around them.

Now, humanity has spread across Eden, and two kingdoms have emerged. Both are sustained by violence and dominated by men – and both claim to be the favored children of Gela, the woman who came to Eden long ago on a boat that could cross the stars, and became the mother of them all.
When young Starlight Brooking meets a handsome and powerful man from across Worldpool, she believes he will offer an outlet for her ambition and energy. But she has no inkling that she will become a stand-in for Gela herself, and wear Gela’s fabled ring on her own finger—or that in this role, powerful and powerless all at once, she will try to change the course of Eden’s history.

“Poetic…Beckett renders the terror of the darkness beyond the forests with a riveting deftness that evokes all primordial fears of the unknown…There’s plenty here to intrigue and entrance.” –New York Times Book Review

“A linguistic and imaginative tour de force.” —The Guardian (UK)

“Captivating and haunting…human plight and alien planet are both superbly evoked.” —Daily Mail(UK)

“A stunning novel and a beautiful evocation of a truly alien world.”  —Sunday Times

“Pure astonishment and pleasure, a storytelling ride full of brio and wonder.” —Locus

“Brilliantly imaginative…a superb entertainment, a happy combination of speculative and literary fiction. Not to be missed.” –Booklist (starred)

“Riveting…a keenly imagined vision of the interaction between human nature and a truly alien world.” –BookPage

1. Eden has no day or night, no annual cycle of seasons; instead, the people of Eden have their own way of measuring time—three different ways, in fact. What might have led to the evolution of different time-telling methods?

3. How does a society like New Earth evolve? Why do the “small people” let it stay like that?

4. What function is played by the cutbats in the society of New Earth?

5. Starlight believes that men control women in New Earth, not because women are powerless, but because women seem to them very powerful indeed. Do you agree?

6. Starlight is viewed, in the course of this book, through the eyes of several other women, including her sister Glitterfish, Julie, Quietstream, Lucy Johnson, and the metaldiggers Clare and Mary. What does each see in her? How much do they see what is really there?

7. Is Greenstone weak? What would he be like if he was strong? Do we apply different criteria for “weak” and “strong” when talking about men and about women?

8. What has this book to say about the nature of power?

10. What is the significance of the Secret Story?

11. Can one generation pass on an important truth or insight to future generations in a way that will keep it intact?

12. As in Tolkien’s famous trilogy, a ring is very powerful in this story. What are the similarities and differences between this ring and the ring in The Lord of the Rings?

13. Among other things, this book could be described as dealing with the classic science-fiction theme of alien encounter. What is this book’s particular take on it, and how does it differ from other examples you have seen?

Chris Beckett is a university lecturer living in Cambridge, England. His short stories have appeared in such publications as Interzone and Asimov’s Science Fiction and in numerous “year’s best” anthologies.
Learn More About Mother of Eden
print

Iron Sunrise
Back to Top