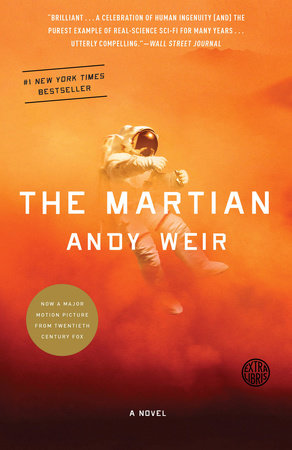 A castaway story for the new millennium, The Martian presents a fresh take on the classic man-vs-nature battle for survival by setting it on the surface of Mars—a planet completely hostile to sustaining human life. Yet debut novelist and self-proclaimed space nerd Andy Weir manages to make every moment of astronaut Mark Watney’s outer-space ordeal painstakingly realistic and believable.

After Mark Watney is injured, separated from his crew in a sandstorm, and left for dead, alone on the red planet and cut off from any communication, his first priority is tending to his injury and making it through the first day—or sol. Soon he realizes he must do more than survive the day—he must plan long-term if he is to live for years until the next mission is due to arrive.

At its heart, The Martian is a tale of survival of the geekiest. Mark’s scientific ingenuity, his radically inventive botanical solution to starvation, his ability to address seemingly insurmountable problems with rationality and practicality, his sanity-saving sense of humor, and his understated bravery becomes a moving testament to the human spirit. When the ground team at NASA and his crew discover he is alive, their commitment to rescuing one man against all odds likewise speaks to humanity’s deeply rooted sense of connection.

Ultimately, The Martian transcends its undeniable nerdy thrills of how to survive on Mars to celebrate human resilience. We hope the following questions will make your reading group’s experience truly out of this world.

1. How did The Martian challenge your expectations of what the novel would be? What did you find most surprising about it?

2. What makes us root for a character to live in a survival story? In what ways do you identify with Mark? How does the author get you to care about him?

3. Do you believe the crew did the right thing in abandoning the search for Mark? Was there an alternative choice?

4. Did you find the science and technology behind Mark’s problem-solving accessible? How did that information add to the realism of the story?

5. What are some of the ways the author established his credibility with scientific detail? Which of Mark’s solutions did you find most amazing and yet believable?

6. What is your visual picture of the surface of Mars, based on the descriptions in the book? Have you seen photographs of the planet?

7. Who knew potatoes, duct tape, and seventies reruns were the key to space survival? How does each of these items represent aspects of Mark’s character that help him survive?

8. How is Mark’s sense of humor as much a survival skill as his knowledge of botany? Do you have a favorite funny line of his?

9. To what extent does Mark’s log serve as his companion? Do you think it’s implicit in the narrative that maintaining a log keeps him sane?

10. The author provides almost no back story regarding Mark’s life on Earth. Why do you think he made this choice? What do you imagine Mark’s past life was like?

11. There’s no mention of Mark having a romantic relationship on Earth. Do you think that makes it easier or harder to endure his isolation? How would the story be different if he was in love with someone back home?

12. Were there points in the novel when you became convinced Mark couldn’t survive? What were they, and what made those situations seem so dire?

13. The first time the narrative switched from Mark’s log entries to third-person authorial narrative back on Earth, were you surprised? How does alternating between Mark’s point of view and the situation on Earth enhance the story?

14. Did you believe the commitment of those on Earth to rescuing one astronaut? What convinced you most?

15. To what extent do you think guilt played a part in the crew’s choice to go back to Mark? To what extent loyalty? How would you explain the difference?

17. Unlike other castaways, Mark can approximately predict the timing of his potential rescue. How does that knowledge help him? How could it work against him?

18. When Mark leaves the Hab and ventures out in the rover, did you feel a loss of security for him? In addition to time, the author uses distance to build suspense. Discuss how.

19. Where would you place The Martian in the canon of classic space exploration films like 2001: A Space Odyssey, Apollo 13, and Gravity? What does it have in common with these stories? How is it different?

20. A survival story has to resonate on a universal level to be effective, whether it’s set on a desert island or another planet. How important are challenges in keeping life vital? To what extent are our everyday lives about problem-solving and maintaining hope?

Learn More About The Martian
print

The Twelve (Book Two of The Passage Trilogy)
Back to Top