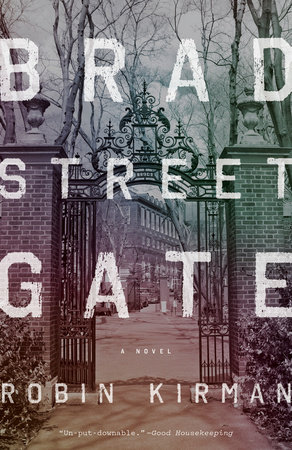 Georgia, Charlie, and Alice, the three protagonists of Bradstreet Gate, are Harvard students of divergent backgrounds and ambitions, all uniquely affected by the brutal killing of a classmate just weeks before graduation. The novel spans the young lives of these characters, from childhood through the campus tragedy and 9/11, ending with the ten-year memorial to their lost classmate. In that time, each character suffers unforeseen disasters and bears witness to the destruction of a Harvard Housemaster, Rufus Storrow, who never escapes the suspicions that shadowed him after the murder.

Bradstreet Gate is about many things, but for me it is foremost about the uncertainties that beset even the most promising youth to enter adulthood at the start of the millennium. Achieving this element of unpredictability was one of my chief aims while writing, and so I’d urge anyone who has not yet read the book to consult this guide either after finishing, or alongside your reading.  For this purpose, I’ve arranged the questions chronologically as much as possible.

Thank you for choosing Bradstreet Gate for your book club.  I hope you will enjoy it.

1.  The first two chapters of the novel depict Georgia at a ten-year interval. In chapter one, Georgia imagines the past year has done ‟the transformative work of a decade.” Do you agree that Georgia is much changed between the two chapters? In what respects?  How is her reaction to Nat Krauss’s questioning like or unlike hers to Officer Lombardi’s?  Why do you suppose the author chose to begin the novel this way: with the reporter’s arrival, and the unpleasant reminder of a murder ten years in the past?

2. Before Georgia confesses the history of her affair with Storrow (or part of it) to Officer Lombardi, she has never shared those events with anyone before. How does the act of describing her relationship seem to alter her ideas about it? When Georgia is afraid that Lombardi will form a different impression of her and Storrow than she intends, what do you imagine she fears he might think? In your view, is her affair with Storrow merely unconventional, as she claims, or something worse? Why do you think Georgia becomes sexually involved with a man she often seems to dislike?

3. In chapters 1 and 2, Georgia maintains that much of the suspicion aimed at Storrow has to do with others’ envious and negative feelings toward him—with who the man is, rather than with what he has or has not done. As you read forward, consider what it is that Storrow represents to those around him and what it is about him that elicits such strong reactions.  What do the differing reactions to Storrow reveal about the novel’s main characters (Georgia, Charlie, Alice, Julie)? How do their feelings for him reflect upon their histories, their relationships with other men in their lives, their ideas about authority, and their fears and fantasies? Who, in your view, seems to understand Storrow most truly or fully?

4. From a very early age, Charlie Flournoy thinks of himself as having been born on the margins of power. How does this understanding inform the choices he makes as a young man? What in Charlie’s background accounts for the most potent fantasies of his youth: about Harvard generally and about Georgia and Storrow in particular?  Do you find Charlie’s romantic view unique to him or representative of a larger cultural fascination with the campus and its most glamorous inhabitants?
Reading forward, consider which of these fantasies is destroyed or transformed by revelations about Georgia’s affair and Julie’s murder, and what part of them survives into Charlie’s post-collegiate life.

5. ‟Master language, master fate.” Alice’s childhood imparts upon her a lesson about the power of language. In what ways does the young Alice attempt to use language, and the written word, as a means of attaining control over others’ fates and hers?  What are the consequences of her behavior?  Do you find Alice’s choice to reveal Georgia’s affair as reprehensible as most of her classmates do?  In what ways might Alice’s example stand for the larger treatment of the murder in the media?  Or as a point of comparison for the author’s decisions about how to tell the story?

As you continue reading to the end, consider how Alice’s view about the role and responsibilities of the writer changes in the course of the novel.

6. Why do you think the author chose to have Alice and Georgia meet in a class on ‟the female icon in contemporary art” and have their first argument, and first real connection, take place over a discussion of a woman’s self-portraits? What does it mean that Alice first sees Georgia in a photograph and thinks of her, from afar, as an object of fantasy?  When Georgia imagines Alice’s attachment to her is often painful because it’s so strong, do you think she is right to believe this or naive?  How would you describe their bond, and would you define it as a friendship or not?

7. In chapter 5, Alice and Georgia are speaking about friendship and sexual attraction when Alice experiences ‟a fierce and clarifying anger” —what do you think this anger is about?  When, at the end of the chapter, Alice blames Georgia for her breakdown, why do you think she does this?  What do you believe to be the cause of Alice’s mental collapse during school? How are the causes the same or different than they are during her violent episode and breakdown in New York?
When Alice chooses to expose Georgia’s affair, do you think she acts out of this anger or for another reason?

8. The protagonists’ final months at Harvard are marked by a series of betrayals.  Do you feel that these actions speak to a fundamental disloyalty among the friends, or to the faults of youth, or to the force of events out of their control? As you read on, consider why it is that Georgia, Charlie, and Alice remain in contact in the intermittent and ambivalent ways they do.  Why do you suppose they still need one another and need to escape one another, too?  What would you say about the strength or weaknesses of their connections when they set off from Harvard and, later, by the novel’s end?

9. In chapter 11 Charlie asks: ‟If Julie was the soul of Harvard, what, then, was Storrow?” In which ways are the two characters, Julie Patel and Rufus Storrow, representative of an evolving idea of Harvard?  How might this fact, if true, be connected to their conflict? Does the tension between them (real and/or imagined) reflect upon changes in society in general?

10. Charlie, Alice, and Georgia are all in some way affected by the events of 9/11. Consider their various responses, and how, in each case, this reflects upon their natures.

11. During Georgia’s meeting with Storrow in Mumbai, he speaks of his time in India as a kind of penance.  Do you believe this to be true in his case? Or in Georgia’s? In what ways might Georgia’s move to India be motivated by guilt, and in what ways consistent with tendencies of her character displayed before the murder?  How does Georgia’s time in India, including her conversation with Storrow, affect her sense about the past or alter her future course?  How does Mumbai mirror or contrast the society she’s left behind?

12. Before her second breakdown, Alice tells her ex-boyfriend Nick: ‟What if you and all these other assholes and this whole bullshit spectacle have been arranged merely for the purpose of my redemption.”  As you follow Alice’s progress through the latter sections of the book, consider whether you believe the events of the novel function in this way: Is Alice on a journey toward salvation, or is she merely scrambling to survive her disabilities? When Alice visits the Patels, why do you imagine she goes? Is it an act of remorse or selfish impulse? What of her decision to help establish a foundation in Julie’s name?

13. When Charlie encounters Storrow in D.C., he concludes that the man is trying to reinvent himself according to a more updated model.  What do you make of the particular changes Storrow is effecting: his new physical appearance, his Indian family, his cynicism about Charlie’s government partners?  What understanding about the causes of his downfall, or his chances to rise again, do they seem to suggest?  How does the ‟reincarnated” Storrow change your perceptions of the man as presented earlier, and how, if at all, does Storrow’s later behavior affect your sense about his innocence or guilt?

14. In chapter 24, Alice returns to the idea that language is power, and, in the context of her own servitude to the Friedlanders, concludes that language has less force than money.  Is this a reversal of her earlier beliefs or a consistent view? What ideas about power do the other main characters possess and how do they compare to hers?  Who do you believe possesses power in the story—of what sort, and how lastingly? What ideas about the nature of power, in general, does the novel suggest?

15. On the ferry ride to the memorial ceremony, Charlie reflects upon memory and the passage of time.  Ten years after the murder, how have each of the characters attempted to engage with, or escape, their pasts?  Who seems to you to have achieved the broadest or sharpest understanding of the events of the book, and who seems best poised to move forward living happily and well?  Is it fair to say that any of the characters have been redeemed, or are their positions at the end of the story, morally and practically, still fundamentally unsettled?

16. Storrow is a deliberately evasive character: in many ways the least graspable in the novel. What in Storrow’s various stories about himself seems most suspect to you, and where do you feel he speaks or reveals the truth?  Does hearing of his history in Flynn’s report make him more comprehensible or alter your feelings about him?  What of the revelations Alice offers of their encounters at Harvard? Or the final account of Storrow’s disappearance? How do you make sense of the many questions surrounding Storrow by the novel’s end?

17. If, as Alice imagines in the final chapter, Charlie and Georgia are to make a try at a romantic relationship at last, why do you imagine this happens now? What stood in the way of their loving each other before, and what, if anything has changed to improve their prospects? Do you agree with Charlie’s assessment that what he loves can’t be Georgia but the reminder she offers him of his younger self?  Or do you take their reunion to be a hopeful statement about the possibility of forgiveness and of second chances?

18. The ending of the book leaves the question of Storrow’s role in the murder unresolved: How does this ambiguity reflect on other themes and questions raised in the novel? What meaning does Julie Patel’s death take on for you, given that the reader never discovers precisely what happened?  What might be some of the reasons for choosing to end the novel as the author does: from Alice’s perspective, and with reference to legal and divine judgment and the uncertainty of innocence?

Let Me Die in His Footsteps

Afterwards
Back to Top