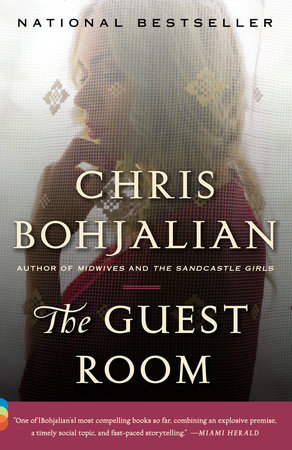 The following guide has been designed to aid your discussion of Chris Bohjalian’s newest novel of domestic suspense, The Guest Room.

When his calendar permits, Chris Bohjalian is available to meet with reading groups via Skype or speakerphone. Visit http://www.chrisbohjalian.com/reading-group-center for details.

Renowned for his spellbinding storytelling, bestselling author Chris Bohjalian now brings us a captivating novel that exposes a chilling reality, raising eye-opening questions about the nature of evil—and the power of compassion.

The Guest Room opens in the aftermath of a bachelor party gone horribly wrong. When Kristin Chapman agrees to let her husband, Richard, host his brother’s celebration, everyone expected a wild night, but nothing could have prepared them for what transpires after two strippers arrive. As the debauchery escalates under the watchful eye of Sonja and Alexandra’s “bodyguards,” one of the girls suddenly brandishes a knife. She and her partner attack their two keepers with deadly precision and drive off into the night, making their way from the suburbs of Westchester to Manhattan. A police investigation reveals that they are teenagers from Armenia, abducted and forced into sexual slavery in Russia before being brought to New York, where their captors knew their value would skyrocket.

For Richard and his wife, Kristin, nothing is safe from the fallout of the scandal: Richard’s job at an investment banking firm is now in jeopardy, and their once-stable marriage is tested in ways they could never have imagined, while their 9-year-old daughter struggles to comprehend what’s happened. But Sonja and Alexandra face a much graver danger, fleeing both the police and an international network of oligarchs. Without a passport or credit cards, Alexandra realizes that the key to survival was left behind in Richard’s house, where a tiny slip of paper will surely set her free.

Destined to spark important conversations about trust, truth, and the millions of modern-day slaves hidden in plain sight, The Guest Room is a riveting read that will transform the way you see the world. We hope this guide will enrich your reading group’s discussion.

1. When Anahit is forced to become Alexandra, what happens to her sense of self? How is she able to secretly retain many aspects of her true identity—particularly her sense of humor and her intellect? How does she navigate the multitude of cultures beyond her Armenian homeland? How would you fare in her situation?

3. If the bachelor party had featured strippers or prostitutes who had freely chosen their line of work, would you call the debauchery harmless? Is a career in the sex trade ever freely chosen?

4. Discuss the psychological tactics Alexandra’s captors use against her. Is there anything she and her beloved grandmother could have done to see through Vasily’s promises?

5. How will Melissa be affected by the aftermath of her uncle’s party? How will these memories shape her understanding of a woman’s role in the world, and the nature of suffering?

6. Is Spencer simply motivated by money, or does he also crave power? How much does he have in common with Kirill and Pavel?

7. At the end of chapter 5, Alexandra says she never had faith in hatred, like Sonja did. What accounts for the differences between Sonja and Alexandra? What is the source of Alexandra’s resilience and her inability to become “good at hatred”?

8. Are most of the men you know similar to Richard, or are they more like his brother, Philip? Are Alexandra’s images from The Bachelor totally unrealistic?

9. How were you affected by the story Alexandra tells Richard about the crates of Barbie dolls? How do her memories of the dolls compare to Melissa and Kristin’s visit to FAO Schwarz?

10. As Alexandra and Richard struggled to be free of their separate turmoil, what outcomes were you envisioning for them? How did the ending compare to your predictions?

11. How did The Guest Room enhance your experience of other novels by Chris Bohjalian? What’s special about the worlds he brings to life in his storylines?

12. Although it’s a work of fiction, The Guest Room opens our eyes to the tragic reality of human trafficking. How can a novel spur change? How is a novelist’s approach different from that of journalists?

13. What should we teach our daughters and sons about sexuality and exploitation? Does sex appeal make a woman powerful, or does it make her vulnerable?

To learn more and become part of the solution, visit www.castla.org, the site for the Coalition to Abolish Slavery and Trafficking. CAST is one of the many important organizations that work to assist persons trafficked for the purpose of forced labor, sexual slavery, and other instances of appalling human rights violations.

• According to the U.S. State Department, perhaps three-quarters of a million people are trafficked across international borders every year—and then there are the millions trafficked within their own countries.
• The International Labor Organization estimates that 14.2 million people are victims of forced labor exploitation in economic activities, such as agriculture, construction, domestic work, and manufacturing. The ILO also estimates 4.5 million people were forced into sexual exploitation globally in 2014.
• About two million children every year are exploited in the global commercial sex trade.
• The National Center for Missing & Exploited Children estimates that one out of every six runaways is a likely sex trafficking victim.

If you are in an emergency situation or have a credible tip, call the CAST 24-hour hotline to speak to an emergency responder: 1 (888) KEY-2-FREEDOM.

Chris Bohjalian is the author of eighteen books, including Close Your Eyes, Hold Hands; The Sandcastle Girls; Skeletons at the Feast; The Double Bind; and Midwives, which was a number one New York Times bestseller and a selection of Oprah’s Book Club. His work has been translated into more than thirty languages, and three of his novels have become movies (Secrets of Eden, Midwives, and Past the Bleachers). He lives in Vermont with his wife and daughter. Visit him at www.chrisbohjalian.com or on Facebook.

Gish Jen, World and Town; Stieg Larsson, The Girl Who Played with Fire; Jane Mendelsohn, Burning Down the House; Patricia McCormick, Sold;
Learn More About The Guest Room
print
Back to Top