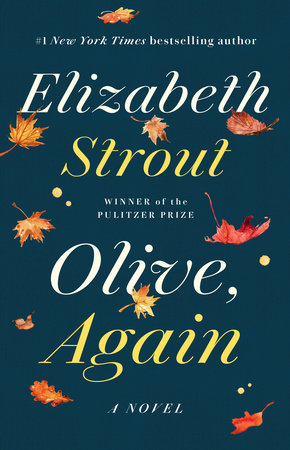 2. If you read Olive Kitteridge, do you feel Olive has changed in Olive, Again? If so, in what ways? If not, what about her has stayed the same?

3. During a fight with her son, Christopher, Olive realizes “that she had been frightened of her son for years.” How does she come to this realization? How does it influence how Olive thinks of herself as a mother?

4. Watching Ann yell at Christopher, Olive realizes she had yelled at her late husband, Henry, in much the same way. What does she come to accept about herself as a person? How does she ask for forgiveness?

5. In today’s climate of increased awareness about sexual harassment, how did you feel reading “Cleaning,” the chapter about Kayley and Mr. Ringrose? Would you qualify it as a type of harassment, or did you feel Kayley was empowered and exploring her sexuality? Does the fact that Mr. Ringrose left Kayley money complicate any of your feelings?

6. Consider this passage: “These were openings into the darkness of a relationship one saw by mistake, as if inside a dark barn, the door had been momentarily blown off and one saw things not meant to be seen.” Do you think all relationships have a secret darkness that outsiders don’t see, or do only troubled relationships have this?

7. Strout writes that there were a few nights during Jack’s marriage to Olive where “he had sat on the front porch and had—half drunk—wept, because he wanted to be with Betsy instead.” How did you interpret this? Did it feel like a betrayal (even involuntarily) to you, or simply a fact of life?

8. Bernie and Suzanne have an interesting relationship. What are the different secrets and experiences that bond them together? How did they both help each other? Do you think it’s rare to see an emotionally—but not physically—intimate relationship like theirs in fiction? What about in real life?

9. Bernie tells Suzanne she doesn’t need to tell her husband about her affair. She clearly believes it’s a mistake and isn’t planning to repeat it. Do you agree with Bernie’s advice? Is it ever smarter to keep a secret like that, or do you believe one must always tell the truth?

10. Olive and Cindy, who might be terminally ill, have an interesting conversation about death. They both admit to being afraid of it, but Olive—in her special way—comforts Cindy by reminding her, “The truth is—we’re all just a few steps behind you. Twenty minutes behind you, and that’s the truth.” Was this notion a comfort to you? What do you think would happen if people, even those who aren’t terminally ill, started speaking more openly about death?

11. When Olive is talking about her marriage to Jack with Cindy, she says, “Imagine at my age, starting over again.” Then she adds, “But it’s never starting over, Cindy, it’s just continuing on.” Why do you think she corrects herself in this way? What different connotations do those two phrases—starting over and continuing on—hold?

Behold the Dreamers
Back to Top