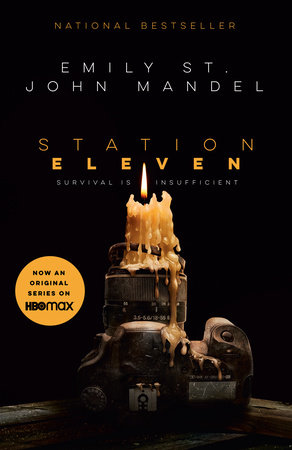 The questions, discussion topics, and reading list that follow are intended to enhance your reading group’s discussion of Station Eleven, the dazzling novel by acclaimed author Emily St. John Mandel.

An audacious, darkly glittering novel about art, fame, and ambition set in the eerie days of civilization’s collapse, from the author of three highly acclaimed previous novels.

One snowy night a famous Hollywood actor slumps over and dies onstage during a production of King Lear. Hours later, the world as we know it begins to dissolve. Moving back and forth in time—from the actor’s early days as a film star to fifteen years in the future, when a theater troupe known as the Traveling Symphony roams the wasteland of what remains—this suspenseful, elegiac, spellbinding novel charts the strange twists of fate that connect five people: the actor, the man who tried to save him, the actor’s first wife, his oldest friend, and a young actress with the Traveling Symphony, caught in the crosshairs of a dangerous self-proclaimed prophet. Sometimes terrifying, sometimes tender, Station Eleven tells a story about the relationships that sustain us, the ephemeral nature of fame, and the beauty of the world as we know it.

1. Now that you’ve read the entire novel, go back and reread the passage by Czeslaw Milosz that serves as an epigraph. What does it mean? Why did Mandel choose it to introduce Station Eleven?

2. Does the novel have a main character? Who would you consider it to be?

3. Arthur Leander dies while performing King Lear, and the Traveling Symphony performs Shakespeare’s works. On page 57, Mandel writes, “Shakespeare was the third born to his parents, but the first to survive infancy. Four of his siblings died young. His son, Hamnet, died at eleven and left behind a twin. Plague closed the theaters again and again, death flickering over the landscape.” How do Shakespearean motifs coincide with those of Station Eleven, both the novel and the comic?

4. Arthur’s death happens to coincide with the arrival of the Georgia Flu. If Jeevan had been able to save him, it wouldn’t have prevented the apocalypse. But how might the trajectory of the novel been different?

5. What is the metaphor of the Station Eleven comic books? How does the Undersea connect to the events of the novel?

6. “Survival is insufficient,” a line from Star Trek: Voyager, is the Traveling Symphony’s motto. What does it mean to them?

8.  Certain items turn up again and again, for instance the comic books and the paperweight—things Arthur gave away before he died, because he didn’t want any more possessions. And Clark’s Museum of Civilization turns what we think of as mundane belongings into totems worthy of study. What point is Mandel making?

9. On a related note, some characters—like Clark—believe in preserving and teaching about the time before the flu. But in Kirsten’s interview with François Diallo, we learn that there are entire towns that prefer not to: “We went to a place once where the children didn’t know the world had ever been different . . . ”. What are the benefits of remembering, and of not remembering?

10. What do you think happened during the year Kirsten can’t remember?

11. In a letter to his childhood friend, Arthur writes that he’s been thinking about a quote from Yeats, “Love is like the lion’s tooth.”. What does this mean, and why is he thinking about it?

12. How does the impending publication of those letters affect Arthur?

13. Arthur remembers Miranda saying “I regret nothing,” and uses that to deepen his understanding of Lear, “a man who regrets everything,” as well as his own life. How do his regrets fit into the larger scope of the novel? Other than Miranda, are there other characters that refuse to regret?

14. Throughout the novel, those who were alive during the time before the flu remember specific things about those days: the ease of electricity, the taste of an orange. In their place, what do you think you’d remember most?

15. What do you imagine the Traveling Symphony will find when they reach the brightly lit town to the south?

16. The novel ends with Clark, remembering the dinner party and imagining that somewhere in the world, ships are sailing. Why did Mandel choose to end the novel with him?

EMILY ST. JOHN MANDEL’s five previous novels include The Glass Hotel and Station Eleven, which was a finalist for a National Book Award and the PEN/Faulkner Award for Fiction and has been translated into thirty-two languages. She lives in New York City with her husband and daughter.

The Twelve (Book Two of The Passage Trilogy)