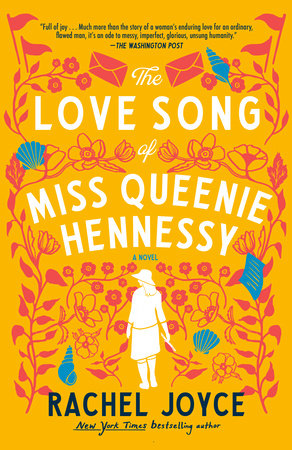 A Letter from Rachel Joyce

Dear Friend of Harold Fry,
When The Unlikely Pilgrimage of Harold Fry was first published, a few people asked if I would be writing a sequel. I quickly assured them that I would not. I felt that I had said everything I needed to say about Harold and Maureen and it was time to let them get on with life, without me watching and taking notes. The person I didn’t consider was Queenie Hennessy, Harold’s friend: the woman whose first letter inspired a walk that changed Harold Fry’s life and, to some extent, mine. She remained very quiet (which is exactly the sort of thing Queenie would do), and then out of the blue one day she shouted, “Here I am!”

It was not good timing. I was twenty thousand words into a new book. I was also working on a radio piece. The last thing I needed was to start writing something else. But then there I was in the kitchen with my children when Queenie’s story arrived. It was one of those ideas that come in a flash, but fully dressed, so that you feel they’ve been around a long time. I told my children because it was so exciting, this idea, I couldn’t keep it to myself. And my children said something along the lines of “Yes, very good. Now, what’s for lunch?”
That night I barely slept. I had Queenie’s words, her stories, spinning in my head. I didn’t know if any of those words made sense, but I did know that I was at the beginning of something and that I would have to stay with it and find the whole story. In the morning, when I looked again at The Unlikely Pilgrimage of Harold Fry, it occurred to me that in truth I’d had the idea of writing from Queenie’s perspective long before—­I had written one small piece, that taste of her voice, in the Harold Fry chapter “Queenie and the Present.” I’d had the idea and I hadn’t quite seen it.

Over the last few years, I have talked a lot about Harold Fry. But sometimes people have asked me about Queenie, too. And there have been a few readers, I admit, who have asked, Why? Why did I have to give Queenie her disfiguring cancer? I always explain—­as gently as I can, although it is still an emotional answer for me—­that this was how it was for my father and I felt I must be true to that. But that answer has also bothered me, because although my father’s cancer was terrible to look at by the end, it wasn’t him. When I think of him now, for instance, I think of the man who was my father before the cancer. I think of him laughing or calling “Watcha, Rache!” or walking past the window with a ladder. It is the same with Queenie. She had a voice, a life, before she was the woman we find in a hospice at the end of the book. I wanted to discover all that. When Queenie retells the story from her own perspective, she never uses the word “cancer,” and she barely refers to her appearance. The cancer is not her journey. Her journey is one of reparation. In telling her story, she becomes whole.

My father died at home. He was not in pain. So to write this book, I spent time with several Macmillan Cancer Support nurses and visited two hospices for the terminally ill. Before I went, I felt fearful. Would I see anything I shouldn’t? Would I be frightened? Make a fool of myself and cry? But what struck me about both the hospices and the nurses was the life in them. The joy. The hospices were full of light, full of activity, and full of laughter. The nurses I met had endless hilarious stories to tell. And so I set out to write a book about dying that was full of life. It seems to me that you can’t really write about one without the other—­just as you can’t really write about happiness if you don’t confront sadness. It’s by looking at the whole shape of something, I think, that you see it for what it is.

In the hospices we talked a lot about dying. We talked, too, about my father and his own death. At the end of one meeting, the manager said to me, “You need to write this book.” I probably cried, because it had been an emotional day. But I cried also because he was right.
And so I made my own hospice, St. Bernadine’s. Several patients arrived—­quite shady in my mind to begin with, but gathering color and volume as I wrote. They became a sort of chorus for Queenie—­her backing vocalists, if you like. The nuns who look after these patients were inspired by the community of seven nuns who live in our village in Gloucestershire. I saw one of them the day we first came to see the house—­a figure walking the land in a cream robe and black apron—­and there was something so serene about that picture that these nuns instantly became part of my experience of where I live. Only yesterday I opened the gate to fetch my car and found a nun pressed against our garden wall. She seemed to be waiting for something, or possibly blowing her nose. I have no idea, really, but whatever it was, she was very good-­humored about it.

In order to find Queenie’s home, her beach house, I returned to Berwick-­upon-­Tweed with my husband and children and we visited the stunning Northumberland coastline. I went back twice more. It was on our final visit—­the weekend before I submitted the typescript—­that we found Embleton Bay and the wooden beach houses up on the cliff. Queenie’s house is one I made in my head, but if you ever go to Embleton Bay, you will find a set of sand steps carved into the dunes that might once have led to her garden.

Queenie’s sea garden began as just that—­three words. It was after studying Northumberland gardens and coastal paths that my imagination planted her sea garden with flowers and driftwood figures. I am glad she has those. She fills her garden with the people in her life in the same way that I fill my writing with the people in mine. And, by the way, my children are very glad to see that our old border terrier, Dog, is back.

It has been an extraordinary thing for me to revisit Harold Fry and replay some of those chapters with a new twist. It has been something, too, to give Maureen a different voice, and David—­and to find the Harold Fry that Queenie and indeed Maureen fell in love with. For me, it isn’t just Queenie who feels put back together; it is them, too.

I would call this book a companion.

1. Rachel Joyce says that she has written a book that sits alongside The Unlikely Pilgrimage of Harold Fry. Did you read Harold Fry before reading The Love Song of Miss Queenie Hennessy? If so, how did it enhance your reading? If not, what was your first impression of Harold, as seen from Queenie’s point of view?

2. Joyce begins the novel with Queenie’s letter and a confession to Harold: “I will confess everything, because you were right that day. There were so many things you didn’t see. There are so many things you still don’t know.” In addition to giving the novel urgency, are the letters and postcards scattered throughout the novel effective touchstones for the journeys both characters are on?

3. Joyce weaves significant scenes from St. Bernadine’s Hospice into the novel. Did you have preconceived notions of what a hospice is like? Did those scenes change your view? Why  do you think it was important for Joyce to infuse humor into some of the darker scenes? For example, how did you feel about this approach when Finty, Mr. Henderson, the Pearly King, and Barbara discuss what music they’d like played  at their funerals, and in their ongoing discussions about dying?

5. Do you feel that Queenie, as a female accountant, was ahead of her time? Why do you think Joyce gave her this specific profession? What do you think it says about her character?

6. Queenie laments, “If only memory were a library with everything stored where it should be. If only you could walk to the desk and say to the assistant, I’d like to return the painful memories.” Do you feel the same way? Would you return painful memories if you could?

7. Queenie’s mother once told her that “there is no such thing as love at first sight. People get together because the time is right.” Do you think this was true for Queenie? Or was it just the opposite when she met Harold? Queenie tells Harold, “I had no child and so I gave my love to you.” How do you feel her profound loss affected her relationship with Harold?

8. Queenie’s destiny is altered the day she accidentally meets Harold’s son, David. What do you think draws David to Queenie? Why does he steal her poems? Do you think it was an act of pure malice and betrayal? Why does he choose to steal her egg whisk, of all things? What, if anything, is he trying to say to her?

9. David says, “I’d rather die than be ordinary.” What do you think he means by that?

10. When David tells Queenie, “I just want someone to see me, Q. See who I really am,” were you surprised by what he had been hiding? Why? Do you think that, in the end, he was “seen” by those who loved him?

11. Queenie created her sea garden “to atone for the terrible wrong I had done to a man I loved.” She writes, “Sometimes you have to do something with your pain because otherwise it will swallow you.” Do you feel she shared any blame in David’s suicide? Do you think she should have carried this burden for twenty years?

12. Were you surprised when you learned the secret of Sister Mary Inconnue?

13. When Harold and Queenie finally meet at the end, Queenie says, “See me, Harold, I said. And you did. You looked and looked and you saw me.” Were you waiting and hoping for them to have this moment together? Did you feel fulfilled by it?

14. How did you feel when you learned that Harold would never actually read Queenie’s confession? Were you satisfied that Queenie found absolution and peace before she died?

15. What did you learn about each of these characters’ journeys that surprised you? Why do you think Joyce used “love song” in the title instead of “confession”?

Standing in the Rainbow

Astonish Me
Back to Top