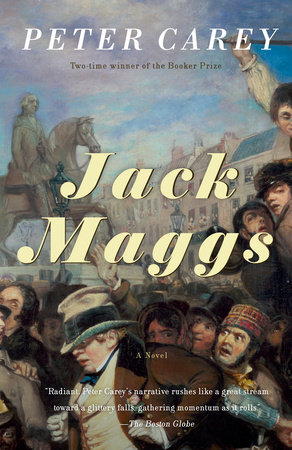 This guide is intended to enrich your experience reading Peter Carey’s Jack Maggs. This thrilling and original story, part historical novel and part literary fantasy, is one of the most exciting, erudite, and compulsively readable works of fiction to come along in recent years.

London, 1837. Jack Maggs, a foundling trained as a thief, betrayed and deported to a penal colony in Australia, has reversed his fortunes. Under threat of execution he returns to London after twenty years of exile to try to fulfill his well-concealed heart’s desire. Masquerading as a footman, Maggs places himself in the rather eccentric household of Percy Buckle, Esquire. But when the unlikely footman comes under the scrutiny of the brilliant and unscrupulous young novelist Tobias Oates, an enthusiastic dabbler in mesmerism, Maggs’s secrets are revealed and he is forced to take desperate, sometimes violent action. A powerful and unusual homage to Charles Dickens’s Great Expectations, Jack Maggs displays all of Peter Carey’s broad historical and artistic knowledge, his masterful command of character, and his powerful moral vision. It is an unforgettable novel which will continue to stir the reader’s imagination and emotions long after it has been read.

From the Booker Prize-winning author, a vivid and robust novel of Dickensian London–a place and a story teeming with mystery, science, and passion.

The time, the 1830s. Jack Maggs, a foundling trained in the fine arts of thievery, cruelly betrayed and deported to Australia, has now reversed his fortunes–and seeks to fulfill his well-concealed, innermost desire. Returning "home" under threat of execution, he inveigles his way into a household in Great Queen Street, where he’s quickly embroiled in various emotional entanglements–and where he falls under the hypnotic scrutiny of Tobias Oates, a celebrated young writer fascinated by the process of mesmerism and obsessed with the criminal mind.

From this volatile milieu emerges a handful of vividly drawn characters in the dangerous pursuit of love, whether romantic or familial–each of them with secrets, and secret longings, that could spell certain ruin. And as their various schemes converge, the captivating figure at the center is Jack Maggs himself, at once frightening, mystifying, and utterly compelling.

1. "I am an old dog…who has been treated bad, and has learned all sort of tricks he wishes he never had to know" (69), says Jack Maggs. Maggs is a strong man with certain weaknesses. What in his background might have caused the tendency toward romantic fantasy (about Phipps, for example) which is so much at odds with his general clear-sightedness? What makes him violent; what makes him kind and tender?

2. Tobias Oates is possessed of an "unholy thirst for love" (37). How does this thirst shape and rule his life? Does he turn it to a strength or a weakness? Is it this thirst for love that inspires his equally strong thirst for power? Looking at Maggs, Oates reflects that he himself "would be the archaeologist of this mystery; he would be the surgeon of this soul" (52). How is this hubris punished–or is it?

3. Percy Buckle has many admirable characteristics: early in the novel Mercy Larkin says that he is "the kindest, most decent man in all the world" (68). What turns him sour and fills him with hate? What weaknesses in his character allow this hatred to take over his soul?

4. There is much speculation by the characters in Jack Maggs about the "Criminal Mind." Oates thinks that Jack Maggs is an example of the criminal mind, but as the events unfold his ideas on the subject become less and less clear. Has Maggs been made a criminal by his nature, or by his environment? Is Oates, in your opinion, a criminal? What about Buckle, Phipps, Mary Britten, or Tom? Is there in fact any such thing as a criminal mind?

5. Who or what is the "Phantom" that haunts Jack Maggs’s dreams? When Maggs dreams that he kills the Phantom (105), what does this fantasy signify?

6. What effect has Sophina’s abortion and the loss of their baby had upon Jack throughout his life? Might this loss have inspired Jack’s original love for little Henry Phipps? Why do you think he persists in his love for Phipps at the expense of his own children back in Australia? Maggs says that he determined to "weave [Phipps] a nest so strong that no one would ever hurt his goodness" (245). Does Maggs’s story imply that such protection is finally impossible?

7. How would you describe Mary Oates: is she really merely "good" and "dull" (181) as her sister sees her? Just how astute is she about her husband? From the time of Lizzie’s fatal illness, Mary begins to hate her husband, and this hatred eventually "would penetrate the deepest reaches of her soul and make her into the slow and famously dim-witted creature who was commonly thought not to understand half of what her famous husband said" (292). This sentence implies that earlier, she was neither slow nor dim-witted. What do you think?

8. As a companion piece to Charles Dickens’s Great Expectations, with Oates as Dickens and Maggs as Dickens’s convict Magwitch, Jack Maggs can be seen as a reflection upon the creative process. Maggs sees Oates’s usurpation of his life and thoughts as theft: "You are a thief," he says; You have cheated me, Toby, as bad as I was ever cheated" (259-61). Is Maggs justified in believing this? If so, is such theft an inevitable part of the creative and transformative process?

9. Maggs is never a "gentleman;" Phipps is. What does this tell us about the class system in nineteenth-century England, and about the author’s attitude toward it? What changes were occurring in the class system at that time, and how are these changes illustrated by the novel and its characters? Tobias and Buckle look on Maggs as a servant, themselves as masters: how does Carey subvert this idea? Mercy says that although he had two children of his own, Maggs "had an aim to find a better class of son" (295). Are Maggs’s motives really as simple as this?

10. Two of the themes Jack Maggs returns to again and again are those of guilt and shame. For what crimes, real or imagined, do Oates and Maggs feel the most guilt and shame? What betrayals has each of them committed? Is their shame justified? Are there any characters in the novel who seem to be without guilt or sin?

11. Maggs tells Mercy that he was flogged by "a soldier of the King," to which she replies, "Then it were the King who lashed you" (295). What does Carey mean to imply about the social ills of England, and of the Australian penal colonies? How do Maggs’s dreams, in which his Phantom is dressed as a soldier–and the reality in which the miniature he possesses of Phipps, the soldier, turns out to be the portrait of the former King George IV–contribute to the novel’s political metaphor?

13. Oates envisions the end of Maggs’s story with Maggs being burned alive in his mansion. Which ending is more artistically appropriate: the one imagined by Oates, or the one Carey actually gives Maggs?

14. If you have read Dickens’s Great Expectations, how do the characters of Maggs and Phipps differ from those of Magwitch and Pip, and why has Carey introduced these differences? How do the character and life of Dickens himself differ from that of Oates? What elements of the plot of Jack Maggs could be called "Dickensian"? Does Carey create a particular style for this novel that directly resembles, or echoes, Dickens’s style? What are the implications of a contemporary Australian novelist harking back to nineteenth-century English traditions?

The Castle in the Forest

The Heat of the Day

All the Birds, Singing
Back to Top