My Life as a Fake Reader’s Guide 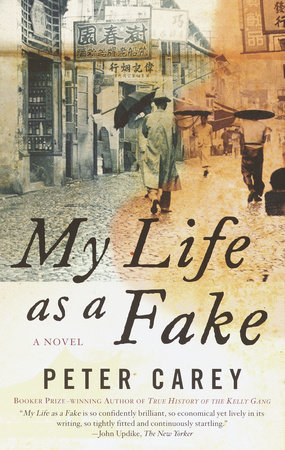 My Life as a Fake Reader’s Guide

print
My Life as a Fake Reader’s Guide

“My Life as a Fake is so confidently brilliant, so economical yet lively in its writing, so tightly fitted and continuously startling.” –John Updike, The New Yorker

The introduction, discussion questions, suggested reading list, and author biography that follow are designed to enhance your group’s reading of Peter Carey’s My Life as a Fake, a wonderfully conceived and cleverly executed novel about the relationship between art and artist, truth and fiction. Based on an infamous literary hoax in Australia in the 1940s, it is a telling and often hilarious look at how the act of creation holds surprises that fly in the face of rational thought and defy the expectations of creator, critic, and reader alike.

Bob McCorkle, an uneducated, working-class bard, takes the Australian literary world by storm. Published in a trendy literary journal, his poetry displays an artistry, fire, and erudition rarely encountered, and the fact, revealed by his sister, that McCorkle tragically died at the age of twenty-four only adds to the excitement surrounding the masterpieces. There’s only one complication: McCorkle’s entire oeuvre was created by one Christopher Chubb, a struggling poet intent on demonstrating the shallowness of modernist poetry. When the ruse leads to an obscenity trial that destroys the magazine and drives its editor to suicide, Chubb, overwhelmed by guilt, tries to disappear into the shadows. But his escape is foiled by an uncouth stranger claiming to be the flesh-and-blood incarnation of Bob McCorkle.

Decades later, Sarah Wode-Douglass, the editor of The Modern Review, is drawn into the bizarre puzzle when she travels from London to Malaysia and happens upon Chubb in a grubby bicycle repair shop. The years have taken their toll on the poet, but he holds fast to his obsession with exposing the creature who assumed the mantle of poetic genius and co-opted Chubb’s hard-earned rewards, both personal and professional. Lured by a glimpse of one of McCorkle’s extraordinary verses, Sarah agrees to record Chubb’s story in hopes of securing McCorkle’s unpublished treasures for her journal. Chubb tells a labyrinthine tale of casual cruelties and shocking crimes, of lives used up in the unceasing pursuit of vengeance and redemption. Sarah, who harbors myths of her own about the past and calculated deceptions about the present, gradually abandons her role as mere scribe and becomes a pivotal player in the drama unfolding around her.

A playful, potent twist on the gothic classic Frankenstein, Peter Carey’s novel revels in the interplay of reality and imagination that inspires not only great works of literature but the personae that writers, their editors, and their readers choose, wittingly and unwittingly, to construct.

1. My Life as a Fake opens with a satirical description of London’s literary elite, placing the fictional John Slater within the company of such real-life figures as Robert Lowell, Dylan Thomas, and the “Faber crowd,” which establishes Sarah’s literary credentials as the editor of The Modern Review. How does this portrait set the framework and tone for the rest of the novel?

2. Is Sarah’s fascination with John Slater based solely on her suspicions about the role he played in her parents’ lives? Why, despite her antipathy to travel, does she agree to accompany him to Malaysia? What are his motivations for asking her?

3. Is Slater’s account of the McCorkle hoax [pp. 19–21] designed to pique or discourage Sarah’s interest in the scandal? What particular details support your answer?

4. At the end of her first meeting with Chubb, Sarah says, “Chubb appeared monstrous—malicious, anti-Semitic, so grotesque and self-deceiving in his love of ‘truth and beauty’” [p. 33]. What insights does this harsh evaluation offer into Sarah’s decision to pursue the poet and the manuscript he briefly shares with her?

5. In describing the Australian character and culture, Slater says, “Remember, this is the country of the duck-billed platypus. When you are cut off from the rest of the world, things are bound to develop in interesting ways” [p. 19]. Chubb, however, chooses to see his homeland as a victim of the “Tyranny of Distance” [p. 29]. What do these views reveal about differences between an outside observer (Slater) and a native? Is Chubb’s viewpoint shaped by his lack of recognition? In what ways does it color his description of David Weiss [pp. 30–31], a Jew whose privileged childhood and early success Chubb openly resents? What impact does it have on his account of the obscenity trial [p. 56]?

6. McCorkle’s rant against the prosecution of Weiss and his vow to exact justice “not just for the sake of David Weiss but of art itself, and for a country where we seldom understand that we must be prepared to fight for issues bigger than an umpire’s decision at the Melbourne Cricket Ground” [pp. 77–78] is an escalation of Chubb’s criticisms of Australian society. Why has Carey put these words into the mouth of the “phantom poet”?

7. When McCorkle recites one of Chubb’s contrived parodies, Carey writes, “This lunatic had somehow recast it without altering a word. What had been clever had now become true, the song of the autodidact, the colonial, the damaged beast of the antipodes” [p. 82]. What does this imply about the nature of literature? About the relationship between a writer and his or her audience?

8. How does Carey use minor characters–from David Weiss, the rival Chubb hopes to expose, to Noussette (who, Chubb declares, would “try anything . . . could be who she wished” [p. 93]) to Mulaha, the master of poisons Chubb encounters in the jungle—to explore the role of deception in human lives? In what ways do these incidental figures help define the moral universe of the novel?

9. “I went to bed with the disconcerting knowledge that almost everything I had assumed about my life was incorrect, that I had been baptised in blood and raised on secrets and misconstructions which had, obviously, made me who I was” [p. 133], Sarah writes after learning the truth about her mother’s death and her father’s dual life. Why do Slater’s revelations free her to divulge the story of her own long-term love affair? Does the relationship reveal something about her character that was previously hidden? Does it make her more or less appealing?

10. McCorkle quotes Milton’s Paradise Lost when he demands that Chubb give him a birth certificate [p. 95]. What other quotations or literary references extend the scope and resonance of the story? What purpose do they serve in the overall scheme of the novel? For example, what do they suggest about Carey’s feelings about “serious” literature and its acolytes?

11. The creature’s hold over Chubb reaches a climax when he kidnaps Nousette’s baby and raises her as his own. How does Chubb’s unrelenting pursuit of the pair—as well as the creature’s ability to convince the little girl that Chubb is an evil spirit [p. 208]—mirror the creative process and the fears, hopes, and ambitions that drive an artist?

12. My Life as a Fake is narrated by Sarah, but the voices of Slater, Chubb, and McCorkle take over at various crucial points. What effect does this have on your reactions to the events? Whose point of view seems the most reliable and why?

13. On his deathbed McCorkle gives Chubb a manuscript with the “fierce sarcastic title, My Life as a Fake” [p. 256]. In what ways does the title sum up not only McCorkle’s life, but also the life stories of each of the other three major characters?

14. While the Ern Malley scandal is familiar to Australian readers and students of literary hoaxes, it is probably unknown to most American readers. In what ways might this affect the reader’s response to the novel? Does it stand entirely on its own, or would knowledge of the actual events enhance the reading experience? Why do you think Carey chose to explain the sources of the novel in an afterword rather than in an introduction or a prologue?

15. In Mary Shelley’s Frankenstein, the monster destroys Victor Frankenstein, the brilliant scientist who created him. One of the major themes of that novel is the danger of unfettered scientific inquiry and experimentation. Are there similarities between Chubb’s motivations and those of Dr. Frankenstein? In drawing on the theme and structure of Frankenstein for My Life as a Fake, what is Carey saying about the nature of genius? Are superior minds and talents exempt from the ethical guidelines of ordinary society?

16. Carey appropriated and reanimated the plot of Dickens’s Great Expectations in his previous novel, Jack Maggs, and his Booker Prize–winning True History of the Kelly Gang retells the story of one of Australia’s most famous real-life legends. In My Life as a Fake, Carey exploits both literary devices, imposing the framework of a classic work of fiction on an historical event. How does the juxtaposition illuminate Carey’s definition of “creativity” and the role of the fiction writer? To what extent does the history of literature represent an ongoing endeavor to conflate reality and make-believe to give the world an utterly original creation?

Peter Carey was awarded the Booker Prize in 2001 for True History of the Kelly Gang and also in 1988 for Oscar and Lucinda. His other works include Jack Maggs, The Unusual Life of Tristan Smith, The Tax Inspector, and Bliss. A native of Australia, he currently lives in New York City.

The Time of the Uprooted

Heaven Has No Favorites

Anatomy of a Soldier
Back to Top