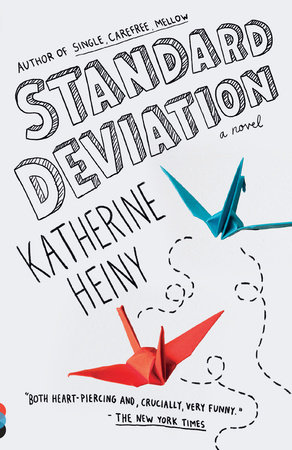 The questions, discussion topics, and reading list that follow are intended to enhance your reading group’s discussion of Standard Deviation, the debut novel from Katherine Heiny, acclaimed author of Single, Carefree, Mellow.

1. The epigraph for this novel, “Before you became my mistress I led a blameless life,” is from a short story by Laurie Colwin. What did you think the epigraph indicated, before you started Standard Deviation? And now that you’ve read it, why do you think Heiny chose it?

2. Audra and Elspeth are vastly different. What aspects of each led Graham to love them both? Who do you think was better suited to him?

3. How does origami figure into the story? What does it represent?

4. Why does Audra invite so many random people to stay in their home? Does Graham’s acceptance of these houseguests suggest he enjoys it?

5. On page 43, Heiny writes, “Graham’s and Audra’s were not the only universes. There were also other universes—hidden ones, secret ones. Little pocket universes scattered around and you slipped into them unexpectedly, like when you stopped into a bodega for milk and discovered a cardboard display stand of Sucrets or Love’s Baby Soft perfume or some other long-defunct product.” What other hidden universes does Graham encounter over the course of the novel?

6. What motivates Audra to socialize with Elspeth? Why does Graham go along with it?

7. On page 95, Graham has an epiphany: “It occurred to Graham that here, finally, was the similarity between the two women he’d chosen to marry: they were both totally unrufflable, one out of iciness, the other out of obliviousness.” In what ways does this strike you as an accurate assessment?

8. Why does Graham become so obsessed with Jasper?

9. What do we learn about Graham from his scenes with Olivia?

10. Graham comes very close to having adulterous sex with Elspeth. How do you imagine Audra would have responded if she’d known?

11. In addition to Graham’s relationship with Elspeth, other characters have adulterous liaisons: for example, Bitsy’s husband, and Clayton at the convention. What point is Heiny making?

12. In addition to the marriage-related themes in the novel, raising a child with special needs also figures in significantly. How might the story have changed if Matthew didn’t have Asperger’s?

13. On page 232, the title term appears in a discussion of Matthew’s diagnosis. What role does “standard deviation” play in the novel as a whole?

14. Heiny uses food—attitudes toward cooking, eating together, picky behavior—to outline character. What do we learn about Audra from her disinterest in cooking? What other characters have food-related traits?

15. Why does Graham feel so guilty about the All-Clad frying pan? Why does he elect to take a plain wooden cutting board instead?

16. What do we learn about Audra from her decades-long friendship with Lorelei?

17. Why does Audra’s plan for the fishing trip go so badly? What might have led to a different outcome?

18. If you had to use one adjective to describe the ending, what would you choose?

Learn More About Standard Deviation
print
Back to Top