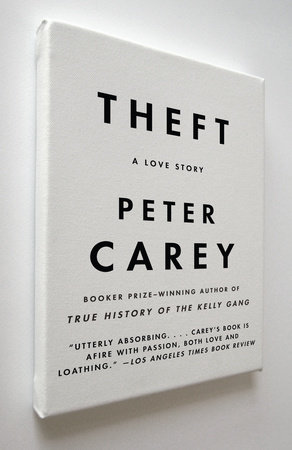 The introduction, discussion questions, and suggestions for further reading that follow are designed to enhance your group’s discussion of Theft, the brilliant new novel from two-time Booker Prize winner Peter Carey.

Michael “Butcher” Boones was once a famous as a painter in Australia could be. Now he is just a down-and-out “dogsbody” [p. 11] having suffered a humiliating divorce, a precipitous decline in his artistic reputation, and a stint in jail for attempting to steal back paintings in his ex-wife’s–“the plaintiff,” as he prefers to call her–possession. To make matters more complicated, Michael is saddled with his “slow” brother Hugh, a 6’ 3”, 220-lb mixture of unpredictable violence, poetic fancy, and childlike dependence. As the novel begins, Michael is serving as an unpaid caretaker in the borrowed cabin of his uptight art collector, Jean-Paul, outside a swampy Australian town. As Hugh says, in one of his characteristically deflating commentaries on Michael’s narcissism: “One minute you are a NATIONAL TREASURE with a house in Ryde and then you are a has-been buying Dulux with your brother’s DISABILITY PENSION. You are a CONVICTED CRIMINAL a servant living on a Tick and Thistle farm.”

Told through the alternating perspectives and vividly distinctive voices of Michael and Hugh, Theft plunges readers into the 1980s art world, with all its deceit, fraud, forgery, ambition, greed, and all-purpose sliminess. When the beautiful Marlene Leibovitz, daughter-in-law of the late Jacques Leibovitz, a great modernist painter, stumbles into Michael’s life, they fall in love and she vows to revive his moribund career. Marlene is in this backwater town ostensibly to authenticate a Leibovitz painting–Monsieur et Madame Tourenbois–owned, unbeknownst to Michael, by his farmer neighbor Dozy Boylan. Marlene has assumed the droit moral, and has the sole legal right to verify the real Leibovitzes from the fakes, of which there are more than a few in circulation. But when Dozy’s painting is mysteriously stolen, Michael comes under suspicion, as does Marlene. As they travel from Australia to Tokyo and New York, love and the raw ambition to storm the gates of the art world draws Michael deeper and deeper into what looks increasingly like Marlene’s criminal machinations. Is she using Michael for her own ends or does she love him and admire his art as much as he thinks she does? That uncertainty sustains the narrative tension of Theft right up to its final pages.

As vivid a portrait of the artistic temperament as has been produced in many years, Theft bristles with invention, its linguistic surface alive with the textures of two of the most distinctive voices in all of literature.

1. Why does Peter Carey use two narrators in Theft? How do Michael and his brother Hugh regard each other? Is one a more trustworthy narrator than the other? What effects does Carey achieve though this bifurcated perspective?

2. How do the two epigraphs that precede Theft illuminate the story? In what ways does Michael wish to be “a king” and to do just as he pleases “in all circumstances”? Is Hugh right in declaring that “My brother had been a King but now he was a Pig, eviscerated” [p. 265]?

3. The artist Milton Hesse tells Marlene that “the only secret in art is that there is no secret. Nor should she imagine that there is a hidden strategy. Forget about it. Real artists don’t have strategy” [p.138]. What conventional views of the artist does this assertion contradict? Might this way of thinking about art apply to novels as well? Is Theft itself free of a “hidden strategy”?

4. Hugh says of his brother: “The artist is always for himself alone, allegedly a MONK, a PRIEST or KING, in spite of which assertion he was always seeking a woman who would let him lie with his BUG IRISH face between her breasts” [p. 89]. Is this a fair assessment of Michael? To what degree does he fit the type of the narcissistic, needy, and self-inflated artist?

5. What does Theft suggest about the ambitions and motives of artists, dealers, collectors, critics, and curators? Does Theft present a cynical or merely realistic view of the art world?

6. Michael and Hugh have very distinctive narrative voices. What are the most striking qualities of those voices? How are they like and unlike each other? What pleasures do they offer that cannot be found in novels where the narrator is more distant and reserved?

7. In what ways does Marlene manipulate Michael in order to pull off her various crimes? Why does he allow himself to be manipulated?

8. Both Michael and Hugh address the reader directly, for example when Michael says “I will not bore you with the surgical operation needed to remove those threads” [p. 115]. Who is the presumed reader of this book? In what ways are Michael and Hugh trying to persuade the reader, and of what?

9. In what ways does Carey explore the themes of deception, dishonesty, fakery, and forgery in Theft?

10. How does Michel’s background, coming from a family of butchers from Bacchus Marsh, affect his relationship to his own painting and to the pretensions of the art world? How does his way of working, his attitude toward painting, his passion for paint and canvas, the materials of art, defy the conventional image of the artist?

11. Theft is subtitled “A Love Story.” What does the novel suggest about love–romantic love, self-love, brotherly love?

12. The novel ends with Michael’s questions: “Is she taunting me or missing me? How will I ever know? How do you know how much to pay if you don’t know what it’s worth?” [p. 269]. How should Michael’s final question be read? What is he referring to? What is Marlene’s likely motive for continuing to arrange shows for Michael’s work?

13. In an interview, Carey says that “to produce tensions which push the language into somewhere new, you’re stretching all the time for the thing that’s true and broken and strange. Like de Kooning and Rothko.” [QWeekend (Australia), April 1, 2006]. In what ways does Carey push the language in Theft to somewhere new? How is Theft similar to what Rothko and de Kooning attempted in their art?

Peter Carey is the author of nine novels, including the Booker Prize—winning Oscar and Lucinda and True History of the Kelly Gang. Born in Australia in 1943, he now lives in New York City.

A Thousand Cuts
Back to Top