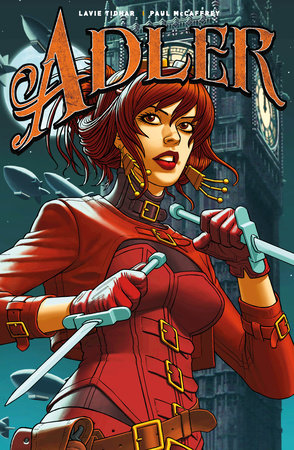 It’s the League of Extraordinary Gentlewomen, as Adler teams up with a host of famous female faces from science, history and literature to defeat the greatest criminal mastermind of all time!

“Women are never to be entirely trusted – not the best of them.” – Arthur Conan Doyle.

1902. Wounded in the Boer War, Jane Eyre returns to a London transmogrified by emerging modernity. An old friend, the glamorous inventor Lady Havisham, introduces her to the American adventuress Irene Adler, and the two seek lodging together. But Adler is engaged in a brutal secret war against a mortal enemy of the British Empire: Ayesha, She-Who-Must-Be-Obeyed, who seeks revenge against the colonisers who destroyed her country. And Jane,not unwilling, is swept up in the case.

As Queen Victoria holds on to her throne with the help of experimental new medicine, Adler and Ayesha both fight for the secret weapon developed by the scientist Madame Curie. And as Ayesha and her amazons (not to mention her pet assassin Carmilla) take over the London underworld, Adler must form a team of determined women to stop them – before the Empire is destroyed.
From World Fantasy Award winning author Lavie Tidhar (The Violent Century, Central Station) and artist Paul McCaffrey (Anno Dracula) comes a pulse-pounding, gorgeously-illustrated graphic novel of Victorian menace, excitement and humour in Tidhar’s inimitable style.

“Tidhar (By Force Alone) propels an ensemble of historical figures and literary characters through a knotty and thrilling plot packed with intrigue and visceral action, illustrated with a keen eye for historical detail by McCaffrey (Anno Dracula–1895: Seven Days in Mayhem).” - Library Journal Starred Review

“The story is clever and fast-paced, and its emphasis on women is refreshing and inspired … Adler is pure entertainment, establishing a strong, intelligent heroine and a foundation that leaves the door open for future (past) adventures.” – Foreword Reviews

“There’s something massive at work behind the mash-up hook of this story, and the more you read the deeper into that sense of scale you get. It’s an addictive feeling” – SyFy Wire

“Combines dynamic, manga-esque linework with an ornate, Bryan Talbot-style eye for detail, meticulously designing everything from an Art Nouveau concert poster to some authentic periodicals of the day” – SFX

“With complex artwork and a story that puts a unique spin on some of the 19th century’s greatest literary heroines, this is one adventure you’ll want to sign-on for” – Kabooooom

“From fans of the various literary properties to those who have only minimal information on any of them, “Adler” #1 is both educational and entertaining” – Multiversity Comics

“At its finest, Adler is a delightful, progressive penny dreadful that reminds readers of its Victorian inspirations” – Comic Watch

“A fun and unique story … filled with memorable characters and the plot delivers a pulp-style mystery perfectly … a truly memorable tale.” – But Why Tho

“The rapid pacing of the story leaves you breathless from enjoyment, the exited bombast of explosion, gunfire, and murder is deliciously overt and there’s a unique thrill to seeing more modern sensibilities overlaid on classic figures … Ridiculous and riveting, Adler is a (penny) dreadfully fabulous story” – SciFi Now

“A wonderful take on historical fiction. The fictional characters from various forms of literature and historical figures are breathtakingly brought to life in this greater-than-life journey” – The Fandom Post

“Tidhar and McCaffrey form a great team that keeps you interested and intrigued from the opening panels right up to the end. There’s nothing elementary about this one” – Forces of Geek

“Fun and exciting …  [a] fast-paced, thrilling adventure. I’d love to see more Adler graphic novels in the future, as there are endless possibilities with this fresh take on familiar literary characters.” – SciFi Chick

“Adler, in which the opera singer-turned-adventuress teams up with other fictional women — Lady Havisham! Jane Eyre! — as well as real historical figures — Marie Curie! Queen Victoria! — to protect the British Empire from an angry African queen and a vampiric assassin” – Book Riot