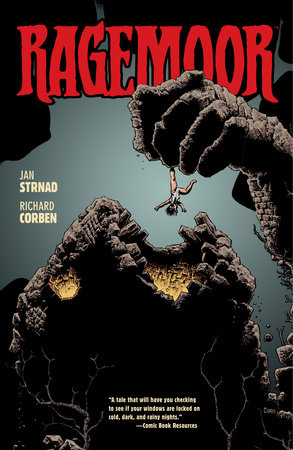 By Jan Strnad
Illustrated by Various

By Jan Strnad
Illustrated by Various

From the creators of Mutant World!

Ragemoor! A living castle, nurtured on pagan blood, harborer to deadly monsters! A fortress possessed of its own will and ability to change itself, with the power to add and destroy rooms and to grow without the help of any human hand. Its servants aren’t human, its origins are Lovecraftian, and its keeper must fend off the castle walls from the terrible race of worm men! Collects the four-issue miniseries.

“Richard Corben and Jan Strnad are like the Jack Kirby and Stan Lee of post-EC monster comics, responsible for classics like The Last Voyage of Sindbad and Mutant World. To see the two of them back together and a project like this is just exciting as hell.” &mdash;Mike Mignola

Jan Strnad is a professional storyteller who has published comic books, worked in television animation, and is now a novelist. He is the author of several Creepy Archives, Star Wars, and Ragemoor comic books. His novels include Risen: A Supernatural… More about Jan Strnad