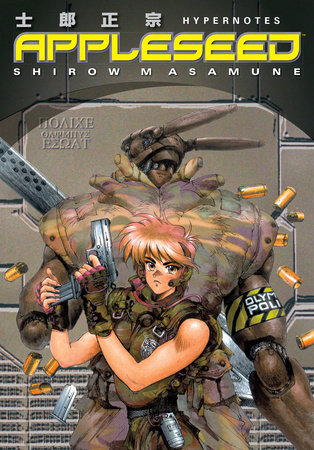 World War III is over, but for nomad soldier Deunan Knute and her cyborg lover, Briareos, the greatest challenge lies ahead. Not in the abandoned cities and DMZs of a post-war battlefield, but on the streets of a new “utopia.” Shirow Masamune’s visionary Appleseed is widely regarded not only as one of the lynchpin works of graphic fiction, but one of the most influential science-fiction stories in recent memory, culminating in the astonishing 2005 animated adaptation. Appleseed: Hypernotes, never before collected in America, features an over eighty page Appleseed tale, plus reams of detailed information and art of the characters, machines, and weapons of Appleseed.

Masamune Shirow is one of the most storied manga artists of all time. Shirow is known for Ghost in the Shell, Appleseed, Dominion, and many more. Much of Shirow’s work has been adapted into television, movies, and video games.