Your Fathers, Where Are They? And the Prophets, Do They Live Forever? Reader’s Guide 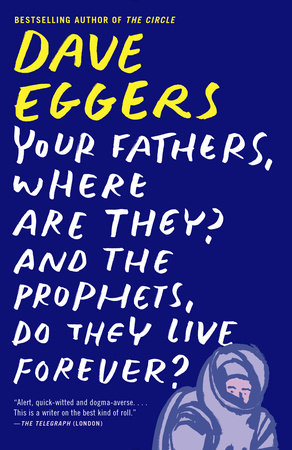 Your Fathers, Where Are They? And the Prophets, Do They Live Forever? Reader’s Guide

print
Your Fathers, Where Are They? And the Prophets, Do They Live Forever? Reader’s Guide

The questions, discussion topics, and other material that follow are intended to enhance your group’s conversation about Your Fathers, Where Are They? And the Prophets, Do They Live Forever?, Dave Eggers’s captivating new novel that follows a distraught young man who takes desperate measures to reconcile his frustration with our government and with his own life.

In a barracks on an abandoned military base, miles from the nearest road, Thomas watches as the man he has kidnapped wakes up. Kev, a NASA astronaut, doesn’t recognize his captor, though Thomas remembers him. Kev cries for help. He pulls at his chain. But the ocean is close by, and nobody can hear him over the waves and wind. Thomas apologizes. He ’didn’t want to have to resort to this. But they really needed to have a conversation, and Kev didn’t answer his messages. And now, if he can just stop yelling, Thomas has a few questions.

As Your Fathers, Where Are They? And the Prophets, Do They Live Forever? proceeds from this riveting opening, Dave Eggers poses fundamental questions about the value of national pride, religion, family, and self-worth. Formally daring, this blistering novel becomes a portrait of one man, unhinged, and our current position as a nation.

1. How does the all-dialogue structure enhance the disorientation one feels upon entering the novel? How is the book similar to and different from a traditional play?

2. Thomas compares his capture of Kev to the government’s clandestine capture of enemy combatants for interrogation (page 8). What does this tell you about Thomas’s attitude toward government policies? Do political beliefs drive any of his other kidnappings, or are there other factors at play?

3. Although Thomas exudes confidence in his scheme from the start, his perspective can easily be called “unreliable.” How does the dialogue structure highlight when he can and cannot be trusted? What is the effect of this characterization coming both directly—through Thomas’s words—and indirectly—through the words of others?

4. What are the values that Thomas admires most in himself and others? Are these consistent with his own behaviors, in the past, present, and what he imagines for his and others’ futures?

5. Compare how Thomas greets and explains the situation to each of his captives. What does his tone at the beginning of each new chapter foreshadow about their relationships and how history will unfold?

6. How would you describe the humor in the book and its effects on you, the reader, the characters, and plot? Does laughter enhance or alleviate the reader’s unease throughout?

7. What makes Marview, a place that Thomas describes as “forgotten . . . anything near it . . . toxic and dead (page 39),” an ideal setting for what occurs in the novel? Consider, too, what its name suggests about the kind of experience one might have there, and whether the novel fulfills that implication.

8. How does Thomas’s conversation with Mr. Hansen introduce the idea of a very wide spectrum of guilt and sympathy for individuals? Where does each of the characters in the book fall on this spectrum, and does this change at all over the course of the novel? Is the set of captives somehow representative of the different degrees that one might have sympathy for or ascribe guilt to someone else, or do they tend to extremes?

9. Does what happened to Thomas as a boy, as we learn through Mr. Hansen and his mother, justify or explain any of his actions and thoughts? Why or why not? What do the histories of Kev and Frank, the cop, do to complicate arguments of nature vs. nurture with respect to Thomas’s motives and sanity?

10. How do the captives attempt to challenge Thomas? Consider what strengths Kev, the congressman, and Sara employ when trying to lead him out toward the police waiting for him.

11. Why is Thomas so drawn to the congressman, in particular, and constantly seeking his approval? How does the congressman embody the religious, militaristic, and moral ideals Thomas claims to have?

12. Does Thomas’s personality reflect the mind-set of a zealot or extremist, and if so, how? What does he think his greater purpose is, as an individual and for the world/society?

13. Did you feel that Thomas’s plight became more personally, rather than politically, motivated at any point in the novel? If so, why and when? Consider the sequence of events after Frank’s capture, and what might be a fundamental common ground between, for example, the meaning of Don’s death for Thomas and his views on U.S. space exploration and foreign policy.

14. Do Thomas’s arguments about war, government spending, mental illness, and social welfare apply to events today? Did you ever find yourself agreeing with Thomas’s views, and how did you feel about that?

15. At the end of the novel, can you say definitively what Thomas really wanted from his captives, separately and together? What do his statements about motive—“I just want to get something I want” (page 205) and “Do you realize what a strange race of people we are? No one else expects to get their way like we do. Do you know the madness that this unleashes upon the world—that we expect to have our way every time we get some idea in our head?” (page 173)—suggest about his own sureness of why he’s doing what he’s doing?

16. What is it about Sara’s relationship to Thomas’s fantasy life, versus his real life, that allows him to be so open with her?

17. What do you make of Thomas’s understanding of a fulfilling life? In conjunction with the last line of the book, discuss his judgment of people who are “paragons of virtue and heroism but in the end . . . just want to stay alive [and] don’t want to be part of anything extraordinary” (page 208). Does the way the novel ends suggest whether he’ll be successful in finding fulfillment?

18. What do you think is the meaning of the title of the book? How are these two questions raised throughout even as they’re never actually spoken? Are they answered, and if so how?

19. In what ways does dialogue stand in for narrative descriptions of setting and physical descriptions of the characters? What could you most easily visualize in your head, and what was more difficult?

20. In other books, Eggers has assumed the voice of a variety of characters real and fictional—from his friend Valentino Achak Deng, a refugee from the Sudanese Civil War in What Is the What to the adventurous boy Max in The Wild Things. How does this novel similarly explore, and expand upon, the range of voices and psychological traits from which Eggers can tell a story?

Dave Eggers is the author of nine books, including most recently The Circle and A Hologram for the King, which was a finalist for the 2012 National Book Award. He is the founder of McSweeney’s, an independent publishing company based in San Francisco that produces books, a quarterly journal of new writing (McSweeney’s Quarterly Concern), and a monthly magazine (The Believer). McSweeney’s also publishes Voice of Witness, a nonprofit book series that uses oral history to illuminate human rights crises around the world. Eggers is the cofounder of 826 National, a network of eight tutoring centers around the country, and ScholarMatch, a nonprofit organization designed to connect students with resources, schools, and donors to make college possible. He lives in Northern California with his family.
Learn More About Your Fathers, Where Are They? And the Prophets, Do They Live Forever?
print

The Fifty Year Sword
Back to Top