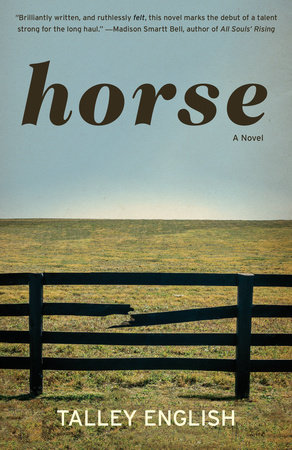 The discussion questions and suggested reading that follow are designed to enhance your group’s discussion of Horse, a novel by Talley English.

1. From the first section of the novel Found, what do we know about the French family? What is their life like? Do they seem close?

2. What might we be able to understand about Teagan’s personality based on her interactions with animals?

3. What does it say about Teagan that she is more interested in adult barn cats than she is in newborn kittens?

4. How do the various responses to Robert’s new BMW differ among members of the French family? How would you describe the overall feeling of the situation?

5. What does Teagan’s acceptance to the Hunting Hill School mean for her? What impact might it have on Susanna and Charlie?

6. Reflect on and discuss the similarities and differences between Teagan and her new friends at Hunting Hill. Do they seem to get along? Why or why not?

7. How might you describe Robert and Teagan’s relationship at the time when Robert picks Teagan up for lunch? How do they interact with each another?

8. Midway through Horse, how do Teagan and Ian respond to each another? How does this differ from their early interactions? Why would they behave this way, in your view?

10. Why does Teagan not seem to thrive at Hunting Hill? How would you characterize her friendships there?

11. How do Teagan and Charlie differ in their interactions with Robert? Do you find one approach more relatable than the other?

12. Note any key similarities and differences between the French family and the Garrett family. Would you describe one as happier than the other?

13. Reflect on Teagan’s reaction to Ian’s death. Would you say that Teagan’s response is more internal or external? Discuss the various ways that people respond to grief.

14. Would you say that Robert’s death comes as a surprise? How does Teagan react to the news? Does this response align with our understanding of Teagan as a character? How does this situation compare with the death of Ian?

15. Describe the scenes that are presented to us in the epilogues. What might the future hold for Teagan? How has she developed over the course of the novel?

The Lullaby of Polish Girls
Back to Top