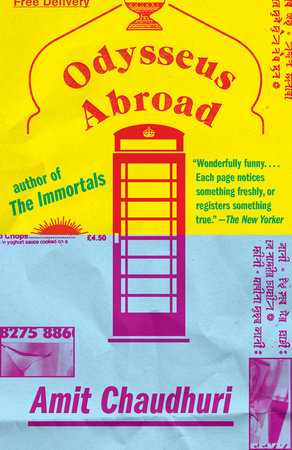 The questions, discussion topics, and reading list that follow are intended to enhance your reading group’s discussion of Odysseus Abroad, Amit Chaudhuri’s captivating and elegantly crafted novel about two Indian men living in London—a daydreaming college student and his eccentric bachelor uncle—and how they cope with feelings of isolation and alienation in their daily life.

From the author of the critically acclaimed novel Freedom Song comes Odysseus Abroad, a vibrant exploration of isolation and loneliness in a foreign land. Set in 1985, the novel follows a day in the life of Ananda Sen, a withdrawn twenty-two-year-old who emigrated from India to London in order to attend university. Homesick for India and isolated from his peers, Ananda finds solace in the works of romantic poets, hoping one day to achieve literary notoriety himself. As he dreams of a more charmed life, his day-to-day is mundane: brief meetings with his professors, awkward interactions with his raucous neighbors, and long walks with his uncle Radhesh, a genteel eccentric. During these sojourns around London, Ananda and Radhesh banter, sharing insights and trading barbs, ultimately revealing that while the two men are very different, there is something shared in their loneliness. With keen insight into the motivations and desires that drive behavior, Odysseus Abroad is a perceptive and wistfully funny examination of selfhood, and the predictabilities and eccentricities that compose our daily existence.

1. Discuss the concept of “exile” in Odysseus Abroad as related to Homer’s The Odyssey and James Joyce’s Ulysses. What parallels can you draw among the works? Are there any similarities among the protagonists and their attitudes towards isolation?

2. Discuss the Jorge Luis Borges epigraph that opens the novel. How does this quote relate to the content of Odysseus Abroad? How does the “right to…tradition” factor into Ananda’s experiences as an outsider in London

3. At several points in the novel, Ananda discusses his family’s trip to London in 1973. How did his experiences during this trip shape his understanding of the city? What, if anything, about the city has changed since his earlier excursions?

4. On page 9, Ananda reflects on his experience in London in comparison to Bombay, thinking, “But we were colonised by them…How is it that our cities are so different? How come I’m so little prepared for here?” How does this attitude reverberate throughout the novel? What aspects of his former life emerge in his London life? What comforts of home is he afforded, if any?

5. Discuss the contentious relationship between Radhesh and Ananda’s mother. What are the roots of their conflict? How does Ananda contend with his uncle’s behavior and attitude towards his mother throughout the novel? Do you think he has a clear picture of their relationship prior to his birth?

6. On page 23, Radhesh is described as a “world-conqueror,” but with a bit of a wink to the reader. Discuss Radhesh’s self-aggrandizing personality. How does Ananda deal with his uncle’s boastfulness throughout the novel?

7. How would you characterize Ananda’s mother? Page 19 states that Ananda doesn’t “know what he’d do without” her. Discuss Ananda’s relationship with her, and how she aided him while she was in London. Does his dependency on her stunt his own growth?

8. Discuss Ananda’s attitude towards the British. How does he perceive them? What aspects of their culture is he most surprised by?

9. Wealth, or the relative lack of it, is a theme throughout Odysseus Abroad. How does Ananda get by as a thrifty college student? How does his uncle’s wealth come into play throughout the novel? How does Ananda’s understanding of wealth—and class—change when he moves to London?

10. In chapter 2, Ananda’s schooling is discussed at length. How would you describe Ananda as a student? How is his identity shaped through his literary interests? Contrast his lack of interest in schooling with his ambitions. Given his conversation with Nestor Davidson about his poetry, do you think Ananda has realistic hopes for his future?

11. On page 83, Ananda describes how the “stubborn conflicts—between Indian and Chinese, Pakistani and Indian—melted and became irrelevant” in the cultural atmosphere of London. How does life in London cause Ananda to have a heightened awareness of his racial identity? How is his “otherness” explored throughout the book?

13. On page 113, Ananda’s mother says that “man’s made in his maternal uncle’s mould.” How is Ananda similar to Radhesh? Does Ananda acknowledge these similarities?

14. Despite Ananda’s sometimes gloomy mood, Chaudhuri infuses a wry sensibility into Odysseus Abroad. What scenes did you find to be the most humorous? How does Radhesh provide comic relief?

15. The narrative of Odysseus Abroad takes place over the course of a single day, yet the reader gets a rich sense of characterization and history through Ananda’s lengthy ruminations. What does the structure and narration of the book assert about “the capriciousness of memory,” as the Dan Jacobson epigraph mentions? Can you compare the structure and narrative progression of this book to that ofThe Odyssey? Other literary works?

16. Discuss the concept of the “journey” as a literary trope. How is Odysseus Abroad a play on this concept? Does Ananda’s journey through London provide him with any new insight into his life? Into his relationship with his uncle?

17. Discuss how a sense of place works in the novel. How is “place” expressed not only through the setting, but also through the characters’ physicality, as well as through the book’s style and language?

Amit Chaudhuri is the author of five previous novels, one work of nonfiction, and a number of books of literary criticism. His many honors include the Los Angeles Times Book Prize for Fiction and the Commonwealth Writers’ Prize; most recently, he became the first recipient of the Infosys Prize for Humanities—Literary Studies. A contributor to the London Review of Books, Granta, and The Times Literary Supplement, he is currently professor of contemporary literature at the University of East Anglia and a fellow of the Royal Society of Literature. He is also an internationally acclaimed musician, and lives in Calcutta, India, and Norwich, England.

The Ecliptic
Back to Top