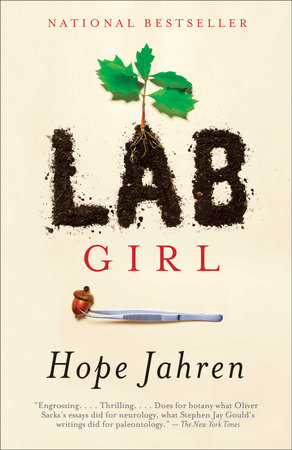 The questions, topics for discussion, and suggestions for further reading that follow are designed to enhance your group’s discussion of Lab Girl, a beautifully crafted blend of memoir and science writing wherein Hope Jahren, a renowned research scientist, moves with ease between the wonders and rigors of scientific investigation and the demands and joys that have shaped her personal life.

Growing up in rural Minnesota, Jahren spent her happiest hours with her father, who taught physics and earth science at a local community college and gave his daughter free rein in his laboratory after hours. In Lab Girl, Jahren traces her path from an early infatuation with the natural world to her hard-earned triumphs as a scientist recognized for breakthrough contributions to her field.  She braids together stories of her emotional and professional challenges, of the bond with her odd and brilliant lab partner who helped her persevere, and descriptions of plant life that, at once lyrical and precise, reveal the unseen processes driving the natural world. Through these different perspectives, she draws unexpected connections between plants and the people whose lives depend on them that will make you see both realms in a new light.

1. Lab Girl opens with a detailed description of the laboratory Jahren loved as a child. How does she transform a cinder-block room stocked with scientific equipment into a “castle” (p. 8)?  In what ways do her recollections of her time in the lab and the trips home late at night with her father evoke the mood and magic of fairy tales?

2. Jahren writes of the emotional distances between members of a Scandinavian family, of “growing up in a culture where you can never ask anyone anything about themselves” (p.11). Are Jahren’s feelings about her family shaped solely by cultural tradition?

3. Does Jahren’s observation that “being mother and daughter has always felt like an experiment that we just can’t get right” (p. 16) capture something you have experienced, either as a parent or child? Why do you think Jahren dedicated Lab Girl to her mother?

4. Jahren writes, “I chose science because science gave me what I needed—a home as defined in the most literal sense: a safe place to be” (p. 18).  Discuss and evaluate the combination of elements that determine her choice, including her attachment to her father and the recognition that “being a scientist wasn’t his job, it was his identity,” the acceptance by her science professors of “the very attributes that rendered me a nuisance to all of my previous teachers,” and her simple declaration that the desire to become a scientist “was founded upon a deep instinct and nothing more.”  Compare this initial explanation with the self-portrait she offers in the final chapter (p. 277).
[eallen1]Per text of book.

5. In alternating chapters, Jahren forges links between her own life and the plants that have populated it. How does the story of the blue spruce tree (pp. 27–29) set a pattern that is echoed and enhanced throughout the book? What insights do these close examinations of a large variety of plants provide into the needs and the capabilities shared by all living things? Is there a particular topic—for instance, the universal struggle for survival or the interdependence evident in nature—that resonates with you?

6. In recalling her first scientific breakthrough, Jahren writes, “On some deep level, the realization that I could do good science was accompanied by the knowledge that I had formally and terminally missed my chance to become like any of the women that I had ever known” (p. 71).  What are the emotional and practical repercussions of this moment?  Is there a moment in most people’s lives that marks a line between who they are and who they might have been?

7. Jahren describes her struggles with mental illness in a gripping and vivid interlude (pp. 144–47).  Why do you think she introduces this at the midpoint of her book?

8. Jahren’s relationship with Bill is a sustained theme in Lab Girl.  In what ways do Bill’s manner and methods in the lab complement Jahren’s?  What qualities shape their behavior toward each other on a personal level? Discuss the sense of intimacy and tolerance at the core of their friendship, as well as the boundaries they establish.  What do their long conversations, their reactions to institutional rules, and the misadventures they share on their field trips all add to the book?  In what ways does their trip to the Arctic capture the essence of their bond (pp. 195–201)?

9. What previously hidden aspects of Jahren’s character come to light as she describes her meeting and marriage to Clint (pp. 205–209)?

10. Jahren writes of her pregnancy, “I know that I am supposed to be happy and excited. . . . I am supposed to celebrate the ripening fruit of love and luxuriate in the fullness of my womb. But I don’t do any of this” (p. 217).  How do such factors as her childhood, her professional ambitions, and her mental illness affect her experience? Why does she “decide that I will not be this child’s mother. Instead, I will be his father” (p. 228).

11. What obstacles does Jahren face in her career as a research scientist?  Are some of the setbacks Jahren faces attributable to her being a woman in a male-dominated field?

13. Science writing is sometimes criticized for seeming to anthropomorphize scientific subjects. Do you think that Jahren avoids this potential pitfall? In what ways do her choice of words and use of metaphor balance the scientific facts that she wants to convey with having the reader understand and even delight in these facts? What facts did you find most interesting?

14. As you read Lab Girl, were you equally engaged with the autobiographical sections and the chapters on plants and trees, or did you find yourself more drawn to one or the other?

15. Lab Girl makes use of a wide range of language and tones, from the scientific to the colloquial, from biblical references to profanity. Does this range subvert our expectations about how scientists “should” talk? What do the different tones reveal about Hope? How does her varied language help us to see her in multiple lights—as scientist and writer, as friend and human?

16. Memoir is a highly intimate form. Do you feel you’ve gotten to know Hope through Lab Girl? Does she seem similar or different to science teachers you have had? Do you see her as an inspiration for young women who want to pursue a career in science?

Hope Jahren is an award-winning scientist who has been pursuing independent research in paleobiology since 1996, when she completed her Ph.D. at the University of California, Berkeley and began teaching and researching, first at the Georgia Institute of Technology and then at Johns Hopkins University. She is the recipient of three Fulbright Awards and is one of four scientists, and the only woman, to have been awarded both of the Young Investigator Medals given in the earth sciences. She was a tenured professor at the University of Hawaiʻi in Honolulu from 2008 to 2016, where she built the Isotope Geobiology Laboratories, with support from the National Science Foundation, the U.S. Department of Energy, and the National Institutes of Health. She currently holds the J. Tuzo Wilson Professorship at the University of Oslo, Norway.

Everything in Its Place

A Place of My Own

She Has Her Mother’s Laugh

A Field Guide to Getting Lost
Back to Top