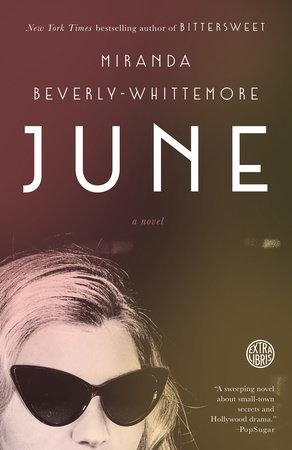 Do you have a book group? I’d love to speak with them about these and other ideas central to June, in person or via Skype; check out MirandaBW.com for details. As for the reader’s guide below, in order to provide you with the most thought-provoking questions possible, I found it necessary to reveal some of the plot’s secrets. If you haven’t finished reading June, I hope you’ll resist peeking at this guide! You can also access a fully designed book club kit, complete with recipes and bonus content, here: www.readitforward.com/essay/article/book-club-kit-june-miranda-beverly-whittemore/
Thanks for reading!
Miranda Beverly-Whittemore

1. In what ways is Lindie’s love for June the driving force in both of June’s storylines (1955 and 2015)? Do you think June loved Lindie in return?

2. Two Oaks is its own dynamic character in this book; have you ever lived or visited somewhere that felt “alive” in this way?

3. In what ways does Lindie buck convention, and how do the other characters respond to her moments of bravery and daring?

4. In 1955, when June and Jack met, he was a world-class movie star in his thirties, and she was an eighteen-year-old from a conservative small town; can a relationship succeed with that kind of power dynamic in play? Do you think Jack and June were truly in love?

5. Was Diane a sympathetic character? Why did she cling so tightly to Jack? Do you believe Jack loved her? Why did he agreed to marry her?

6. Did June do the right thing by taking Diane’s deal (chapter sixty)? Was this a sacrifice of love?

7. In your opinion, did Clyde deserve to die? Why or why not?

8. What were the consequences—both positive and negative—of Apatha and Lemon keeping their marriage a secret? How do you imagine the revelation of their status changed Eben and Lindie’s relationship to Apatha once they moved to Chicago and she moved to Louisiana (see chapter sixty-seven)?

9. Why did June stay with Artie even after Diane died, when she might have gone back to Jack without any repercussions for Lindie? Did June love Artie, as Lindie claims she did? Once June reconnected with Jack in their old age, why did she go to such great lengths to keep that love affair hidden, even from Cassie?

10. Let’s talk about bloodlines. In what ways does Tate resemble Diane, Elda resemble Jack, and Cassie resemble June? In what ways are these descendants different from their forbears, for better or worse?

11. How has the experience of being a movie star changed from 1955 to today? What are the consequences of celebrity? Would you want to be one?

12. Did Jack do the right thing by leaving everything to Cassie (and cutting Tate and Elda out of his will)? Why do you think he did so?

13. Will Nick and Cassie make their relationship work? Was Cassie right to forgive him for doubting her multiple times?

14. How will Cassie and Tate’s relationship develop beyond the confines of the book? Is it possible to cement familial ties even with those whose bloodline you do not share? Do you think Tate and Elda will be able to be “sisters” again?

Learn More About June
print
Back to Top