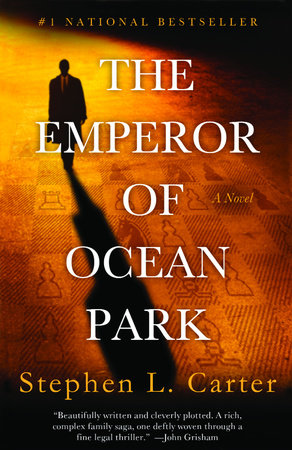 When the brilliant and controversial black judge, Oliver Garland, is found dead in his study, not everyone believes it was a heart attack. Mystery, secrecy, and misfortune seemed to surround the judge during his life—his daughter was killed in a hit-and-run car accident and his nomination to the Supreme Court was rejected in a scandalous public hearing—and now that’s he’s dead the mysteries only deepen. He has left his son Talcott, professor of law at a prestigious New England university, a set of cryptic instructions regarding his “arrangements.” Mean-while, Talcott’s sister Mariah is certain that their father was murdered and produces one conspiracy theory after another to prove it; his wife, the beautiful, ambitious Kimmer, is up for her own Appeals Court nomination and wants Judge Garland and all his undying controversy to go away; and Jack Ziegler, the menacing underworld figure whose friendship cost the Judge a position on the highest court, demands that Talcott deliver the “arrangements” to him. Caught between a marriage that is unraveling, a university from which he feels increasingly alienated, and a family history from which it seems he cannot escape, Talcott begins the long—and quite dangerous—task of unraveling his father’s sins and secrets.

Yet, The Emperor of Ocean Park is more than a thriller, suspenseful as it undoubtedly is. Carter skillfully weaves into his story an incisive critique of American culture, the complex interactions between law, religion, politics, wealth, race, and family in contemporary society. The result is a sprawling, smart, fast-paced novel that probes not just the mystery surrounding a father’s death but also the larger puzzle of how to live a meaningful life at this particular moment in our history.

1. How does The Emperor of Ocean Park differ from more conventional mysteries? In what ways is the narrator, Talcott Garland, unlike his counterparts—men like Philip Marlow, Sam Spade, and their descendants—in the prototypical mystery?

2. How does Carter build and sustain suspense throughout the novel? What are the several mysteries Talcott is trying to solve? What discoveries does he make—about his father, his wife, his brother, Jack Ziegler, Justice Wainwright, and others—over the course of the novel? What effect do these discoveries have on him?

3. The issue of race is a recurrent theme in The Emperor of Ocean Park. What is Talcott’s attitude toward race? In what instances is he subject to racial stereotyping? What observations does he make about the white liberal racism he encounters on campus? What racial hypocrisies does he see in his fellow blacks?

4. At the Judge’s funeral, Aunt Alma cryptically tells Talcott that he has “the chance to make everything right. . . . You can fix it. . . . But your daddy will let you know what to do when the time comes” [p. 24]. Like Hamlet, Talcott is charged by his father, beyond the grave, to set things right. In what other ways is Talcott a Hamlet-like character? In what ways must he both fulfill and transcend his father’s demands?

5. What makes Jack Ziegler such a frightening character? In what ways is he more than a mere villain? In what sense is he, as Talcott says, the “author” of the Garland family’s misery?

6. Talcott’s cousin Sally tells him: “You think you’re so different from Uncle Oliver, but you’re just like him. In some good ways, sure, but in some of the worst ways, too. You look down your nose at people you think are your moral inferiors. People like your brother. People like me” [p. 270]. Is she right? In what other ways is Talcott like his father? How is he different from him?

7. What role do the chess problems play in the novel? How do they lead Talcott to uncover his father’s “arrangements”? How are they related to issues of race and power? In what sense is Talcott himself a pawn?

8. When a man calls his house asking for his wife, Talcott thinks: “Odd the way the immediate concerns about a dying marriage can knock worries about torture and murder and mysterious chess pieces right out of the box, but priorities are funny that way” [p. 453]. In what ways is the story of Talcott and Kimmer’s failing marriage—and the larger story of the complex relations in the Garland family—more important than the murder mystery? How are his marital problems related to the mystery he is trying to solve?

9. The Emperor of Ocean Park describes a social milieu rarely seen in American fiction: the black middle class. What does the novel tell us about the highly successful people who make up this class? How are they different from African Americans more commonly encountered in modern and contemporary fiction?

10. Late in the novel, “a wave of fatalism” sweeps over Talcott and he wonders “whether I could have done anything differently, or if, once the Judge died, setting his awful plan in motion, and Jack Ziegler showed up demanding to know the arrangements, everything else was fixed. Whether my marriage, even, was doomed from the day of the funeral” [p. 533]. Is the story fated to end as it does or could Talcott have changed its outcome? What might he have done differently?

11. The Emperor of Ocean Park is not merely a thriller, but also an extended critique of American culture, commenting on issues of family, religion, law, education, race, marriage, wealth, and politics. What do the frequent philosophical digressions add to the novel? What beliefs and values does Talcott Garland try to live by?

13. How do Talcott’s relationships with his family—with his father, his sister, his brother, his wife, and his son—change over the course of the novel?

14. When Talcott retells the story of how he and his future wife had gotten out of the Burial Ground by crawling through a drainage tunnel, he writes: “Some metaphors need no interpretation” [p. 515]. Is the meaning of this metaphor obvious? How should the escape from the cemetery be interpreted? How is the Burial Ground itself important to the novel’s plot?

15. As the Judge’s secret life is revealed, Dana Worth, a woman who had always admired Oliver Garland, tells Talcott: “I don’t want to say he was evil . . . but he wasn’t just deluded, either” [p. 615]. How should the Judge finally be judged? What drove him to do what he did? Are his actions understandable? Forgivable?

16. When he delivers the eulogy at Theo Mountain’s funeral, Talcott breaks down weeping. “I suppose people think I was crying over Theo. Maybe I was, a little. But, mainly, I was crying over all the good things that will never be again, and the way the Lord, when you least expect it, forces you to grow up” [p. 620]. What are the “good things” Talcott mourns the loss of here? In what ways has the Lord forced him to “grow up”? How have the events of the novel changed him?

Stephen L. Carter is the William Nelson Cromwell Professor of Law at Yale University, where he has taught since 1982. He is the author of seven acclaimed nonfiction books, including The Culture of Disbelief and Civility. He lives with his wife and children near New Haven, Connecticut.