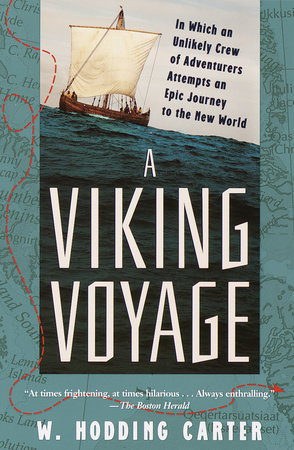 About A Viking Voyage

Fascinated since childhood with Leif Eriksson’s triumphant sailing voyage a thousand years ago from Greenland to North America, Hodding Carter could not shake his admittedly crazy idea of reenacting Eriksson’s epic journey in a precise replica of the precarious Viking cargo ship known as a knarr. This extraordinary book is the account of how he pulled it off. By turns thrilling and slapstick, sublime and outrageous, A Viking Voyage is an unforgettable adventure story that will take you to the heart of some of the most magnificent, unspoiled territory on earth, and even deeper, to the heart of a journey like no other. A celebration of the people and places Carter visits and a treasure-trove of fascinating Viking lore, here is an unforgettable story of friendship and teamwork–and the thrill of accomplishing a goal that once seemed impossible.

“[A Viking Voyage] is about a crew of strangers who become best friends, and a man whose fantasies take them on one of the most hilariously strange adventures of their lives.”
–Esquire

“AN EXCITING ADVENTURE AT SEA . . . [THAT] READS LIKE A HUNTER THOMPSON NOVEL . . . A Viking Voyage is about more than boat construction and male bonding. It’s also about self-doubt, isolation, personal relationships, and growth.”
–The Roanoke Times