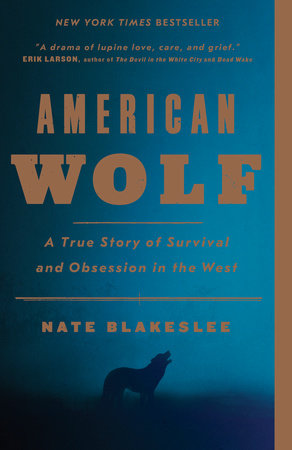 1. According to the author, why was wolf reintroduction called “the greatest wildlife conservation success story of the last fifty years”? Who were some of its opponents, and do you agree with their points of view? Why or why not? What larger cultural clash is revealed through the retelling of this “success story,” and what does each side feel they are fighting for? Has this clash ultimately been resolved?

2. Rick McIntyre considers the Druids to be the “face of the reintroduction” and “American royalty” akin to the Kennedys. What is it about this pack that makes them stand out? What ultimately becomes of this pack, and what does their story reveal about the lives of wolves and the fate of wolf families? What larger story is Blakeslee able to tell through the lives of these particular wolves?

3. Who is O-Six, and why do so many people seem to be especially interested in her? What distinguishes her from the other wolves, and why do you think she becomes so famous? How is she regarded by her own pack and by her peers? What evidence do we have for this? How do we, as readers, become invested in O-Six’s story? What makes her such a compelling figure on the page?

4. What does the book reveal about the role of politics in the delisting or relisting of wolves on the endangered species list? Is the listing or delisting ultimately determined by science or by politics? How, for example, did the question of whether wolves should be protected or hunted impact a crucial senate race in recent history? What does the author suggest is the larger, “real struggle,” and how does the Sagebrush Rebellion illuminate this? What are some of the implied dangers of politicians making these conservation decisions?

5. Although American Wolf is a work of nonfiction, the book possesses many qualities of a novel, including the treatment of the wolves as “characters” with their own individual narratives. How does the author create this sense of animal as protagonist? How do you think this rendering affects the way readers respond to the wolves’ stories and the controversial issues contained therein, and how did this characterization affect your own personal response?

6. In contrast, the book reveals that many biologists feel it is “a cardinal sin” to anthropomorphize wolves and other animals. Why? Do you agree with them? What would be some of the dangers inherent in assigning human qualities to animals as we study them and seek to understand them?

7. What does the book reveal about survival—both for the animals of Yellowstone and for the ranchers, guides, hunters, and other people who have made their lives in the West? Does the book reveal any traits or skills that are necessary to survive? What threatens survival for both animals and humans in Yellowstone, and how can these threats be overcome? Are we more sympathetic to another’s actions if they are taken in self-defense? In other words, does survival play a role in what we consider ethical?

8. Evaluate the motif of conflict. What are some of the main sources of conflict in this book? How did you respond to the various animal conflicts versus the human conflicts? Who did you find yourself siding with and why? Did your stance ever change as the story progressed? How does your stance illuminate the ways we respond to conflict and how we choose to offer empathy or support?

9. What is a “trophic cascade,” and what impact, if any, did wolves have on their surrounding environment in Yellowstone while they were protected? According to Blakeslee, what role did these facts play in determining whether wolves should be hunted or protected?

10. What does Rick McIntyre observe about the wolf 21 that is considered unusual in the animal world? What does Rick think is the single most important trait for an “alpha” to have, and why does he consider it an “evolutionary imperative”? Do you agree that each of the alphas represented in the book possess this quality? How important is it that human leaders possess this quality as well? Would you say it is also a natural imperative?

12. Who do you think “the killers” is referencing in the title of Chapter 4? Consider how the book creates a dialogue around those who kill and those who are killed. With whom do you sympathize? How, if at all, does the book distinguish between killing out of necessity and instinct and killing by choice? How would you characterize the author’s overall treatment of the subject of death?

14. The book draws attention to the abundance of cultural myths surrounding wolves. What are some of the popular stories and myths about wolves with which you are familiar? How are wolves depicted in these stories? Are they cast in a positive or negative light? Is this still how wolves are perceived today, or would you say that our views of wolves have evolved over time?

15. Why do you think the author chose to bookend his story with Steven Turnbull? Were you surprised by Turnbull’s action at the end of the story? Does he seem to feel any remorse for what he did? Why or why not? How do others react to what he has done? When the author spends time with Turnbull, how does it affect his view of Turnbull and what Turnbull has done? Would you say that Turnbull is a figure who elicits sympathy? Why or why not? How did you feel after reading the Epilogue? Did any of your own views change after reading about the meeting of Turnbull and the author?

16. What was Rick McIntyre’s dream? Would you say that he achieved it? What impact did Rick’s work have upon the Yellowstone community—and on communities beyond Yellowstone? What story does Rick tell at the gathering to celebrate his career, and what does he feel this story is about? Why does he consider the story a romance? What question does he feel this story should invite about wolves, and what does Rick believe is the answer to this question?

17. American Wolf incorporates many characters and many different points of view that are often in conflict with one another. Would you say that Blakeslee was neutral in his telling of these stories, or do you feel that he was more loyal to one point of view in particular?

18. What does Blakeslee’s book reveal about the art of storytelling? What makes a good story and where do we find evidence of this in the tales of O-Six and other inhabitants of the American West? Although many of the main characters of American Wolf are animals, what common themes, plots, and devices from the world of literature do we find in the stories found in Blakeslee’s book? What does the author say is ultimately “as good a reason as any” for telling a story?

The Lost City of Z

The Invention of Nature
Back to Top