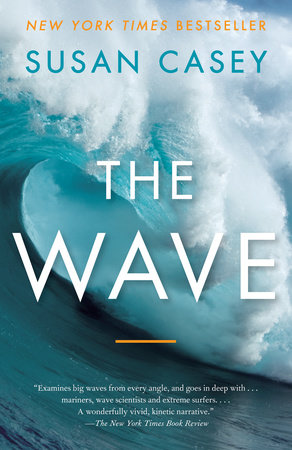 From Susan Casey, the bestselling author of The Devil’s Teeth, an astonishing book about colossal, ship-swallowing waves, and the surfers and scientists who seek them out. The following questions are intended to enhance your reading experience and to generate lively discussion among the members of your book group.

For centuries, mariners have spun tales of gargantuan waves, one hundred feet high or taller. Until recently, scientists dis­missed these stories—waves that high would seem to violate the laws of physics. But in the past few decades, as a startling number of ships vanished and new evidence has emerged, oceanographers realized something scary was brewing in the planet’s waters. They found their proof in February 2000, when a British research vessel was trapped in a vortex of impossibly mammoth waves in the North Sea—including several that approached one hundred feet.

As scientists scramble to understand this phenomenon, others view the giant waves as the ultimate challenge. These are extreme surfers who fly around the world trying to ride the ocean’s most destructive monsters. The pioneer of extreme surfing is the legendary Laird Hamilton, who, with a group of friends in Hawaii, figured out how to board suicidally large waves of seventy to eighty feet. Casey follows this unique tribe of peo­ple as they seek to conquer the holy grail of their sport, a one-hundred­-foot wave.

In this mesmerizing account, the exploits of Hamilton and his fellow surfers are juxtaposed against scientists’ urgent efforts to understand the destructive powers of waves—from the tsunami that wiped out 250,000 people in the Pacific in 2004 to the 1,740-foot wave that recently leveled part of the Alaskan coast.

1. Why do you think there isn’t more news coverage on sunken freighters, tankers, and bulk carriers? Do tragedies at sea strike a different chord in the popular imagination than say, a plane crash?

2. What’s the difference between surfing a wave and surviving it? What drives people to extreme situations and how does one draw the line between determination and courting disaster?

3. Many big wave surfers, like Laird Hamilton, are married with children. How do you think they rationalize putting their lives on the line for what many would consider sport?

4. Why do you think the psychological beating is often worse than the physical injury for surfers? Do you think Brett Lickle’s mishap towards the end of the book helped him see what was really important in life or psychologically cripple him?

5. Surfers and scientists have different methods of judging a wave’s intensity. Is one rubric more accurate than the other?

6. Susan Casey found a strong female presence in the scientific community that seems to be lacking in the surfing world. Why do you think surfing—and tow surfing in particular—seems to be so male-dominated? What drives more men than women to extreme sports?

7. Why is respect for the waves so important? What happens if you lose this respect?

8. Many surfers in the book refer to themselves as “watermen.” They’re not simply athletes or thrill seekers—they almost have a sixth sense when it comes to the water. What can we learn from these watermen in terms of how they regard and intuit the ocean? What responsibility, if any, do you think these adventurers have to the ocean and to one another?

9. Historically speaking, massive geological events occur frequently, but humans generally remember devastating natural disasters within their lifetimes.  Do you think this ability to forget events such as the Lisbon tsunami of 1755 and move on is part of what makes our species so resilient? Or do these sorts of memory lapses leave us ill-prepared to deal with future disasters?

10. After Susan Casey witnesses a sixty-eight foot wave at Killers, she remembers Laird Hamilton’s assertion—“If you can look at one of these waves and you don’t believe that there’s something greater than we are, then you’ve got some serious analyzing to do.” How has your perception of the ocean—and those who study it and ride its waves—changed after reading The Wave?

Susan Casey, author of New York Times bestseller The Devil’s Teeth: A True Story of Obsession and Survival Among America’s Great White Sharks, is editor in chief of O, The Oprah Magazine. She is a National Magazine Award-winning journalist whose work has been featured in the Best American Science and Nature Writing, Best American Sports Writing, and Best American Magazine Writing anthologies; and has appeared in Esquire, Sports Illustrated, Fortune, Outside, and National Geographic. Casey lives in New York City and Maui.
Learn More About The Wave
print

The Thing with Feathers

Dancing Naked in the Mind Field

Our Planet
Back to Top