Burning Down the House Reader’s Guide 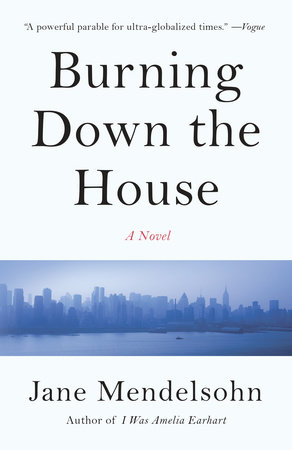 Burning Down the House Reader’s Guide

The introduction, author biography, discussion questions, and suggested reading that follow are designed to enhance your group’s discussion of Burning Down the House, a thought-­provoking novel by Jane Mendelsohn.

It begins with two girls: Neva, from the Caucasus, sold into the sex trade; and Poppy, the adopted daughter of a wealthy New York real estate family, the Zanes. As their paths cross and their fates intertwine in an exquisite high drama that blurs the lines between realism and myth, we travel with them from lavish weddings to the transglobal underworld; from London and New York to Laos and Istanbul; and we watch as the mighty Zane dynasty slips from greatness. Mendelsohn captures the emotional worlds of these characters with visceral immediacy, and transforms their private narratives into a larger story about the forces of globalization, human trafficking, and sexual violence. Gripping and psychologically acute, Burning Down the House is an extraordinary family saga that limns the inescapable connections between the personal and the political.

1. Where does the title of the book come from? What major themes of the novel does it expose or support? In addition to any literal references to fire or burning, what symbolic significance might the title have?

4. What view—­or views—­of love does the novel present? What kinds of love and relationships are depicted in the novel? Does one kind of love seem to triumph over all of the other kinds? Explain. How does love ultimately seem to be defined by the book’s end?

5. Poppy “always tells people that her family is like the House of Agamemnon or something out of Faulkner” (45). What does she mean by this? How would you categorize her family? How does the Zane family compare with other families in world literature? Alternatively, what makes them unique?

7. Evaluate the structure of the novel. How does it help to expose or support major themes of the book or assist in revealing or otherwise echoing the state of the characters and the Zane family as a whole?

8. How has Neva been affected by her experiences as a sex slave? Why does she find solace in comparing herself with a river? What has allowed her to go on and find strength in her new life? Has she found healing? If so, how? Why do you think that she chooses to share her story with Steve in particular, and how does he react to this?

9. Would you categorize Burning Down the House as a tragedy? What elements of classical Greek tragedy does the book contain? How does the book otherwise challenge, defy, resist, or transcend this genre?

10. Poppy says that Ian “is not one kind of person; like all of us, he has many aspects” (62). Later, Neva wonders, is Steve “the personification of evil or a wise man? Could anyone be all one or the other?” (181) Does the book ultimately support a fixed notion of good and evil or does it seem to support a more nuanced and complicated view of humanity and ethics? For example, do the characters in the novel seem to be defined more by nature or by their ethical choices?

11. In Chapter 21, Patrizia acknowledges that she believes she is having “not a crisis but an awakening” (139). What is awakening within her and what seems to be causing this awakening? How does she believe she has changed? Is her awakening ultimately a positive or beneficial one? Explain.

12. Jonathan muses in Chapter 24 that “nothing was pure” and that “we are all complicit” (164). What does he believe that everyone is complicit in? Do you agree? Why or why not? What examples are found in the novel? What seems to cause these characters to choose complicity? Do any of the characters in the novel resist? If so, what are the consequences of their actions?

13. What does Steve believe is the antithesis of democracy? What does he say democracy demands above emotion? How does he believe freedom is defined? How have these values been corrupted according to the novel? Does the book provide any indication of how this might be remedied?

14. Evaluate the motif of secretkeeping. Why does Ian choose not to tell Poppy the truth? Do you agree with his decision? Why or why not? What are the consequences of his decision? Why does Steve keep the secret of Poppy’s paternity from all involved for so long? Likewise, how does Poppy’s inability to be truthful with her family affect her own trajectory? What other secrets are kept and revealed in the novel and what are the effects of these actions? What does this ultimately suggest about truth?

15. In Chapter 27, Ian wonders if what has befallen him is “[a]n accident of nature or an intentional, ironic twist of fate” (202). Which notion does the novel ultimately seem to support—­a vision of nature and the accidental or the power of destiny and fate? How much control do the characters ultimately have over their lives? Could the tragedies in the novel have been avoided? Explain.

16. In conversation with Alix, Ian says: “People are not just who they are. They are histories, feelings, mistakes, what we imagine them to be” (257). What does he mean by this? Do you agree with him? Why or why not? Do the characters in the novel seem to know one another well? Does what they imagine one another to be match closely with reality? If not, what prevents them from really knowing one another?

17. What unites or draws the various characters of the novel together? Why does Neva confess that she feels close to the Zane family even though she did not relate to those families she worked for previously? Consider the other close relationships featured in the book. How does intimacy seem to be defined within the novel?

18. What does the book seem to suggest about the arts? Who are some of the artists in the novel and why do they choose to engage in the arts? Is their participation in the arts beneficial to them in any way? What do the arts offer to them that they need? Likewise, what does their own artistic output offer to others?

19. At the end of the book, when Poppy asks Neva for some words that will help her, how does Neva respond? Is her response surprising? Why or why not? What does Neva say “conquers all” (278)? Do you agree with her? Explain.

20. Evaluate the conclusion of the story, including the Epilogue. What happens to the surviving members of the Zane family and to Ian and Neva after Steve’s death? Is there any evidence of forgiveness, healing, or redemption by the book’s end? If so, can we tell what helps the characters attain catharsis?

Jane Mendelsohn is the author of three previous novels, including I Was Amelia Earhart, a New York Times best seller and a finalist for the Orange Prize; Innocence; and American Music. A graduate of Yale, she lives in New York City with her husband and children.
Learn More About Burning Down the House
print

The Tin Horse
Back to Top