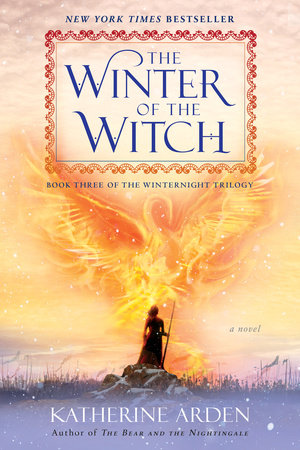 print
The Winter of the Witch Reader’s Guide

2. Discuss the ways in which Vasya and Morozko’s relationship has changed over the course of the Winternight Trilogy. What are the various roles they have held in each other’s lives, and where do they stand now?

3. Vasya meets a number of new chyerti that both help and hinder her along her journey. Do you have a favorite fairytale creature in this cast of characters?

4. Why do you think Konstantin is so obsessed with eliminating Vasya? Do you think his fixation on her is a result of hatred or passion? Is there a difference?

5. How does the loss of Solovey impact Vasya? Did she need to suffer this loss in order to fulfill her destiny? How do you feel about his return? Did it seem too convenient? Was it necessary?

6. Discuss Vasya’s lineage. Were you surprised to learn that Vasya descends from Baba Yaga, the witch of the wood, and Chernomor, the sea-­king? What do these familial ties imply about Vasya’s abilities, the journey she has taken, and the path she will take from here?

7. Vasya wields her newfound magical powers throughout her mission to save both the magical and mortal worlds. What do you think is the cleverest use of her powers? What is the most foolish thing she does with her magic abilities?

8. How does Pozhar compare as a companion in Vasya’s journeying to Solovey? Could Vasya have been successful without the help of the firebird?

9. At one point it is said, “Medved’s great gift is disorder, and his tools are fear and mistrust. . . . Until he is bound, you cannot trust anyone.” How does Vasya earn the trust of the many chyerti and people she encounters? Is there a key to how she wins them over to her side in spite of the chaotic atmosphere Medved has created?

11. What do you think of Vasya’s alliance with Medved? Did you think she would be able to trust him not to betray her?

12. Vasya has long fought to find a balance between the magical world and the Christian church so that both may coexist. How does this struggle for coexistence relate to the world today?

13. Throughout the series, Vasya has struggled to find her place in a society that dictates that a woman must either wed or become a nun. How has Vasya not only taken control of her own future but also influenced the fates of the many other women she has encountered along her journey?

14. The concept of memory (and lack thereof) is an important theme: Vasya must use the power of “forgetting the world was ever other than as you willed it.” To work her magic, Morozko is trapped by the loss of his memories, and the chyerti are desperate not to be forgotten in the minds of others. What does all this say about the power of memory?

15. In this conclusion to the trilogy, do you think Vasya has finally found the acceptance that she always sought from her family? What about that of the larger community? And among the chyerti? Which group do you think she most reliably found support from throughout her journey—­and which is most accepting of her in the end?

Learn More About The Winter of the Witch
print

The Harp of Kings
Juliet Marillier

Half Spent Was the Night
Ami McKay

The Girl and the Stars
Mark Lawrence

Haroun and the Sea of Stories
Salman Rushdie

The Heart of What Was Lost
Tad Williams

The Library of the Unwritten
A. J. Hackwith

Pride and Prejudice
Jane Austen
Back to Top