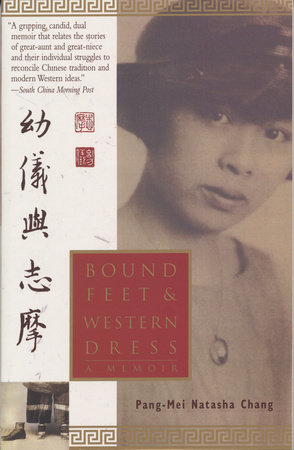 1. In Yu-i’s family, each child was assigned a role from the start, so that a child was often limited (or given opportunities) on the basis of his or her name. For instance, "Yu" means goodness, and "i" means propriety. Did Yu-i live up to her name? Did your name play a part in making you who you are?

2. Pang-Mei tells the story in Yu-i’s voice, after introducing each chapter with anecdotes from her own childhood or young adult life. Does this choice limit our understanding of either Pang-Mei or Yu-i? Did you want more or less of either woman’s story?

3. Yu-i believes that her family’s misfortune made them strong, a common theme in many immigrants’ stories. Does the struggle always mean something? Or is the need to believe in its importance a form of self-protection?

4. As a girl, Pang-Mei felt safest within her Chinese heritage when she was with Xu Ma, her amah. Do the children of immigrants, with a foot in each culture, bear the brunt of their parents’ decision to leave home?

5. How did family secrets harm the Chang family throughout its history?

7. Did Yu-i believe the legends and myths and rules that decreed that girls were not as valuable as boys?

8. Yu-i’s modesty is forceful–everything about her is understated. Do you think she knew how strong, smart, compassionate, and wise she was?

9. Yu-i describes a few incidents in which her family was not above bending the truth. Is there a contradiction between these actions and the Changs’ deep-rooted belief in responsibility, familial duty, and personal integrity?

10. Yu-i has conflicting feelings about her "big" feet, saying for instance, "…they could not make me educated. Nor could they make my husband care for me." Yet she also states unequivocally that she would never bind a daughter’s feet. Discuss the ways Yu-i was bound to tradition.

11. In China, up until ninety years ago, they bound young girls’ feet. In America today, young girls inflict serious physical damage upon themselves by starving or bingepurging as they try to meet unrealistic standards of physical beauty. Discuss the physical price women pay because of gender. Do men pay such a price?

12. Much of Hsuuml; Chih-mo’s treatment of Yu-i can be explained based on Chinese culture. Does this explanation excuse him? Or does a higher universal morality demand that people rise above "acceptable" standards of behavior in the times and culture they are born into?

13. Many artists, writers, performers, composers, and poets have been accused of being selfish, obsessive, irresponsible, even immoral–think of Rilke, Gaugin, and Wagner. Should we separate the person from the work he or she creates? Or is, to paraphrase Emerson, character more important than intellect?

15. Discuss the different silences in Yu-i’s life. Is the silence always oppressive?

16. Was Hs&uuml; Chih-mo’s remorse at Peter’s death a pose? If not, does it excuse his earlier irresponsibility toward his son?

17. Yu-i says she never believed the gossip that Lao Ye and Lao Taitai loved her more than they loved their son, Hs&uuml; Chih-mo. She excuses them by saying they "just did not understand Hs&uuml; Chih-mo." Do you agree? Or did they see their son’s character clearly?

18. Did the act of talking to Pang-Mei bring Yu-i to a new level of understanding her life, making her, in a sense, more modern, less traditional? Did the means become an end?

19. Pang-Mei wears two dresses at her wedding, wanting to incorporate her heritage with her modern life and American husband. On the basis of her family story, do you think she’ll be successful?

I was born on the Fourth of July in Boston, Massachusetts, and grew up in suburban Connecticut as American as everyone else around me. I spoke English at home, loved Nancy Drew and the Hardy Boys, and even considered myself like Harriet the Spy. But, filled with stories of China from my parents and my amah, who had brought up my father in Shanghai and was now in charge of my siblings and me, I dreamed of other lands, and felt drawn to know more about my Chinese heritage. In 1980, I visited China for the first time on a six-month sabbatical with my father, a professor at Yale. I met with many relatives and even lived with some for several weeks, sharing a room with six other people, and a bathroom and kitchen with nine other families. I recently married and moved to Moscow with my husband. Before that, I lived in New York and worked as an attorney.
Learn More About Bound Feet & Western Dress
print

Child of War, Woman of Peace

Feather in the Storm

Lord of All the Dead

A Man of Good Hope

Sky Burial
Back to Top