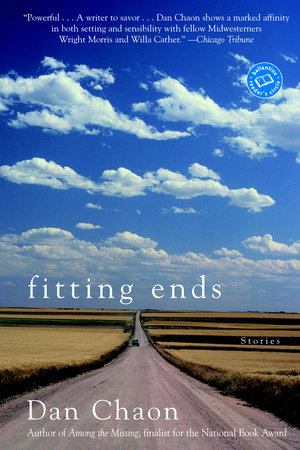 1. Chaon has professed to being influenced by the well-known
old story, "The Lady or the Tiger?" Like that story, many of
the stories in Fitting Ends deliberately end on the edge of a
moment, leaving the reader to decide what the future holds
in store for a character. Do the stories point the reader
toward a particular conclusion, or do they leave the unanswered
questions entirely to the reader’s own view of human
nature?

2. In "Presentiment," Rich thinks: "Love didn’t have anything to do with the outside world: It just happened. Some mysterious brain chemistry set in, and you couldn’t avoid it." Is his love for his autistic son really so mysterious? How does this example of love compare with others in the book? Are some types of love more positive than others?

3. Many of the young characters in Fitting Ends exhibit a great dread of the future. What does their pessimism stem from? Is it a function of psychology? Family and social circumstances? The larger culture? Do you think these young adults will continue to face the world with such trepidation as they get older, or is there hope that they will grow out of it?

4. A review of Fitting Ends in the Chicago Tribune said, "Dan Chaon shows a marked affinity in both setting and sensibility with fellow Midwesterners Wright Morris and Willa Cather." What is a "Midwestern sensibility"? Are there places in these stories that seem to particularly represent such a sensibility? Which aspects of Midwestern life does Chaon seem critical of, and which does he appear to view with affection?

5. In "Thirteen Windows," the narrator admits that sometimes he sees things that aren’t there, and many of the other characters in the book struggle with skewed perceptions of the world around them. To what extent are the various characters’ problems a result of misinterpretations of reality? To what extent are the characters lying to themselves? Do you see some of the narrators as more clear-sighted and honest than others? Which ones seem most trustworthy?

6. "Chinchilla," "Accidents," and "Going Out" all present children who must cope with a parent’s alcoholism or mental illness, but every child responds to his or her situation in a different way. Why? What are the factors that seem to influence each of these children the most?

7. Ghosts and ghostly visions figure prominently in several of the stories. In other stories a memory of a person’s past self haunts the present. What do ghosts represent in the world of these stories? What would it take to dispel these ghosts?

8. Several of the characters in the book have made an effort to break loose from their small-town roots, and they are often in conflict with those they have left behind. What are the advantages and disadvantages of setting off on one’s own, versus the decision to stay put and remain close to one’s origins?

How We Are Hungry

Moral Disorder and Other Stories

The Darts of Cupid

Among the Missing
Back to Top