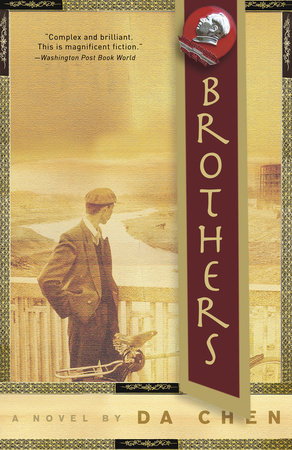 At the height of China’s Cultural Revolution, a powerful general fathered two sons–Tan, born to the general’s wife and into a life of comfort and luxury, and Shento, born to the general’s mistress, who took her own life moments after delivering her child. Growing up, each boy remained ignorant of the other’s existence. Tan enjoyed the best schools, the finest clothes, and the prettiest girls. Shento was raised on the mountainside by an old healer and his wife, until their deaths landed him in an orphanage, where he was always hungry, alone, and frightened.

Now, though on divergent roads, each brother is driven by a passionate desire–one to glorify his father, and one to seek revenge against him. Separated by distance and opportunity, Tan and Shento follow the paths that lie before them, while unknowingly falling in love with the same woman and moving toward the explosive moment when their fates finally merge.

The questions below are intended to help guide your reading group’s discussion of this epic, dynamic historical novel by bestselling memoirist Da Chen.

1. Tan’s family and Shento’s adoptive family differ greatly in economic situation and social status. How do the upbringings of the two boys affect who they become, what they believe, and what they eventually accomplish as men?

2. Does Shento’s birth under tragic circumstances determine his fate, as his mama and baba speculate?

3. What do Tan’s two grandfathers represent for him throughout his youth? Does the incident on his first birthday with the abacus, the toy tank, and the globe foreshadow any of his actions later in life? How?

5. What does New York City represent for Tan? Why do you think he so glorifies early capitalism in America? Why are J.P. Morgan, the Carnegies, the Rockefellers, and the Lehman brothers such important historical figures to him?

6. Which characters act as saviors, both literally and figuratively, throughout the book? Whom do they save? How? Why?

7. What is Shento’s reaction when his hero, President Heng Tu, tells him on his deathbed that he had not been the one to save Shento’s life all those years ago? Why do you think Heng Tu took Shento under his wing, knowing he was the son of his sworn enemy, Ding Long?

8. In what ways can Shento and Tan each be considered a revolutionary, both in a political sense and in a philosophical sense?

9. Tan and Shento are worshipped as heroes by different people and groups throughout their lives. Who are these people/groups, and what do Tan and Shento represent for them?

10. Discuss the theme of betrayal in the book. How is Shento betrayed at different points throughout his life, and by whom? How about Tan? Sumi? How does being betrayed drive each of them to pursue his or her goals?

11. Near the end of the book, both Shento and Tan get shot while trying to get Sumi back. How does each shooting happen? How does each man react, and why do you think they react the way they do?

12. Do Shento and Tan find peace and personal redemption at the book’s conclusion? How? Do you think they begin to forgive those who have betrayed them?

13. Could this story have taken place at a time in history other than the tumultuous period after China’s Cultural Revolution? What about these two contrasting protagonists–one representing communism, the other democracy–makes this particular time and place such an ideal backdrop for the tale?

14. Who do you identify with more strongly as a character, Shento or Tan? Why?

The Man From Saigon

Drop Zone
Back to Top