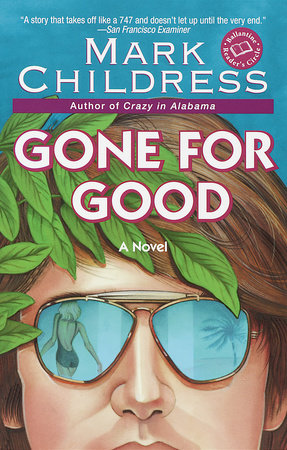 V for Victor
"A speeding bullet of a book . . . In this adventure story the hero, Victor, is sublimely lost, a celebrated ragamuffin like Huck Finn."
–The New York Times Book Review

A World Made of Fire

"That rarest of finds, an unsentimental coming-of-age story, the novel is also an engrossing mystery. . . . We couldn’t ask for more."
–San Francisco Chronicle

"A wonderful and powerful novel . . . Mark Childress is a novelist of astonishing gifts."
–Pat Conroy, author of The Prince of Tides

"Tender is more than just a fine novel; it is a big, all-American, Technicolor dreamboat of a book, as vital and intense as anything I’ve read in the last ten years."
–Stephen King

"Haunting . . . An evocation of an American phenomenon and the time and place that nurtured an ascent to glory. Childress gets everything right."
–The Los Angeles Times Book Review

"Something that nobody has ever written before . . . Childress plays out his two hands here, civil rights and husbandicide, like a master playing out a fancy game of double solitaire."
–The Washington Post Book World

"Triumphant . . . It is a measure of Mr. Childress’s skill as a novelist that he soon had me eating out of his hand. . . . This novel seems not only fresh and original but positively inspired."
–The New York Times Book Review

"If Flannery O’Connor and Stephen King had written a book together, this would be it. Hilarious and scary!"
–Fannie Flagg, author of Fried Green Tomatoes at the Whistle Stop Cafe

1.         Before crashing into the island, Ben was feeling disenchanted with his fame and success: "His life would be perfect, he thought, if he could disappear right now. . . ." Why do you think fame and music stopped being fun for Ben? What kind of story would he have had if he had not gotten lost?

2.         When Ben realizes that he has no choice but to land his plane in the water, he thinks of all the things he wishes he had and had not done. He takes photos of himself and the island and writes a note to Ben Jr., briefly thinking of communion as a child and his father and his son’s smile. You are in the same situation: What do you do with the few moments before you crash?

3.         Consider the voices that tell the story. The chapters about Superman are told through a narrator and refer to Superman in the third person. The chapters about Ben Jr., however, are told through his own voice. How does this affect how we feel about the characters? Do you feel closer or sympathize with one more than the other? How does the narrator’s voice relate to Superman? Is it Superman speaking to himself, the author, or something more?

4.         After Amelia’s death, Ben has an epiphany about God and life on the island: "God is the frog, the spider, the firefly with twin headlamps. . . ." Daisy immediately notices the difference in him. How does Ben make this spiritual change? Does this come from realizing his past failures? From letting the nature around him finally affect him? From the Red Dot that Rabbit gave him? Have you ever had realizations like this? If so, what caused them, or allowed them?

5.         After Daisy and Ben were together for the first time he had the urge to run from her because he needed to stay focused on getting back home: "Every waking moment would be given to adoring her, inhaling, imbibing her. She would become your addiction, the thing you did with your life." Later, he accepts his place on the island, a life with Daisy, and stops trying to get off the island: "The months slipped through his fingers, and turned into years." In a sense, he was right in that loving her did trap him. Is that always the case with love? Was he being true to himself by running away from her or by being with her–or both?

6.         If you could spend time with one of the mysteriously disappeared, who would you choose and why? Whose character’s presence surprised you the most? Were Amelia’s and Daisy’s personalities what you expected from knowing their pasts?

7.         Fame controls most of the people in this story. The Magician was willing to sacrifice people for the immortality he thought fame could give him. Do you think you can live on through fame? What does this story say about superstardom?

8.         How does celebrity affect your own life? Would you want to be famous? If so, could you avoid the unhappiness it caused some of these characters? How important are celebrities to you personally? How much do you know about them? Do you think our culture is overly obsessed with famous people? Why or why not?

9.         Considering how little his father was involved in his life, why do you think Ben Jr. felt a need to find him? Do you see similarities between the two characters?

10.         We see Alexa only through Superman or Ben Jr. until nearly the very end of the book. How did your feelings about her change after reading chapter 28, "Her Real Life"? Do you think her husband or her son understands her well?

11.         Consider this conversation between Ben and Daisy: "But everything they told us is a lie!" "Welcome to the real world, Ben. Where’ve you been keeping yourself? People don’t want the truth. They just want confirmation of the lies they’ve already heard."         If you, like Ben, were faced with incredible conspiracies, dead people, and magical powers, would you be able to adjust? Would you be able to believe what was happening? How do people learn to accept the impossible?

13.         Considering the fairy-tale aspect of the book, what would you say the moral to this fable is?

About Mark Childress Mark Childress was born in Alabama, grew up in the Midwest and the South, and was graduated from the University of Alabama. His articles and reviews have appeared in the New York Times, the Los Angeles Times, the San Francisco Chronicle, the Times Literary Supplement, Southern Living, and the Birmingham News, among other publications. He is the author of three children’s books and four previous novels, A World Made of Fire, V for Victor, Tender, and Crazy in Alabama. He lives in Manuel Antonio, Costa Rica.
Learn More About Gone for Good
print

The Genesis Code
Back to Top