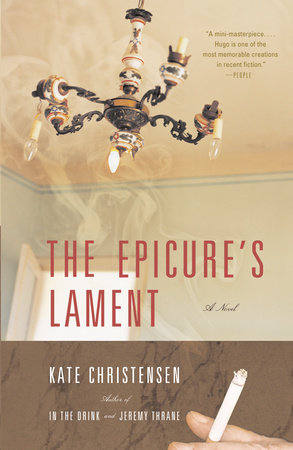 “A mini-masterpiece. . . . Hugo is one of the most memorable creations in recent fiction.” –People

The introduction, discussion questions, suggested reading list, and author biography that follow are designed to enhance your group’s reading of Kate Christensen’s The Epicure’s Lament, an amusing yet poignant novel about a brilliant scoundrel whose loathsome escapades and shocking musings are hilarious, outrageous, and irresistible.

Self-avowed misanthrope and trust-fund beneficiary Hugo Whittier has decided to live out the brief remainder of his middle age in his decaying family home, Waverley, in upstate New York. He fills his days making runs to town to maintain his supply of cigarettes, preparing fine meals, and hitting on much younger women than himself. Although he is dying of Buerger’s disease–a nearly always terminal disease caused by smoking–Hugo refuses to quit. But Hugo’s intention to die quietly, albeit painfully, alone is thwarted by a parade of family members who slowly overtake his home. First, his brother Dennis, who has just left his wife, followed by the equally unwelcome return of Sonia and Bellatrix, Hugo’s own estranged wife and daughter, after ten years of separation. Next, Hugo’s aging gay bachelor Uncle Tom, whom homophobic Hugo naturally despises, announces his intention to return. To top it off, a mysterious figure from Hugo’s murky past turns up in the sleepy Hudson River town. While these events unfold, Hugo scribbles furiously into notebooks, recording in his final months the details of his pain, his general disgust with his family, his complicated and somewhat sordid past, his affairs with (and lust for) a variety of women, and the preparation of his last gourmet meal. Hugo’s original voice is caustic and clever, often vicious, and sometimes weary–but always honest. In spite of himself, Hugo manages to insinuate himself under the skin of the reader, who, like Hugo’s family, can’t seem to get enough of him.

1. What exactly is Hugo’s lament? What about people and life causes him such antipathy? Do fine food, cigarettes, and sex provide satisfaction or fulfillment for Hugo?

2. Hugo claims that he desires to be alone, but he often finds himself surrounded by people. Does he ever choose company instead of solitude, and what do these choices betray about Hugo’s character?

3. Is there anything enticing or appealing about Hugo’s character? Why do women find him attractive? Why does his family care about him? Does the reader come to care about him, too? If so, why? Does Hugo change his attitude with respect to his family by the end of his memoirs? Does Hugo really want to die, or might Hugo’s carefully planned Christmas Eve suicide attempt be, ironically, a final attempt to connect to his family?

4. Over the course of Hugo’s memoirs Christensen slowly reveals to the reader the cracks in his tough outer shell: his strong love for his father and his deep-seated resentment of his mother [pp. 69 and 268]. These feelings culminate in a tearful therapy session at the end of the book [p. 342]. Does the damage to Hugo’s childhood psyche by the loss of his father and the treatment he received from his crazy mother explain his behavior as an adult? Is the emotional revelation during Hugo’s therapy session at the end of the novel satisfying or frustrating?

5. Is Hugo really a victim and not a malefactor? Is it true, as Hugo states, that he “never knowingly caused harm to another person” [p. 309]?

6. Hugo observes wryly, “Dennis and I are limited to well-built old American cars and ordinary women with pedestrian tastes, which seem to suit both of us equally well, one of the few things we have in common” [p. 44]. What is Dennis like, and do Hugo and Dennis have more in common than Hugo claims? Could Hugo’s description of Dennis as a “narcissist” [p. 48] apply to Hugo as well?

7. How thoroughly does Christensen develop the secondary characters in the novel? How is the reader’s perception of them affected by the fact that characters such as Sonia, Dennis, Marie, Stephanie, and Hugo’s parents are presented only from Hugo’s viewpoint in his notebooks? Are any of the other characters more or less sympathetic than Hugo?

8. Hugo tells Stephanie, “My wife left me because I both defied and bored her” [p. 59]. Is this an accurate explanation for Sonia and Hugo’s separation? What is the nature of each of the marriages portrayed in the book? How would Hugo, Dennis, and Stephanie each describe their own marriages and marriage in general?

9. Hugo informs us, “I began to write; I disliked it very much and still do. However, it never seemed to be a matter of preference but absolute necessity” [p. 90]. Why does Hugo write? How has his failure as an author affected him?

10. What kind of inspiration does Hugo find in the writings and lives of M.F.K. Fisher and Montaigne? How are these two literary figures alike and how are they different? How does Christensen use other literary works [e.g., Anna Karenina, (pp. 32 and 298) and Hamlet (p. 252)], as metaphors in the novel?

11. Hugo describes himself and his feelings about his family home: “I, as a laissez-faire, elitist man of no people, am of the (minority) opinion that the ludicrously named Waverley and the equally ludicrous life-style it was meant to support have reached a necessary end. . . . In these rooms I feel the intolerable pressure of too many things, all the historical significance of a family whose names are, in the end, more important and memorable than any of the individual souls who bore them” [pp. 39–41]. What does the image of Waverley symbolize about American society? How does Hugo both personify Waverley and defy it? Is Hugo’s distaste for his family heritage somehow hypocritical or, at least, disingenuous?

12. Hugo writes, “The beauty of human domestic existence is the control we exert over our surroundings. Nature is only attractive to me insofar as I can mow, cook, kill, or change its components to my liking. The tree outside my window is a microcosm of inhuman order” [p. 73]. What does the tree’s resident, a bird Hugo names Erasmus after the medieval theologian, symbolize for Hugo? Is Hugo’s obsessive-compulsive behavior regarding order evidence of deeper psychological problems?

13. A review of The Epicure’s Lament in Publishers Weekly describes Hugo as an antihero. What is an antihero? Does Hugo fit this literary archetype? Christensen herself has described her novel as belonging to a genre she labels Loser Lit. She explains, “It is kind of like pornography—you know what it is when you see it. For me, it has to do with failure, anger, a kind of desperate hilarity and arrogance. In Loser Lit, the hero has no odds to overcome. They are anti-pluck. They have been given everything at the beginning and they screw it up.” (Review of The Epicure’s Lament in TheJournalNews.com, February 22, 2004). How are the concepts of Loser Lit and the anti-hero similar or different?

14. Does the specter of September 11, 2001, referenced in several instances [pp. 19 and 83], impact the behavior of the characters in the novel or the mood of the novel in any way?

15. How are the Jewish characters (Shlomo, Tovah and Louisa) and the religion of Judaism (“the greatest religion in human history,” p. 79, according to Hugo) portrayed in the novel?

16. Is Christensen, as a female writer, successful in creating a believable male voice in Hugo?

Kate Christensen is also the author of the novels In the Drink and Jeremy Thrane. Her essays, reviews, and articles have appeared in various publications including Salon, The Hartford Courant, Elle, and the bestselling anthology The Bitch in the House. She lives in Brooklyn with her husband.

Man Walks Into a Room
Back to Top