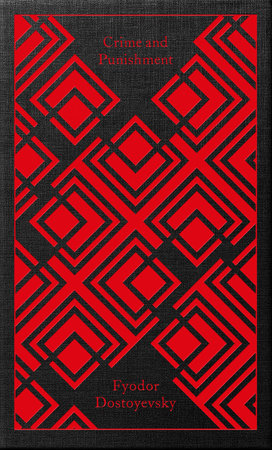 When Dostoyevsky started work on Crime and Punishment in the summer of 1865 he was depressed and in serious financial straits. A recent gambling spree had depleted his savings, and he owed money for personal expenses as well as bills for Epokha, the journal he founded and had been forced to discontinue. Threatened with debtors’ prison, he was approached by an unscrupulous publisher who offered a ridiculously exploitative contract under which Dostoyevsky signed over the copyrights to all his existing works and agreed to write a work of fiction by the end of the following year. For all this he was paid the sum of three thousand rubles, most of which was quickly swallowed up by promissory notes; what little remained was squandered at the gaming tables. Destitute once again, Dostoyevsky forced himself to concentrate on his writing, and by that fall had conceived of the idea for a novel-length work about a family ruined by alcohol.

The roots of Crime and Punishment can be found in various episodes in Dostoyevsky’s life. His original idea, a murderer’s first-person confession, came to him during his prison term in Siberia—an experience that profoundly changed his political views and instilled in him a life-long respect for order and authority. There is also evidence that he conceived of the Marmaledov family as the basis for a novel to be titled “The Drunkards,” but which was never published. Finally, Dostoyevsky was reacting to the political climate in St. Petersburg, where the impulses of the revolution could be found in the nihilist and radical movements, which Dostoyevsky abhorred. Regardless of its origins, Dostoyevsky meant the novel to be as close to perfect as possible. He took extensive—now famous—notes regarding its structure, toying with different points of view, character, structure, plot, and a variety of thematic strains.

The efforts paid off. Crime and Punishment is a superbly plotted, brilliant character study of a man who is at once an everyman and as remarkable as any character ever written. It poses a simple question, “Can evil means justify honorable ends?” and answers it convincingly without didacticism or naiveté. Dostoyevsky intimates himself so closely with Roskolnikov’s consciousness, and describes his turmoil and angst so precisely and exhaustively, that it is easy to forget that the events take place over the course of a mere two weeks. He encourages us to identify with Roskolnikov: the painstaking descriptions of the student’s cramped, dingy quarters; the overpowering sights and sounds of a stifling afternoon on the streets of St. Petersburg; the excruciating tension of Porfiry’s interrogation—all serve to place the reader at the heart of the action: Roskolnikov’s fevered, tormented mind.

The murder itself is almost incidental to the novel; Dostoyevsky devotes no more than a few pages to describing its execution, although he details the painful vacillations that precede the incident and, of course, exposes every aspect of its aftermath. Similarly, Roskolnikov’s punishment, in the literal sense, is put off until the epilogue, with his sentence—reduced to seven years due to the accused’s apparent temporary insanity—to a Siberian labor camp. Thus Dostoyevsky brilliantly invites readers to put forth their own notions of Crime and Punishment, and engages us in an irresistible debate: Who is the real criminal? Marmeladov, for abandoning his family? Luzhin for exploiting Dunya? Svidrigailov for murdering his wife? Sonya for prostituting herself? The greedy pawnbroker whom Roskolnikov murdered? Or, to turn the question around: Who among us is not a criminal? Who among us has not attempted to impose his or her will on the natural order? Furthermore, we are made to understand that Roskolnikov’s true punishment is not the sentence imposed on him by the court of law, but that imposed on him by his own actions: the psychological and spiritual hell he has created for himself; the necessary sentence of isolation from his friends and family; the extreme wavering between wanting to confess his crime, and desperately hoping to get away with it. Compelled, ultimately, to confess his crime—and the confession scene is the only incident in which Roskolnikov actually admits to the crime—we feel that Roskolnikov has suffered sufficiently. Indeed, the epilogue with its abbreviated pace and narrative distance feels like a reprieve for the reader as well as for the criminal. Finally, in Siberia, Roskolnikov has found space.

The public reception of Crime and Punishment was enthusiastic—if a little stunned. There was much discussion about the novel’s overwhelming power and rumors of people unable to finish it. Readers were shocked by Dostoyevsky’s gruesome descriptions and enthralled by his use of dramatic tension. Perhaps the most virulent, and unexpected, criticism came from readers who felt that Dostoyevsky’s portrait of the nihilist movement was an indictment of Russian youth and that its premise was inconceivable. For more than a century, critics have argued about the book’s message: Is it a political novel? A tale of morality? A psychological study? A religious epic? As Peter McDuff points out in his Introduction to the Penguin Classics edition, interpretations may be more revealing of the critic than of the text. Whatever Dostoyevsky’s purpose—political, moral, psychological, or religious (and most likely he meant to touch on each of these themes)—one thing is certain. In Roskolnikov, Dostoyevsky has created a man who is singular yet universal. He is someone with whom we can sympathize, empathize, and pity, even if we cannot relate to his actions. He is a character we will remember forever, and whose story will echo throughout history.

Fyodor Mikhailovich Dostoyevsky was born in 1821 at a Moscow hospital where his father was employed as a doctor. The family was poor, but their descent from 17th-century nobility entitled them to own land and serfs. Dostoyevsky’s mother, Maria, was loving and religious; his father, Mikhail, tended toward alcoholism and violence, and his cruel behavior toward the peasants on their small estate resulted in his murder when Fyodor was eighteen years old.

Fyodor was the second of eight children. He was particularly close to his younger sister, Varvara, whose unfortunate marriage may have inspired Dostoyevsky’s portraits of both Dunya and Sonya. His older brother, Mikhail, shared Dostoyevsky’s literary and journalistic interests as well as his early social ideals. Together they attended secondary schools in Moscow, then the military academy in St. Petersburg, followed by service in the Russian army.

Dostoyevsky broadened his education by reading extensively in an attempt to sharpen his literary skills. As a youth he read and admired writers of all nationalities, including Dickens, Hugo, and Zola, and imitated some of Russia’s literary geniuses, particularly Gogol. He also began a tortured acquaintance with Turgenev, which was to continue throughout his life.

His first novel, Poor Folk, was published in 1846. This tale of a young clerk who falls haplessly in love with a woman he cannot possess led the literary lion Victor Belinsky to proclaim Dostoyevsky as the next Gogol. Dostoyevsky’s entrance into St. Petersburg literary society had begun—but his celebrity status was quickly overshadowed by his somewhat obnoxious behavior. Eventually, Dostoyevsky found another group to join, this time a circle of intellectual socialists run by Mikhail Petrashevsky. Given the reactionary climate of the time, the Petrashevsky group’s revolutionary ideas were both exciting and dangerous, and, although Dostoyevsky was far from being a revolutionary, his alignment with the faction brought him to the attention of the police. In 1849 he and the rest of the Petrashevsky group were arrested for subversion. Dostoyevsky was imprisoned at the Peter and Paul Fortress where he and others were subject to a mock execution—an understandably traumatic experience which seems to have triggered an epileptic condition that would plague Dostoyevsky throughout his life. He spent the next five years at hard labor in Siberia, where his acquaintance with the criminal community would provide him with the themes, plots, and characters that distinguish many of his greatest works, including Crime and Punishment.

Dostoyevsky returned to St. Petersburg in 1859. The next decade was filled with emotional and physical turmoil. In 1864 the deaths of his wife, Maria, and his beloved brother, Mikhail, deepened his debt and drove him to gambling. He embarked on a doomed affair with Apollinaria Suslova, who vacillated between admiring and despising him. He also witnessed the dissolution of his literary journal and formed a disadvantageous relationship with an unscrupulous publisher. Yet the 1860s were also a period of great literary fervor, and in 1865, the publication of Crime and Punishment paved the way for a series of novels—including The Idiot, The Devils, and The Brothers Karamazov—that both reclaimed his position in Russia’s pantheon of great living writers, and brought stability to his personal and financial affairs. He married his stenographer, Anna Grigorievna Snitkin, with whom he fathered four children, and established himself as a leading conservative who often spoke out against revolutionary activity. In June of 1880, Dostoyevsky attended a celebration of the great novelist, Pushkin, during which he delivered a speech in praise of the writer. His words were met with great adulation, and the event marked what was perhaps the highest point of public approbation Dostoyevsky would ever attain. Little more than six months later, on January 28, 1881, Dostoyevsky died of a lung hemorrhage. His funeral, attended by nearly thirty thousand mourners, was a national event.

The Magic Mountain
Back to Top