Tess of the D’Urbervilles Reader’s Guide 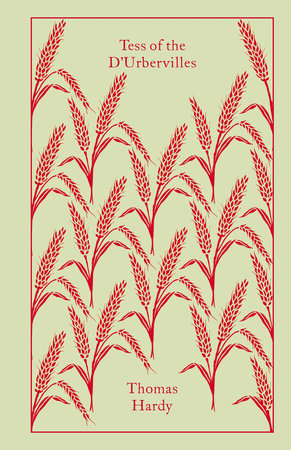 Tess of the D’Urbervilles Reader’s Guide

Soon after he completed Tess of the D’Urbervilles in 1891, Thomas Hardy wrote of the novel’s heroine, Tess Durbeyfield, “I lost my heart to her as I went on with her history.” Sadly for Hardy, his affection for his protagonist did not translate into an immediately loving popular reception for his book. Now regarded as a masterwork of realist fiction, Tess of the D’Urbervillesstunned Hardy’s Victorian readership with its frank portrayals of sexual desire and its candid indictment of both divine and human injustice. Today, long after the scandal that surrounded Tess has faded into history, the majesty of Hardy’s artistic achievement endures.

The “fine and handsome” daughter of a poor country peddler, with evidently little more than her brimming emotions and her “large innocent eyes” to distinguish her from the other girls in her home village of Marlott, Tess Durbeyfield might have looked forward to a happy, if uneventful, life. Instead, her father’s poverty and her family’s vain desire to exploit a recently discovered ancestral link to nobility cause Tess to fall under the destructive influence of Alec D’Urberville, a libidinous, unprincipled rake who steals her innocence and impregnates her. With slow, painful effort, Tess strives to recover her reputation and self-respect, and she resolves never again to surrender to passion. Then, into her life walks the captivating Angel Clare, the free-thinking but staunchly virtuous son of an Anglican vicar. Despite her efforts to rein in her sensuous nature and tremendous vitality, Tess falls worshipfully in love with the young man, and he with her. Yet an ominous complication looms: will Angel continue to return her affections once she reveals the disgrace of her sexual past?

Set against the vivid, tempestuous natural canvas of Hardy’s beloved Wessex, Tess of the D’Urbervilles is a gripping tragic romance, as well as an elegiac portrait of a pastoral way of life already under threat from the encroachments of the machine age. But it is also more than this. It is one of the most probingly philosophical novels ever written, meditating deeply on the irresistible forces that drive us toward both passion and pain. With superbly crafted prose, a peerless eye for beauty, and an astonishing moral ruthlessness, Thomas Hardy dissects the emotions of vanity, guilt, desire, and love that dwell deep within us all, elevating the seemingly commonplace struggles of an apparently unexceptional young woman to the very heights of tragedy.

The preeminent British novelist of the late Victorian era and one of only a handful of authors to achieve distinction both as a novelist and as a poet, Thomas Hardy was born in Upper Brockhampton in the county of Dorset in 1840. Although he initially considered a career in the ministry, he lost his religious faith in his early twenties and, for a time, pursued a career as an architect. While still an architect, Hardy published such novels as Under the Greenwood Tree (1872), A Pair of Blue Eyes (1873), and Far from the Madding Crowd (1874). The latter of these was so successful that he was able to give up architecture and support himself solely as a writer. As a novelist, he is best remembered for his “Wessex” novels, so called because they are set in stark rural landscape of the southwest counties of England, which Hardy renamed Wessex in his fiction. Along with Tess of the D’Urbervilles (1891), these novels include The Return of the Native (1878), The Mayor of Casterbridge(1886), The Woodlanders (1887), and Jude the Obscure (1896). In these often sublimely pessimistic novels, Hardy persistently explores the struggle of humankind against the indifferent natural forces that he perceived to dominate life and to thwart our best hopes. Following the deeply hostile receptions that greeted Tess of the D’Urbervilles and Jude the Obscure, Hardy abandoned the novel for poetry. He went on to publish more than nine hundred poems, in which he continued to express his concerns about human frailty and the power of fate. Hardy died in 1928 and is buried at Westminster Abbey.

Learn More About Tess of the D’Urbervilles
print

Jane Eyre
Back to Top