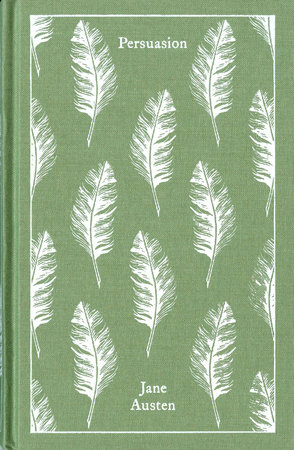 Twenty-seven-year old Anne Elliot is Austen’s most adult heroine. Eight years before the story proper begins, she is happily betrothed to a naval officer, Frederick Wentworth, but she precipitously breaks off the engagement when persuaded by her friend Lady Russell that such a match is unworthy. The breakup produces in Anne a deep and long-lasting regret. When later Wentworth returns from sea a rich and successful captain, he finds Anne’s family on the brink of financial ruin and his own sister a tenant in Kellynch Hall, the Elliot estate. All the tension of the novel revolves around one question: Will Anne and Wentworth be reunited in their love?

On the most basic level Persuasion is a love story, both interesting and entertaining, rich in intrigue and romance. On a deeper level it examines human foibles and societal flaws. The question of the importance of propriety is raised frequently, as is the issue of appearance versus reality.

Readers of Persuasion will discover Austen’s talents on full display: her skill for delicate, ironic observations on social custom, love, and marriage nor her ability to apply a sharp focus lens to English manners and morals.

Jane Austen was born on December 16, 1775, at Steventon near Basingstoke, the seventh child of the rector of the parish. She lived with her family at Steventon until they moved to Bath when her father retired in 1801. After his death in 1805, she moved around with her mother; in 1809, they settled in Chawton, near Alton, Hampshire. Here she remained, except for a few visits to London, until in May 1817 she moved to Winchester to be near her doctor. There she died on July 18, 1817.

As a girl Jane Austen wrote stories, including burlesques of popular romances. Her works were only published after much revision, four novels being published in her lifetime. These are Sense and Sensibility (1811), Pride and Prejudice (1813), Mansfield Park (1814), and Emma (1816). Two other novels, Northanger Abbey and Persuasion, were published posthumously in 1818 with a biographical notice by her brother, Henry Austen, the first formal announcement of her authorship. Persuasion was written in a race against failing health in 1815-16. She also left two earlier compositions, a short epistolary novel, Lady Susan, and an unfinished novel, The Watsons. At the time of her death, she was working on a new novel, Sanditon, a fragmentary draft of which survives.

Great Expectations
Back to Top