Across the Nightingale Floor Reader’s Guide 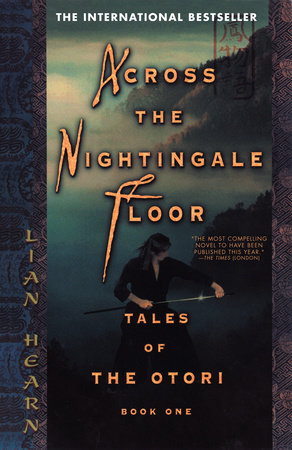 Across the Nightingale Floor Reader’s Guide

INTRODUCTION
This first book in a new epic trilogy has already become a bestselling sensation in England and Australia, earning comparisons to Harry Potter, The Lord of the Rings, and Crouching Tiger, Hidden Dragon. It begins with Legend of a Nightingale Floor in a black-walled fortress—a floor that sings in alarm at the step of an assassin. It will take all the skills of an ancient Tribe, and all the passion of true courage, for one orphaned youth named Takeo to discover the magical destiny that awaits him…across the nightingale floor.

Lian Hearn is a pseudonym. The author was born in England, has studied Japanese and has a lifelong interest in Japan.

A CONVERSATION WITH LIAN HEARN

I started writing Across the Nightingale Floor with the four main characters in my head and the opening sentence in Takeo’s voice. I was in Akiyoshidai International Arts Village in Yamaguchi Prefecture; it was a damp, humid afternoon in September. The light was pale and opalescent. Water trickled from the pools around the artists’ residence, carp splashed and occasionally a kingfisher swooped above the pool. I was writing in a notebook with a black gel pen I’d bought in Himeji. I wrote ‘My mother used to threaten to tear me limb from limb.’ Later I changed this to ‘into eight pieces’. I occasionally like to use Japanese idioms translated literally to give the feeling that the book is not written in English.

For many years before I had steeped myself in Japanese history and literature, reading widely, watching films, studying the language. Now I had several weeks alone in Japan in this idyllic place; the challenge was to see if I could bring to life what had lain within my mind all that time.

Slowly the world of the Otori began to evolve. I often went to Hagi, the old castle town of the Choshuu clan. I visited samurai houses and looked at artefacts in museums. I walked in the mountains behind the arts village, through the rice fields and by the river. Everywhere I tried to picture how my characters might have lived five hundred years ago. When people spoke to me I had to listen intently, using my ears as I had not done since I was a child. I heard everything but was more or less mute myself. So Takeo became.

I became addicted to gel pens and bought them by the handful. I carried my notebook with me and wrote on the road, on trains and planes and in waiting rooms. I was in Fukuoka when the entire ending of the book fell into place. I could hardly contain my excitement and emotion, yet actually to write it was painfully difficult.

In Japanese art and literature I am fascinated by the use of silence and asymmetry. I like the concept of ma: the space between that enables perception to occur. I wanted to see if I could use silence in writing. So the style is spare, elliptical and suggestive. What is not said is as important as what is stated.

I am interested in feudalism. Whenever democracy and the rule of law break down human societies seem to revert to feudalism. I wanted to write a ‘fantasy’ set in a feudal society, but I wanted to write about real people whose emotions are all the more intense for being restrained by the codes of their society. There are no traditional villains in my story though there are antagonists. Iida Sadamu and Otori Shigeru are from the same class and background. Iida has been corrupted by power, whereas Shigeru is compassionate by nature but essentially they are the same. One is not a monster, the other not a super-hero. My characters seek power, they are flawed and they make mistakes, but they love life and grasp everything it has to offer.

I had intended to write only one book but long before the first book was finished it became obvious to me that the story I had been given would not be contained by it. It seemed to fall naturally into three parts but was written without a break as one overarching story. I wrote it all out longhand in four large notebooks between September 1999 and April 2001. From June 2001 to March 2002 I rewrote onto the computer. In the second half of this period Across the Nightingale Floor, which I finished in September 2001, was going through the editorial process: hardly a sentence was changed in any of its editions.

Learn More About Across the Nightingale Floor
print

Brilliance of the Moon

The Harsh Cry of the Heron

Sons of Thunder
Back to Top