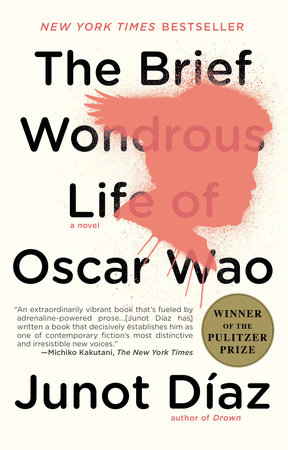 Winner of the Pulitzer Prize for fiction, The Brief Wondrous Life of Oscar Wao tells the story of Oscar, a sweet but disastrously overweight ghetto nerd, a New Jersey romantic who dreams of becoming the Dominican J. R. R. Tolkien and, most of all, of finding love. But he may never get what he wants, thanks to the fukú—the ancient curse that has haunted Oscar’s family for generations, dooming them to prison, torture, tragic accidents, and ill-starred romance. Oscar, still dreaming of his first kiss, is only its most recent victim—until the fateful summer that he decides to be its last.

With dazzling energy and insight, Junot Díaz immerses us in the uproarious lives of our hero Oscar, his runaway sister Lola, and their ferocious mother Belicia, and in the family’s epic journey from Santo Domingo to New York City’s Washington Heights to New Jersey’s Bergenline and back again. Rendered with uncommon warmth and humor, The Brief Wondrous Life of Oscar Wao presents an astonishing vision of the contemporary American experience and the endless human capacity to persevere—and to risk it all—in the name of love.

A true literary triumph, this novel confirms Junot Díaz as one of the best and most exciting writers of our time.

“Genius…A story of the American experience that is giddily glorious and hauntingly horrific…That Díaz’s novel is also full of ideas, that [the narrator’s] brilliant talking rivals the monologues of Roth’s Zuckerman—in short, that what he has produced is a kick-ass (and truly, that is the just word for it) work of modern fiction—all make The Brief Wondrous Life of Oscar Waosomething exceedingly rare: a book in which a new America can recognize itself, but so can everyone else.” —Oscar Villalon,San Francisco Chronicle

“Terrific…Narrated in high-energy Spanglish, the book is packed with wide-ranging cultural references—to Dune, Julia Alvarez, The Sound of Music—as well as erudite and hilarious footnotes on Caribbean history. It is a joy to read, and every bit as exhilarating to reread.” —Jennifer Reese, Entertainment Weekly

Born in Santo Domingo, the Dominican Republic, and raised there and in New Jersey, Junot Díaz graduated from Rutgers and received an MFA from Cornell. He lives in New York City and Boston, and is a tenured professor at MIT.

Junot Díaz has had his fiction published in The New Yorker and The Paris Review, and four times in The Best American Short Stories. His critically praised, bestselling debut book, Drown, led to his inclusion among Newsweek’s “New Faces of 1996”—the only writer in the group. The New Yorker placed him on a list of the twenty top writers for the twenty-first century. Díaz has won the Eugene McDermott Award, the Lila Wallace–Reader’s Digest Writers’ Award, the PEN/Malamud Award, a Guggenheim Fellowship, a Radcliffe Institute for Advanced Study Fellowship, a U.S.-Japan Creative Artists Fellowship from the NEA, and most recently the Rome Fellowship from the American Academy of Arts and Letters.

The Stories of John Cheever

The Thing Around Your Neck
Back to Top