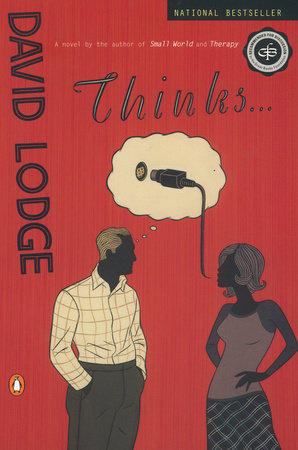 The different kinds of mental pictures we form of the mind at work would seem extraordinarily difficult material for a novel. But the British writer David Lodge is no ordinary novelist, and a plot depicting turf wars over the meaning of consciousness proves richly entertaining in his eleventh novel, Thinks…. Much as Elmore Leonard is king of the contemporary hard-boiled mystery, Lodge has established himself as master of the academic novel. Though both authors could be described as genre writers, they display a wicked sense of humor and elude the predictability of formulaic writing. Well-versed in literary theory and a gifted mimic of other writers, Lodge also is known for his skill in wrapping readers in a story that is simultaneously funny, gripping, and thought-provoking.

Thinks… is energized by a class of values within the confines of the University of Gloucester, where a cognitive scientist, Ralph Messenger, and a humanist, visiting creative-writing instructor and novelist Helen Reed, square off over fundamental questions of human consciousness: What is it? How do we understand it? Whose discipline has the proper tools for exploring it? Ralph—who impatiently dismisses those like Helen who think these questions may be unanswerable as “mysterians”—asserts that “the brain is more like a parallel computer…running lots of programs simultaneously” (p. 38). This view of the mind leads to puzzles about how the self grows to recognize itself as a self and whether machines are capable of self-awareness. When Ralph explains to Helen that some autistic people have extraordinary abilities in a particular field, leading them to be labeled with the now discarded term idiots savants, Helen suggests with a hint of sarcasm, “Computers are a bit like that, aren’t they?” (p. 240).

The struggle between traditional humanist understanding and modern scientific method—a rivalry dating at least to the beginning of the Enlightenment—affects the answers to such questions about consciousness, but Lodge invests the battle with the personal charms and foibles of his protagonists. Ralph Messenger, known to most of his colleagues as “Ralph,” but as “Messenger” to his family and intimate friends, is a gregarious family man, beloved father, and serial adulterer who never hesitates to proposition any attractive female in striking distance. He believes in the explanatory power of the scientific method and is fond of lacing his seduction patter—especially with an audience as literate and intelligent as Helen—with learned references to sociobiological triggers for sex. Helen, in turn, observes rather judgmentally that the scientists working for Ralph at his well-financed Centre for Cognitive Science “have decided that consciousness is a ‘problem’ which has to be ‘solved’ ” (p. 61).

For her part, Helen is trying to solve the problem of bereavement. Following the recent death of her husband, she considers the invitation to teach a course at Gloucester an opportunity to carry on her professional life and make a new start. Both Helen and Ralph keep extensive journals—Ralph tapes stream-of-consciousness ramblings as part of one of his experiments, while Helen writes a more conventional diary. Interspersed among the characters’ e-mail is the voice of the novel’s omniscient narrator. The result is a layering of competing perspectives on the same events. While Helen wrestles with her Catholic conscience over her affair with Ralph, Ralph sees metaphysics and religion as the result of Homo sapiens becoming “the first and only living being in evolutionary history to discover he was mortal” (p. 101). The characters’ differing views of morality raise the question of how one’s beliefs are connected to one’s conduct: Do belief systems or rigorous analytical thinking correlate with the quality of one’s character?

Thinks… is far more than a bawdy tale of romantic couplings punctuated with smart dialogue on mind, matter, and the nature of consciousness. In this novel Lodge shows himself conversant with the twentieth-century debate over the nature of mind; the book is influenced by a number of philosophical works, from Gilbert Ryle’s milestone Concept of Mind (1949), which attacked the Western dualistic notion of the “ghost in the machine,” to Thomas Nagel’s 1974 article “What Is It Like to Be a Bat?” In one of the novel’s funniest sections, Ralph tells Helen about Nagel’s thought experiment as well as his conclusion that there is simply no way to know what the experience of being a different creature would be like. Undaunted, Helen tries out Nagel’s question as a prompt in her creative-writing class. The results are hilarious: We are treated to parodic first-person bat narratives in the manners of Martin Amis, Salman Rushdie, and Samuel Beckett. If we cannot know the experience, we can at least imagine it, though it is doubtful that the results will meet the criteria for scientific rigor. Ralph himself recognizes a conundrum for proponents of strictly scientific knowledge: The scientific enterprise requires imaginative ability. Describing his theory that the puzzle of consciousness is more likely to be solved by a computer than by a human being, he acknowledges, “The question is, will we recognize it when we see it?” (p. 229). If not by an act of imagination, how?

David Lodge was born in London and received a Catholic education before attending University College, London, from 1952 to 1955. His first novel, The Picturegoers, was published in 1960. He wrote his master’s thesis on Catholic fiction and was a professor for nearly thirty years at the University of Birmingham, retiring in 1987.

Lodge has also written widely on literary theory, showing himself both deeply engaged with and amused by poststructuralist, feminist, reader-response, Marxist, and psychoanalytic theories of the text. Language and Fiction (1966) established Lodge as an influential critic, and his other works of criticism include Working with Structuralism(1981) and After Bakhtin: Essays on Fiction and Criticism (1990). Lodge’s eleven novels have earned numerous awards, including the Hawthornden Prize for Changing Places (1975) and the Whitbread Book of the Year for How Far Can You Go?(1980). Small World (1984) and Nice Work (1988) were shortlisted for the Booker Prize. For his service to literature he was awarded the distinction of Commander of the British Empire in 1988.

Kingsley Amis, Lucky Jim (1954)
This satiric novel about post-World War II university life in England, which tears into the country’s calcified class structure, has been a major influence on all academic novels since.

Rebecca Goldstein, The Mind-Body Problem: A Novel (1983)
A graduate student in philosophy at Princeton marries a famous mathematics professor, only to discover that she has multiplied her difficulties in reconciling the intellectual and practical sides of her life.

Richard Russo, Straight Man (1997)
William Henry Devereaux Jr. is the beleaguered chair of a small university’s English department. When he cannot get next year’s budget from his unreliable dean, he resorts to the desperate measure of threatening to kill a duck on live television.

Jane Smiley, Moo (1997)
The academic hijinks in this novel have a distinctly allegorical flavor: What can it mean when a large group of experimental livestock languishes in obscurity at the center of a Midwestern research university?

Shrines of Gaiety
Kate Atkinson
Back to Top