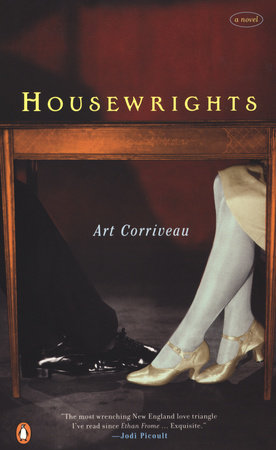 Set in a small Vermont town in the early decades of the twentieth century, Housewrights tells the story of Lily Willard, the town librarian, and her relationship with Oren and Ian Pritchard, housewrights who roam New England building houses for others though they themselves are homeless. Lily first meets the twins when they are children, and the boys arrive with their father to build Lily’s family a new farmhouse. Ten years later, Oren returns for Lily. He asks her to marry him. She agrees, if he will settle down-for the first time in his life. Always lurking, though, is the question of Ian, off fighting the Great War. But when he returns, shell-shocked and wounded, Lily welcomes him into their home. Eyebrows are raised only silently at this unusual household, until one evening at the Grange Hall dance the three take a heady, impetuous waltz together-with practically the entire town watching.

Rich in detail and emotion, this unforgettable novel marks the debut of a singular storyteller who writes with extraordinary beauty, depth, and clarity.