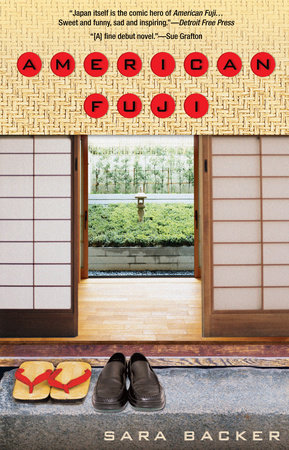 Gaby Stanton, an American professor living in Japan, has lost her job teaching English at Shizuyama University. (No one will tell her exactly why.) Alex Thorn, an American psychologist, is mourning his son, a Shizuyama exchange student killed in an accident. (No one will tell him exactly how.) Alex has come to this utterly foreign place to find the truth, and now Gaby—newly employed at a Japanese “fantasy funeral” company—is his guide. Gaby, at least, can speak the language, though as she explains to Alex, the key to mastering Japanese is understanding what’s not being said. And in this dazzling, unusual novel, the unsaid truths about everything from work and love to illness and death cast a deafening silence—and tower in the background like Mount Fuji itself.

ABOUT SARA BACKER
Sara Backer was the first American and the first woman to serve as visiting professor of English at Japan’s Shizuoka University. An early draft of American Fuji was named a finalist in the James Jones First Novel Competition, and a play she wrote as a Djerassi artist in residence was chosen for performance at the Edward Albee Theatre Conference in June 2000. A published poet and short-story writer, Backer lives in San Luis Obispo, California.
DISCUSSION QUESTIONS

Sisters of Heart and Snow

Tomorrow in the Battle Think on Me

A Splendid Gift
Back to Top