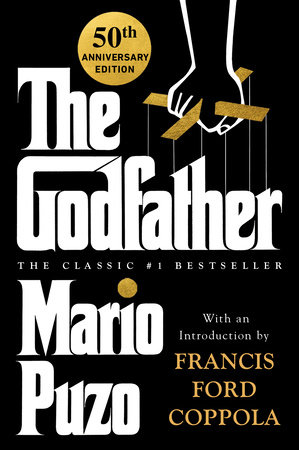 INTRODUCTION
With its brilliant and brutal portrayal of the Corleone family, The Godfather instantly burned its way into the national consciousness—and became one of the bestselling novels in publishing history. It is a page-turning saga of crime and corruption, passion and loyalty that continues to stand the test of time as the definitive gangster novel. It tells the story of the Corleone family from 1945 to 1955: Don Vito Corleone, who comes to America as a child and whose olive oil importing business is a front for organized crime; and his three sons: violent, passionate Sonny, quiet, dutiful Fredo, and Michael, the youngest and most Americanized. While Sonny and Fredo each have qualities that make them useful to the don, it is clear to most observers that Michael is the heir apparent. A World War II hero who then attended Dartmouth, Michael is bright and aware. He is torn between the desire to isulate himself from the family business and his intense loyalty to his father’s legacy of honor and tradition.

The son of Italian immigrants who moved to the Hell’s Kitchen neighborhood of Manhattan, Mario Puzo was born on October 15, 1920. After World War II, in which he served as a U.S. Army corporal, he attended City College of New York on the G.I. Bill and worked as a freelance writer. During this period he wrote his first two novels, Dark Arena (1955) and The Fortunate Pilgrim (1964). When his books made little money despite being critically acclaimed, he vowed to write a bestseller. Although he had difficulty finding a publisher for it, The Godfather (1969) proved to be an enormous success. Puzo collaborated with director Francis Ford Coppola on the screenplays for all three Godfather films and won Academy Awards for both The Godfather (1972) and The Godfather, Part II (1974). He also collaborated on scripts for such films as Superman (1978) andThe Cotton Club (1984). He continued to write bestselling novels, including Fools Die (1978), The Sicilian (1984), The Fourth K. (1991) and The Last Don (1996). Mario Puzo died on July 2, 1999. Two of his novels were published posthumously,Omerta in 2000 and The Family in 2001.

The following answers are drawn from The Godfather Papers by Mario Puzo published in 1972 by G.P. Putnam’s Sons.

When did you first start writing?

I wrote my first short story when I was seventeen and wrote dozens more before any of them were accepted for publication. Luckily most of these stories have been lost. I switched to plays and they were worse. Finally, after World War II, at the age of twenty-eight I started my first novel. I knew immediately that this was what I wanted to do for the rest of my life.

My first novel, The Dark Arena (1955), received mostly very good reviews saying I was a writer to watch. Naturally I thought I was going to be rich and famous. The book netted me $3500 and I still didn’t know I had a whole fifteen years to wait. My second novel, The Fortunate Pilgrim, was published ten years later (1965) and netted me $3000. I was going downhill fast. Yet the book received some extraordinarily fine reviews. The New York Times called it a “small classic.” I even like the book myself and immodestly think of it as art.

How did you come to write The Godfather?

I wrote it to make money. The editors didn’t like the idea behind my next novel. It sounded like another loser. One editor wistfully remarked that if Fortunate Pilgrim had only had a little more of that Mafia stuff in it maybe the book would have made money. (One of the minor characters was a mob chief.) I was forty-five years old and I owed $20,000 to relatives, finance companies, banks and assorted bookmakers and shylocks. It was really time to grow up and sell out as Lenny Bruce once advised. So I told my editors OK, I’ll write a book about the Mafia.

But then wasn’t it rejected?

I wrote a ten-page outline. They showed me the door again. There is no way to explain the terrible feeling of rejection, the damage.

So how did it finally get published?

Nobody would take me. Months went by. One day a writer friend dropped into my magazine office. As a natural courtesy I gave him a copy of The Fortunate Pilgrim. A week later he came back. He thought I was a great writer. I bought him a magnificent lunch. During lunch I told him some funny stories about the Mafia and my ten-page outline. He was enthusiastic. He arranged a meeting for me with the editors of G. P. Putnam’s Sons. The editors just sat around for an hour listening to my Mafia stories and said go ahead. They also gave me a $5000 advance and I was on my way.

Did you have any first-hand knowledge about the Mafia?

I’m ashamed to admit that I wrote The Godfather entirely from research. I never met a real honest-to-god gangster. After the book became “famous,” I was introduced to a few gentlemen related to the material. They were flattering. They refused to believe I was never in the rackets. They refused to believe I had never been in the confidence of a Don.

What do you think of the book now?

The Godfather is my least favorite novel, but I hate when it’s knocked simply because it was a bestseller. And it’s not a lucky bestseller but the product of a writer who practiced his craft for nearly thirty years and finally got good at it. I wished like hell I had written it better [but] I like the book. It has energy.

Did you always want to be a writer?

As a child I had the usual dreams. I wanted to be handsome, specifically as cowboy stars in movies were handsome. I wanted to be a killer hero in a worldwide war. Or if no war came along (our teachers told us another was impossible), I wanted at the very least to be a footloose adventurer. Then I branched out and thought of being a great artist, and then, getting more sophisticated, a great criminal. My mother however, wanted me to be a railroad clerk. And that was her highest ambition; she would have settled for less. At the age of sixteen, when I let everybody know I was going to be a great writer, my friends and family took the news quite calmly, my mother included. She did not become angry. She quite simply assumed I had gone off my nut.

Whatever happened to your criminal ambitions?

I had every desire to go wrong but I never had a chance. The Italian family structure was too formidable. I never came home to an empty house; there was always the smell of supper cooking. My mother was always there to greet me, sometimes with a policeman’s club in her hand (nobody ever knew how she acquired it). But she was always there, or her authorized deputy, my older sister, who preferred throwing empty milk bottles at the heads of her little brothers when they got bad marks on their report cards.

Learn More About The Godfather
print

The Spy Who Came in from the Cold

The Pillars of the Earth

The Hunt for Red October
Back to Top