Noli Me Tangere (Touch Me Not) Reader’s Guide 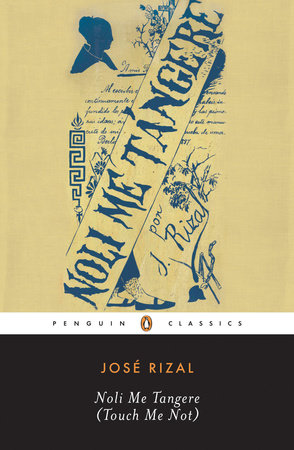 Noli Me Tangere (Touch Me Not) Reader’s Guide

print
Noli Me Tangere (Touch Me Not) Reader’s Guide

Written in Spanish and published in 1887, José Rizal’s Noli Me Tangere played a crucial role in the political history of the Philippines. Drawing from experience, the conventions of the nineteenth-century novel, and the ideals of European liberalism, Rizal offered up a devastating critique of a society under Spanish colonial rule.

The plot revolves around Crisostomo Ibarra, mixed-race heir of a wealthy clan, returning home after seven years in Europe and filled with ideas on how to better the lot of his countrymen. Striving for reforms, he is confronted by an abusive ecclesiastical hierarchy and a Spanish civil administration by turns indifferent and cruel. The novel suggests, through plot developments, that meaningful change in this context is exceedingly difficult, if not impossible.

The death of Ibarra’s father, Don Rafael, prior to his homecoming, and the refusal of a Catholic burial by Padre Damaso, the parish priest, provokes Ibarra into hitting the priest, for which Ibarra is excommunicated. The decree is rescinded, however, when the governor general intervenes. The friar and his successor, Padre Salvi, embody the rotten state of the clergy. Their tangled feelings—one paternal, the other carnal—for Maria Clara, Ibarra’s sweetheart and rich Capitan Tiago’s beautiful daughter, steel their determination to spoil Ibarra’s plans for a school. The town philosopher Tasio wryly notes similar past attempts have failed, and his sage commentary makes clear that all colonial masters fear that an enlightened people will throw off the yoke of oppression.

Precisely how to accomplish this is the novel’s central question, and one which Ibarra debates with the mysterious Elias, with whose life his is intertwined. The privileged Ibarra favors peaceful means, while Elias, who has suffered injustice at the hands of the authorities, believes violence is the only option.

Ibarra’s enemies, particularly Salvi, implicate him in a fake insurrection, though the evidence against him is weak. Then Maria Clara betrays him to protect a dark family secret, public exposure of which would be ruinous. Ibarra escapes from prison with Elias’s help and confronts her. She explains why, Ibarra forgives her, and he and Elias flee to the lake. But chased by the Guardia Civil, one dies while the other survives. Convinced Ibarra’s dead, Maria Clara enters the nunnery, refusing a marriage arranged by Padre Damaso. Her unhappy fate and that of the more memorable Sisa, driven mad by the fate of her sons, symbolize the country’s condition, at once beautiful and miserable.

Using satire brilliantly, Rizal creates other memorable characters whose lives manifest the poisonous effects of religious and colonial oppression. Capitan Tiago; the social climber Doña Victorina de Espadaña and her toothless Spanish husband; the Guardia Civil head and his harridan of a wife; the sorority of devout women; the disaffected peasants forced to become outlaws: in sum, a microcosm of Philippine society. In the afflictions that plague them, Rizal paints a harrowing picture of his beloved but suffering country in a work that speaks eloquently not just to Filipinos but to all who have endured or witnessed oppression.

Born on June 19, 1861, José Rizal was from an upper-class Filipino family. His mother, Teodora Alonso, a highly educated woman, exerted a powerful influence on his intellectual development. He would grow up to be a brilliant polymath, doctor, fencer, essayist, and novelist, among other things.

By the late nineteenth century, the Spanish empire was in irreversible decline. Spain had ruled the islands since 1565, except for a brief hiatus when the British occupied the islands in 1762. The colonial government was unresponsive and often cruel, with the religious establishment wielding as much power as the state. Clerical abuses, European ideas of liberalism, and growing international trade fueled a burgeoning national consciousness. For Rizal and his generation, the 1872 Cavite Mutiny, in which three native priests were accused of treason and publicly executed, provided both inspiration and a cautionary tale.

Educated at the Jesuit-run Ateneo de Manila and the Dominican University of Santo Tomas in Manila, Rizal left for Spain in 1882, where he studied medicine and the liberal arts, with further studies in Paris and Heidelberg. The charismatic Rizal quickly became a leading light of the Propaganda Movement—Filipino expatriates advocating, through its newspaper, La Solidaridad, various reforms such as the integration of the Philippines as a province of Spain, representation in the Cortes (the Spanish parliament), the Filipinization of the clergy, and equality of Filipinos and Spaniards before the law. To Rizal, the main impediment to reform lay not so much with the civil government but with the reactionary and powerful Franciscan, Augustinian, and Dominican friars, who constituted a state within a state.

In 1887, he published his first novel, Noli Me Tangere, written in Spanish, a searing indictment of clerical abuse as well as of colonial rule’s shortcomings. That same year, he returned to Manila, where the Noli had been banned and its author now hated intensely by the friars. In 1888, he went to Europe once more, and there wrote the sequel, El Filibusterismo (The Subversive), published in 1891. In addition, he annotated an edition of Antonio Morga’s Sucesos de las Islas Filipinas, showing that the Philippines had had a long history before the advent of the Spaniards. Rizal returned to Manila in 1892 and founded a reform society, La Liga Filipina, before being exiled to Dapitan, in Mindanao, Southern Philippines. There he devoted himself to scientific research and public works. Well-known as an ophthalmologist, he was visited by an English patient, accompanied by his ward, Josephine Bracken, who would be his last and most serious romantic involvement.

In August of 1896, the Katipunan, a nationalist secret society, launched the revolution against Spain. Its leaders venerated Rizal and tried to persuade him to their cause. He refused, convinced that the time was not yet ripe for armed struggle. In the meantime he volunteered to serve as a doctor with the Spanish forces fighting against Cuban revolutionaries. En route, Rizal was arrested and subjected to a mock trial in Manila by the authorities although he had nothing to do with the revolution. Found guilty, he was shot at dawn on December 30, 1896. On the eve of his execution, Rizal penned “Mi último adiós” (My Last Farewell), considered a masterpiece of nineteenth-century Spanish verse. He was thirty-five.

Rizal’s martyrdom only intensified the ultimately successful fight for independence from Spain. Because of his role in shaping his country’s destiny, José Rizal is often described as the “First Filipino” and has since served as an inspiration to countless nationalists and intellectuals.

Luis H. Francia, the author of this guide, was born and grew up in Manila, Philippines, where he obtained his B.A. in humanities from the Ateneo de Manila University—the same alma mater as that of José Rizal, author of Noli Me Tangere. He teaches Filipino language and culture at the Asian/Pacific/American Studies program of New York University. He has taught Asian-American literature at Sarah Lawrence College and at the University of Hawai’i at Manoa.

He has written several books, the most recent ones being Museum of Absences, a collection of poems, and the semiautobiographical Eye of the Fish: A Personal Archipelago, winner of both the 2002 PEN Open Book and the Asian American Writers Workshop Literary awards. He is the editor of Brown River, White Ocean, an anthology of Philippine literature in English, and coeditor of Flippin’: Filipinos on America, also a literary anthology, and of Vestiges of War, an anthology of creative and scholarly works dealing with the 1899 Philippine-American War.

He and his wife, art historian and curator Midori Yamamura, live in New York City.

Learn More About Noli Me Tangere (Touch Me Not)
print

The Cairo Trilogy
Back to Top