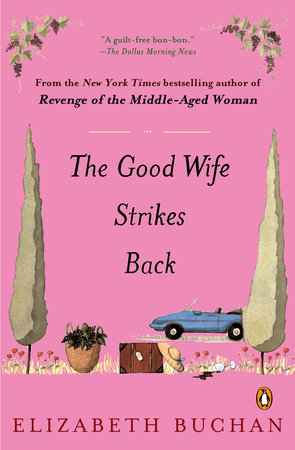 On Fanny and Will Savage’s nineteenth wedding anniversary, they attend Ibsen’s A Doll’s House. In the play, the main character, Nora, struggles to break free from social conventions. Elizabeth Buchan could not have chosen a more appropriate opening to The Good Wife Strikes Back, a novel in which Fanny, the wife of a career politician, finds herself at a personal crossroads after nearly two decades of marriage. In depicting Fanny’s “creeping restlessness and growing sense that it was time for a change” and her path toward personal fulfillment, the author paints a bittersweet yet tender portrait of an imperfect marriage, the bonds of family, and finally—contentment.

Fanny’s journey to reclaim her identity awakens in her a yearning to return to her aging father’s wine business. When he dies suddenly of a heart attack, Fanny decides she must go to Fiertino, Italy, her father’s birthplace, to scatter his ashes. There, against her husband’s wishes, Fanny sets up a makeshift home in Italy, where she begins to reflect upon all of the years spent caring for other people—her alcoholic sister-in-law, Meg; her daughter, Chloe; Will and his career—and to wonder what toll those years have taken on her. One morning, sitting on Casa Rosa’s steps, she wonders, “How often do we have time to seek our secret selves and bring them to light? To examine and say, with delighted recognition, so this is what I am? This is what I might be? This is where I will go?” But confrontations also await Fanny in Fiertino when Meg arrives in a whirlwind, forcing both women to confront the complexities of their relationship.

Then a sudden accident tests the true fabric of the Savage family, and Fanny leaves Italy to return to Stanwinton, where a changed world awaits her. Will has lost a family member as well as his political office. Chloe is traveling and discovering herself, so their nest is empty. Together, the couple must rebuild their lives without the bustle of their daughter or the trappings of Will’s career or Meg’s ever-looming illness. In the end, Fanny discovers that one of her lifelong passions is a perfect metaphor to describe what she’s learned about life: “If good wine takes time to make, and I know it does, so does a home. It was just that we, it, and the family had taken a little while to come together, to settle down, and grow a ripeness and body.”

Elizabeth Buchan is the author of eight novels, including the prize-winning Consider the Lily and the bestselling Revenge of the Middle-Aged Woman. She lives in London.

AN INTERVIEW WITH ELIZABETH BUCHAN

Your previous novel, Revenge of the Middle Aged Woman, also revolved around a marriage—albeit one in greater disarray than Fanny and Will’s. Do you find marriage a particularly rich area for a writer? If so, why?

From the novelist’s point of view, marriage is an endlessly fertile theme. It can wither, flourish, demand, cradle, discourage, and encourage—sometimes all at the same time. Most of us embark, at one time or another, on a long-term partnership, and, with women now liberated, the challenge is how to make it work on this new basis.

There are statistics that count infidelity as the number-one reason for divorce. After Will’s transgression, were you able to forgive him? Did you want his character to be seen as a sympathetic one?

Will is guilty of a moment’s stupidity and carelessness—and most of us are guilty of that in one form or another. He should be forgiven. Having said that, his infidelity has consequences and he has to face up to them. I conceived of him in a sympathetic light but it is true that he does, in the first part of marriage, get away with quite a lot. One of the points of the book was to suggest that men’s and women’s lives operate in different ways. As Will grows older and less successful than he hoped, it is clear that Fanny, who is now free of child care and is consequently surer and more experienced, can step into the breach and negotiate what she wants from a position of much greater strength.

Did you know the outcome of this novel when you began or did Fanny take on a life of her own and drive the plot herself? Generally, how close do you become to your characters?

Yes, I had the form and structure of the novel very clear in my head from the first. But, as usual, I was surprised by what happened in the journey from A to Z. That is one of the pleasures of writing and creating. I love my characters and I know that the book is beginning to take life when I wake up in the morning with a piece of dialogue or a plot ratchet as first my conscious thought. Fanny was always there in my head—she and I talked often! She is not the kind of woman who is going to run the country—the majority of us are not—but I wanted her to be the sort of character whom one meets every day and who tries to live her life with grace.

Which of the characters was the most difficult for you to make a real, multifaceted person? Why?

Will was difficult. He comes from a long line of alpha males who were used to making certain assumptions about their wives and families. Tracing his journey from the young man with ideals to the older man whose ideals have dwindled into ambition took a lot of thought.

How do you feel about marriage? Do you think it will survive as an institution as relationships between men and women continue to evolve into something different than they were decades ago?

Possibly. Having said that, marriage is about the one institution that can still root us, and most of us crave some kind of security in our daily lives. Yet perhaps a greater realism has to be faced as we are living longer, and fidelity—the physical kind—will come not to be regarded as an absolute.

Which novelists have influenced your writing the most? What are you reading now?

I think it is very difficult to escape the influence of the great nineteenth-century novelists—Jane Austen, George Eliot, Flaubert, and Tolstoy—who set such high standards. I admire hugely Scott Fitzgerald, Evelyn Waugh, Ian McEwan, and Margaret Atwood. For the days when one needs a reading lollipop, I retire to the sofa with Nancy Mitford or P. D. James. I have just finished reading Siri Hustvedt’s What I Have Loved, which is sensationally good.

My latest novel takes two very different women, one contemporary and one in the 1950s, and compares and contrasts their intimate, inner lives. As they try to make sense of the conflicting demands of liberation and duty, freedom and the constraints of biology and time, they become linked in a variety of surprising ways.

Learn More About The Good Wife Strikes Back
print

The Yellow Eyes of Crocodiles

The Lesser Bohemians
Back to Top